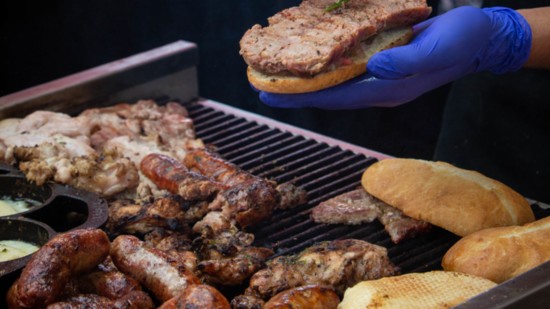 The Taste of Home

Lucas De Cesco cherishes Sundays. Growing up in the mid-sized city of Neuquén in Argentina, every Sunday was identical: spent with his loved ones enjoying asado, the practice of gathering for a traditional barbecue around the family grill.

“There is a whole ceremony around it,” he says. “For everyone in Argentina, Sunday is an important day of the week. It’s all about getting together with family and having a feast together, usually lunch. My dad will buy the meat and light the fire, and everyone else will bring foods to share. It’s always a nice break for catching up with family and talking about plans for the next week.”

De Cesco and his wife Silvina Rodriguez have created a fitting tribute to these sacred Sundays with Domingo Sausage Co., their new venture featuring homemade sausages and other traditional foods just like the kind they were raised on. (And Domingo is, of course, the Spanish word for Sunday). If you visited the farmers markets in Basalt, Carbondale, or Glenwood Springs this summer, you’ve surely smelled—and hopefully tasted—the savory, succulent fruits of their grill.

“This summer we did three options,” De Cesco explains. “Our signature dish is choripan, which is basically the definition of Argentinian street food. Then we have mollejas, or beef sweetbreads. And the third is provoleta, a classic in Argentina.”

The choripan is a handmade pork sausage grilled to order, tucked in a butterfly-cut bun made by Susan DeCillis of The Upper Crust, and doused with flavorful salsa criolla and bright, herby chimichurri. De Cesco notes that in his home country this particular dish is iconic, often synonymous with soccer culture.

“When you go out after every soccer game, there are yards of grill after grill on the streets doing sausage for choripan,” he says.

Mollejas is a dish that many Americans aren’t accustomed to, made with the thymus glands of calves. But De Cesco says that in Argentina, this delicacy is a sought-after staple of steakhouses and upscale restaurants. It would not be found just anywhere, or at any time.

“It’s kind of like the caviar of the grill,” he says, laughing. “People here in the valley are not used to this type of food but once they try it, they can’t stop asking for it.”

Last but not least, the Domingo Sausage Co. version of the provoleta may just be the richest and most satisfying cheese sandwich you’ll ever taste. Picture a thick round of grilled provolone with oregano, paprika, and crushed peppers, draped atop a slice of freshly toasted bread. It’s wonderfully indulgent and filling.

“We eat a lot of meat in Argentina, but we know that many people here don’t,” De Cesco says. “So this was a great option for vegetarians, or just people who love cheese.”

Earlier this summer, he was busy working the grill during the Glenwood farmers market when a customer stopped by and began reading the menu board. The man froze and stood in silence for an extended time, so De Cesco became worried—was something wrong?

“I couldn’t see what was happening because he was wearing a mask due to the coronavirus,” he recalls. “But then I realized, his eyes were full of tears. It turns out he was from Argentina, but had lived in the valley for many years, and he hadn’t had choripan or these classic dishes in a really long time. He couldn’t believe it. He was so thankful.”

The sausage maker understandably feels emotional when recounting this story.

Home. De Cesco himself knows that home doesn’t always mean a location; it can mean a flavor, too. After relocating permanently to the valley in May 2019, he wasn’t able to find the traditional comfort foods that he had always loved in Argentina. So, with the help of a sausage recipe from his uncle Martin Benitez, a butcher who inspired him during many family barbecues over the years, he began to make his own. De Cesco had been planning to continue his career as a filmmaker and video producer with the Carbondale-based company Alchemy Concert Systems (he has been working and traveling between the valley and Buenos Aires for nearly 14 years), but then: Covid-19. Earlier this spring, he saw the entire summer event season disappear in the fog of public health restrictions.

“Without the work season with Alchemy, I decided to try something else,” he says. “I had been making sausages at home, and was giving them to friends. I’ve always loved to grill and to cook, since I was a kid.” De Cesco’s love of cooking developed in childhood, over many idyllic summers spent experimenting in the kitchen of his parents’ hotel in Copahue, a mountain hot springs village in Patagonia. “Here in the valley, when I started making the style of foods I grew up with, people encouraged me to try the farmers markets. And really, that’s when Domingo Sausage Co. was born.”

De Cesco hit the ground running to prepare for the summer markets. He contacted the Colorado Small Business Development Center, which connected him with Carbondale consultant Chris Karol, and received food safety guidance from the Eagle County Environmental Health Department. He also credits Yanina Dobarro of The Whole Empanada for offering inspiration and advice. Soon, Domingo Sausage Co. was making its public debut. Over the course of the summer, the business became a full-time operation. During calls to his family back in Argentina, De Cesco was thrilled to announce the new venture’s success.

And then, something magical happened.

“I was talking to them about making sausage here, and suddenly, all of these amazing stories of butchers and sausage makers in the family started to arise. I had no idea,” he says. “I learned that my great-grandfather, when he came from Spain to Argentina, made sausages and would deliver them. My wife’s grandfather, whose name was Domingo, was also a sausage maker. And there are more beyond those.”

He thought, “OK, well maybe this is just in my DNA and that’s why I enjoy it so much.”

Now that the busy market season has ended for the year, De Cesco will spend the winter making sausages, doing weekly deliveries around the valley, contemplating a possible grilling joint in Snowmass, and laying out a plan for 2021. Reflecting on the turns of life over the past several months, he says he is filled with nothing but gratitude for the way things have unfolded. Domingo Sausage Co.’s success is proof of the ancient truth that food is a bridge across time, cultures, and miles.

“I’ll tell you this, I’m so happy right now. It’s really comforting to be able to cook for people, to feed people,” he reveals. “Just seeing the look on their faces when they’re enjoying the food—it’s a great feeling.”