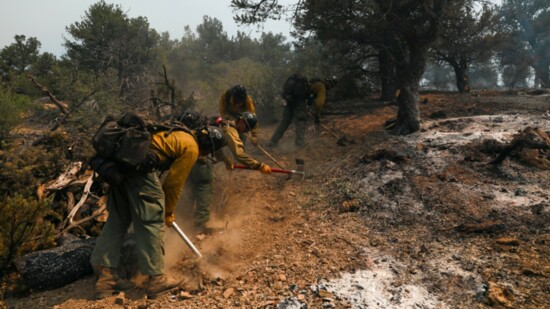 Reflections on the Grizzly Creek Fire

For One Local Outdoorswoman, Gratitude is Complicated

Gratitude after a year like this can be hard to find. Every week has been a scene in a movie where some idiot says, “At least things can’t get any worse.” The platitudes about how we should be grateful because we have a roof over our heads and family nearby sound hollow. Many don’t have those things anymore. In the season of gratitude, we are all grieving something: a loved one, a dream, an opportunity, a canyon.

In August, watching the Grizzly Creek Fire burn felt personal. It felt mean and pointless. Weeks passed before I could even think the word gratitude.

But when we let her do her job, gratitude is the one who walks behind grief and anger, picking up the broken pieces of memory and reality. Sometimes the pieces are sharp, or heavy, or marred beyond recognition, but gratitude still collects them carefully. She knows that those pieces will never fit back together the same way, but that perhaps some of them can be used to build something new.

The Glenwood Canyon that we knew has changed, and the full impacts of the Grizzly Creek Fire will not be known for many years. Yet, we still need to let gratitude walk through our memories, gathering all those pieces. Here are a few fragments that are found in mine. I’m not sure what they will become in the future, but I know that they will be important. What are yours?

Ten days before the fire started, my children’s feet and mine were on Grizzly Creek Trail. Summer blue skies and the lack of crowds before 10 a.m. were inviting. Excitement rose as we found the tasty red berries hidden by enormous leaves in the shade of scrub oak and elm trees.

Good Times on a Raft

One Monday, I was floating from Shoshone downstream with my best girlfriends. We drank good beer, enjoyed the quiet of late afternoon, and soaked in the natural hot pots along the way. We didn’t imagine that it would be our last float through the canyon this year.

The next Monday, an impossible mushroom cloud rose in the early afternoon on August 10 as the fire started. At Veltus Park, neither the kids digging in the wet sand, nor the parents nearby had any idea what they were seeing.

Raft guides from local companies watched the infant fire roar to life. Their boats, yellow and blue, floated inevitably past the flames which soon reached above twenty feet, swallowing the trees. They discussed having clients jump in the water as the heat became intense. They couldn’t go back, couldn’t go around; they had to float through it.

Through the webcams, for hours, I watched one small helicopter, or maybe two, making drop after drop. On my laptop screen from a grainy camera a mile away from the action, the buckets looked tiny, but each drop was so precise that the flames could not cross the ridge. The helicopters held back the fire from the old pines and fuel which would have run them straight to the top of Lookout Mountain.

Every Room in Our House is a Mess

As the red glow over No Name Canyon seemed to dominate the thoughts, if not the skyline of the residents in town, everyone was whispering the word evacuation. I took pictures of all our belongings in case we had to file an insurance claim for fire damage. I remember thinking how much ‘stuff’ appeared in every photo, yet, the list of things I would actually take with me was so short.

They did evacuate, waiting and worrying for days to discover if their homes were safe. Finally, they could return, though everything still smells like smoke.

Suffering in the heat and choking on the smoke, so many cities found themselves in an unwanted sisterhood, their mountains on fire. We realized we were not alone, but wished we were.

Quiet Hours in the Riparian Zone

I’ve only driven through the canyon twice since the fire. The trees are black, but the low banks of the river were mostly spared. I know the wildlife is grateful to have some peace after this brutally hot summer. No boaters floating through every three minutes to disturb them while they drink, no ebikes whizzing by, stressing them off the trail.

It isn’t over, yet. Even though the flames and the smoke will fade, Glenwood Canyon will be living with the echoes of this fire for years. Mudslides and rockfall in the spring will be followed by another summer, and another fire season. Our community will certainly be faced with more challenges, both natural and man-made. And so we let gratitude collect what it can, and hope that by the time we need them again, all the pieces make sense.