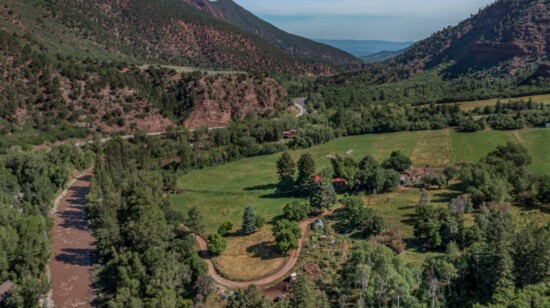 It’s a hot morning in late July at Dooley Creek Farm, and its owners have been up tending to chores since about 5:30 a.m. Intense rising sunlight has started heating the earth, but signs of an overnight blessing of rain are still evident: wet grass, puddles along a rocky driveway, the Crystal River running thick with mud at the base of the property.

It’s a sight she’s seen all her life, here in this section of the valley between Carbondale and Redstone. Mollie grew up on this land, a red-dirt 100-acre parcel purchased by her grandparents in 1949. Steep hillsides rise above its lush pastures, the fertile ground that her family has called home for over 70 years now.

“When I was little I lived in the house down the hill, that my parents built in the ‘70s,” Mollie says, gesturing across the property as she effortlessly swings her 16-month-old son Tye into an infant carrier on her back. She then gazes around toward her own home, the property’s original farmhouse, where her grandparents once lived. “I could walk up the road here every day, whenever I wanted to see them.”

That farmhouse, built by homesteader James Dooley around 1900, now houses Mollie’s young family of five. (And her parents still live just down the way.) She and her husband Jake are ushering in a new era of regenerative farming on the land, all while raising their three young boys: Levi, Cole, and baby Tye. Mollie attended college and lived on the Front Range for several years, working as a clinical dietitian in healthcare before becoming disheartened by her experiences in the industry.

"It was frustrating to see so many people sick from preventable diseases," she says. "I realized I wanted to work on the prevention end of the spectrum by raising wholesome, nourishing food so that people don't end up in the hospital in the first place."

She and Jake, an electrician by trade who was raised in a New Mexico farming family, made the decision to return to the Crystal River Valley in 2016. They gave up their Front Range lives, moved into Mollie’s grandparents’ place, and launched their dream: Dooley Creek Farm.

“When James Dooley settled here over a century ago, he was probably raising cattle or potatoes, or possibly both,” Mollie says. “The property changed hands a few times in the early 1900s, before my grandparents bought it. We think someone grew berries here in those years, because we found a bunch of old berry crates and have talked to a few older folks who told us they remembered picking strawberries here when they were kids.”

Mollie says her grandparents kept some hobby animals over the years, but never used the property for a working farm. So although she and Jake are returning the land to its agricultural roots, they still feel as if they’re treading into somewhat new territory with their operation.

“We’re a ‘protein farm’ with cattle, pigs, meat chickens, and eggs. When you begin farming they usually tell you to pick one thing to start with and see how it goes, but we’re doing four,” Mollie laughs. “It’s been a lot to learn, and there’s always something that needs to be fixed or a problem to be solved. But we’ve been really encouraged by the positive response we’ve had from people here, who care about high-quality food and healthy land. That has helped keep us going.”

Despite the learning curve and a never-ending to-do list, Mollie and Jake’s passion for their work seems evergreen. They find purpose in nurturing their land, their animals, their children, and, in turn—their community.

“It’s an abundant life, but not a hurried one," Mollie reveals. "We have to work with the seasons and the animals' natural life cycles. You can't hurry things along; there's an ebb and flow."

The cycles of nature are palpable on any farm, but are especially so at Dooley Creek. Spring and summer are for work, and fall and winter are for rest and repair. There are the daily chore routines, the monthly animal processing, the seasonal churning of growth, harvest, and re-birth; but here, the Shipmans themselves add another powerful layer to the ageless rhythms of the land.

“We’re a family farm, and our kids are a part of everything we do here,” Mollie says as her two older sons reach into the farm’s brooder and cup fuzzy yellow chicks in their hands. “It’s really special to be able to raise them in the same place where I grew up. I homeschool them but they can walk down and see their grandparents any time, just like I used to do. Their grandma teaches them reading.”

From those young fourth-generation farm kids to the brawniest cattle out wandering the scrub oak, life—in all of its beautiful iterations—circles back upon itself continually in this well-kept corner of the Crystal River Valley.

“We feel so thankful,” Mollie says. “To help bring a greater symbiosis between the animals and land, and then share that with our family and other people, is fulfilling.”

Dooley Creek Farm shares are currently sold out, but you can make a reservation now for the 2022 Summer CSA (community-supported agriculture) season. Pay up front and receive twelve monthly boxes of meat delivered to your doorstep anywhere from Aspen to Rifle.

Visit DooleyCreekFarm.com to read about the Shipman family’s farming philosophy, regenerative practices, history, and CSA registration. Also find them on Facebook and Instagram at @dooley_creek_farm.