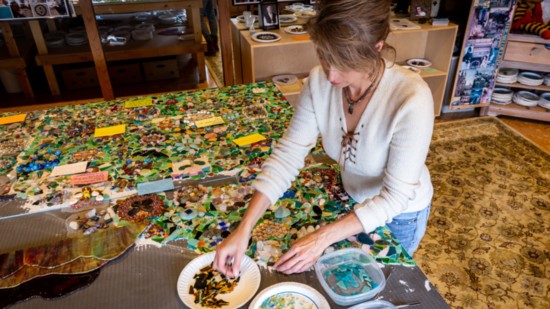 Giving An Angel Its Wings

The Angel of Hope Has Been Years in the Making. Now, Its Creator Needs the Community’s Support to See It Soar

After the tragic death in 2014 of her daughter Anna Wilson, artist Diane Orlov had a life-changing dream. In it, she was being led by an angel, who gave her hope and direction in the midst of despair and loneliness. This dream motivated her, and in the years since, Orlov has been working with hundreds of Roaring Fork Valley residents to manifest her dream angel into a tangible one. As a result, her Angel of Hope Mosaic Project was born.

“After Anna’s death,” explains Orlov, “ I could feel how isolating grief, loss, and trauma were, so I had to create connections around me. I want to do that with this angel and give people a more magical, joyful place to put their memories by creating an art piece that will someday inspire other families and communities.” She ultimately hopes it will serve as a beacon of light for others, who find themselves grappling with their own losses.

The first step in realizing Orlov’s dream was to work with children and adults from local schools, non-profit organizations, and interfaith congregations to create over 400 unique, meaningful mosaics that will eventually form the larger angel. This was important to Orlov because, in the words of project board member and friend Allyn Harvey, “She has overcome personal loss by reaching out to so many children and adults and asking them to think about the angels in their lives. Her story is one of hope.” Each artist has contributed to this story with their own designs, choosing from an assortment of semi-precious stones and adhering them onto squares of drywall mesh tape, which were placed in the middle of paper plates. Afterward, each participant wrote a sentence or two on a notecard, explaining the reasoning behind the work. Orlov has archived all of the individual mosaics in crates, where they’ve been awaiting their turns to be incorporated into the larger angel mosaic via careful finger grouting. When the 9'x13' work is completed, it will be a beautiful piece of community art erected atop a gentle slope between St. Stephen Catholic Church and St. Stephen Catholic School, located across the street from Valley View Hospital.

When Father Bert Chilson presented the project to parish and school leadership, he says the response was “universally positive and supportive.” Considering its proximity to the hospital, he also points out that “its location will hopefully draw the attention of those seeking consolation and peace in the midst of hurt and unknowing.” By visiting the Angel of Hope, which will be lit up at night, or spending time in solitude in the prayer garden surrounding it, a person will have a chance to reflect on the timeless truism that even out of brokenness, one can find beauty.

Three of the mosaics were created by siblings Emily, Anna, and Bridget Carrington, whose older brother Evan didn’t make it home to Glenwood Springs after his day trip to Denver on June 20, 2016—five days short of his 19th birthday. According to their mother Jane Carrington, “Having a memorial with tiles hand-made by Evan’s family brings us such joy; he is remembered not only in our hearts, where he will never be forgotten, but for all to see.” Once the angel is installed, Evan’s sisters will be able to visit it and point out their artistic contributions to friends and family, as well as read their statements in the project’s companion book—all of which will keep the memory of their brother alive.

The angel’s surrounding structure, designed by Basalt architect Michael Fuller, will break ground this summer; however, because the project has been privately funded so far, and is not a commissioned piece, it still needs a lot of financial support.

Board member Harvey explains that “the project has come very far on a very limited budget, and a lot of volunteer time from Diane. Now, we are in a phase where we need to raise real money to make it all happen. Ideally, we’ll raise about $150,000 to pay for the skilled artisanship needed to put all the pieces together, and for the labor and materials needed to build the site.”

For anyone interested in making sure that this dream comes true, there are a couple options. First, a check (with Compassion Aspen/Angel of Hope in the memo) can be dropped off at any Alpine Bank location. Otherwise, it’s possible to find out more either by liking the project on Facebook (Angel of Hope – Roaring Fork Valley) or by visiting AngelOfHopeMosaicProject.com. Orlov also welcomes anyone who’d like to see the angel’s progress to schedule a tour of her Third Street Center studio in Carbondale. She can be reached via email at fauxdeco@yahoo.com. Ideally, the project will convey Orlov’s personal motto that, “No one should have to fight their battles alone.”