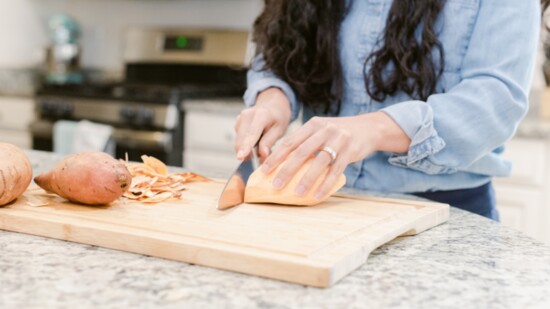 How a Plant-Based Diet can Change your Life

Ten years ago, Christina and I were living in Richmond, VA, completing the first year of a graduate program designed to further our medical training.  We graduated from the College of William and Mary the year before, and, with highlighters ready, were eager to start a fresh academic year in a new and bustling city.

It only took us two weeks to realize something wasn’t quite right.

When we first met, Christina and I kept a regular exercise routine, and with it came what felt like boundless energy.  Eventually, without the steady cadence of the Williamsburg Running Club, we felt the insidious creep of one bad habit, then another, crawling into our lives.  We stopped exercising as much as we used to.  We felt sluggish throughout the day.  We weren’t waking up refreshed.  We were irritable and stressed.

Over the next few weeks, it didn’t help that the academic pressure cooker turned full dial, with no apparent release valve in sight.  We knew our current path was unsustainable and began to worry about how we would strike a healthy balance in our lives.

By random luck one Saturday afternoon, Christina was perusing a food blog, and stumbled upon something called a “plant-based diet.”  I heard the phrase vaguely thrown around at dinner parties, along with terms like “lacto-ovo vegetarian” and “pescatarian.”  Peering over her shoulder to the monitor, I raised a reluctant eyebrow, then shuddered.  I had been raised on eggs and milk, and I certainly wasn’t too keen on the idea of giving up burgers.  I had associated a plant-based diet—or anything vegan- or vegetarian-related—with ascetic monks and solemn vows of deprivation.  No meat?  No dairy?  What would breakfast even look like?

But I also knew that things needed to change.  We had just discovered greasy cart food on the busy Richmond downtown streets, and so I knew the afternoon slump was real.  I had gained a few pounds, and didn’t feel my best.

Christina had already been reading about cleaner eating over the past year, but I had remained unconvinced.  Slowly, as Christina clicked through page after page, the evidence for this new way of eating began to mount.  After hearing one particularly-moving TED talk from a physician with Multiple Sclerosis whose symptoms settled into remission with cleaner eating, my defenses softened.  Chronic disease is strong in both of our families, and we wanted to do whatever we could to stay healthy.

Over the next week, we scoured vegan blogs for interesting recipes.  List in hand,  we walked to the local grocery store just a few blocks west of our apartment.

We shopped around the perimeter of the store for fresh herbs, fruits, and vegetables, before aiming our sights at the bulk aisle.  The blogs we read extolled the virtues of the bulk section: all the benefits of great shelf life, without the extra preservatives.  With a full cart, we made our way back home.

Our apartment was about 400-square feet.  With space at a premium, we were extremely creative with our storage.

To start, we fashioned a svalbo side table from IKEA into a makeshift kitchen island.  In the open shelving below, we stored colorful arrangements of bulk goods into large glass containers.

We knew from experience that healthy food, once home, needs to be visible.  Half-ignored bags of what-type-of-bean-was-that stuffed into the back of our closet over the years taught us that, if it isn’t easy to see—and easy to reach—it doesn’t get eaten.

To that end, I went to the local hardware store, the manager eyeing me suspiciously as I moved a cart full of clinking mason jars to the checkout line.

“No need to make your own, son,” the grey-bearded checkout clerk drawled.  “I can tell you where to get the best moonshine.”

I think he had the wrong idea.

We knew that if we stood a chance of adhering to something entirely new, we needed to streamline our preparation.  We bought a $40 miniature Bullet blender from Ninja, pulled out the Crock-Pot, and started building a routine.

Every morning, breakfast was the same smoothie: mixed berries, spinach, almond milk, and cinnamon.  We added a little homemade granola on top for an extra crunch, if needed.  It had some sweetness but nowhere near the sugar content I was used to with store-bought cereals.

Lunch was quinoa bowls from the Crock-Pot, with a cornucopia of kale, mushrooms, and beans, topped with avocado.  Dinner was an enormous salad.  I was stuffed.

Like a grocery store, our fridge and pantry had designated places for all of our ingredients.  We would make meals on Wednesdays and Sundays, prepackaged into Tupperware containers that could slide into our lunch bags on the morning dash out the door.

Within a week, we had a little more energy.  With healthier foods came better moods, and without all the heavy carbs and meat for lunch, we evaded the afternoon energy slump.

After two weeks, we felt like different people. All of the extra energy gave us the added drive to exercise regularly again.  The benefits even bled over to our studying: the hours hadn’t changed, but the quality of our learning improved.

Once we had the basics down, we began to try more creative recipes: a surprisingly good vegan burger, a delicious seven-layer dip, and a gorgeous pan of roasted rainbow carrots with tahini sauce.  Who would have thought carrots could be so appealing?

By three weeks, meals that tasted sweet or satisfying before were now too overpowering.  We became acutely aware of how each food made us feel.  Following that “gut feeling,” so to speak, was the one habit that improved all other habits.  It gave us the chance to think twice about our selections.

When we finally completed our year in Richmond, we look back at it as one of the most formative of our adult lives.  It was a laboratory for building better habits, where we could see for ourselves the impact that a new lifestyle could have.  The lessons learned there became the foundation for how we would approach our health over the next decade.

Of course, we weren’t (and still aren’t) perfect.  Going out with friends, we occasionally derail.  But the point was never perfection; it was about improving the daily average of how we feel.

As doctors, Christina and I now use this approach when we talk about staying healthy.  It’s not just about handing out a pill for this disease or that.  It’s so much more than just prescribing “diet and exercise” without further explanation.  Instead, it’s about seeing what someone’s life looks like, then tailoring advice to their specific needs.  Everyone is different, and there is certainly no single road to health.  But when it comes to feeling your best, cleaner eating just might be the simplest common path.