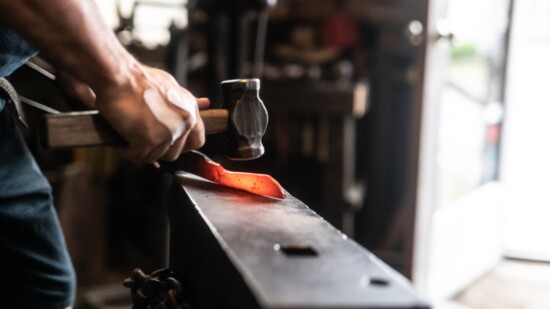 Cowboy Szymanski thrusts a molten hunk of metal into his coal-burning forge and waits for the iron to melt. To call it a knife blade would be premature at this point. There’s still the hammering, hours of grinding and heat treatments before Cowboy’s metal starts to resemble the artful custom blades he’s renowned for crafting. But how a thing begins around here is certainly never how it ends.

From the forge, Cowboy extracts his iron that’s now heated to 3,300 degrees. It’s like clay. A malleable and glowing beam which he sets down on his anvil. A few taps from his hammer sends embers flying. Cowboy flips the metal, strikes, turns then strikes again. Twist. Turn. Hammer. The iron quickly takes shape as its fiery color fades to a dull red. Time to go back into the forge. Bladesmithing is a whole body experience for Cowboy, a master knife maker and owner of Phenix Knives in Bellville. He listens for clang of hammer against iron, smells it smoldering and watches its color change.

“I'm crafting just like when you were a kid and you played with clay,” he says. “I'm now sculpting metal and crafting it into something new, creating something functional. A visual functional piece of art.”

A BLACKSMITH IN THE MAKING

Cowboy began his foray into bladesmithing 28 years ago when a chance encounter landed him an impromptu apprenticeship. He worked at a bike shop at the time after competing professionally in extreme sports like mountain biking and rollerblading. Thrilling as it was, sports were never Cowboy’s true passion. He grew up enamored with swashbuckling tales of King Arthur and the Three Musketeers. He also had a penchant for lighting things on fire. So one day when a bike shop customer asked him what he really wanted to do with his life, Cowboy blurted out, “I want to make knives!”

The customer told Cowboy of a blacksmith named Lee, a bear of a man who worked out of a dilapidated gun range at the end of a dirt road. When Cowboy arrived to look for Lee, he arrived at a smoky office filled with guns, knives and Lee, who ran Bear Claw Knives. Lee taught Cowboy everything he needed to know and after three days of training, Cowboy had made two knives and began purchasing his own tools. Now, 25 years later, Cowboy is still forging and teaching others how to do the same. In his workshop–birthed from a blacksmith shop that’s operated almost continuously since 1891–he hosts classes and forges custom knives for his own extensive list of clients. Customers who place a custom order today can expect to receive a knife around December 2023. Equally as popular are his in-person classes where students can learn how to fashion their own knife from a horseshoe or spend days in the shop working one-on-one to create a custom masterpiece. For Cowboy, it’s allowing others to forge a memory that keeps him going.

“It's the magic of the people more than anything else,” he says.

Cowboy forges knives that are as much statement pieces as they are functional. In his shop display case is a gentleman’s bowie–a five-inch blade polished so fine you can see your own reflection in it with a mirror-like appearance–as well as something called a knork, a sleek, fork-like knife utensil that Cowboy makes for people who need help cutting and eating food such as people who’ve had strokes or injured veterans.

Over the years, Cowboy’s acclaim has grown and with good reason. He is friendly, hardworking and meticulous about his craft. A captivating storyteller, Cowboy is as quick to give a lesson about the history of blacksmithing as he is to explain–with passionate accuracy–the science of his work. For years, he performed living history interpretations at George Ranch and did stints at the Renaissance festival. Then in 2015, Cowboy appeared on Forged in Fire, the History Channel’s reality knife-making competition show. Cowboy competed on the show’s first season after turning down producers multiple times. Although he did not win, he learned a great deal more about bladesmithing and continues to meet with Texas-based show alumni every year.

“I started seeing the quality and caliber of the guys who are out there, and I'm like, yeah, I'm a baby in this group,” he says. “I started realizing I needed to push myself.”

These days, Cowboy splits his time between forging custom orders, teaching and planning his yearly knife-making event called Texas Select. The event, the largest organized gathering of custom knife makers in Texas, draws bladesmiths and knife enthusiasts to Bellville for demonstrations and fellowship. The show also raises thousands of dollars to fund local education programs. Still, he longs for less busy days so he can challenge himself to keep improving.

“You gotta go through the tough stuff,” Cowboy says. “That’s what makes you better.”