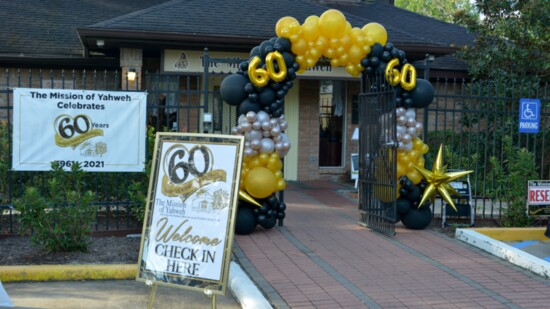 Sister Helen Gay and the Mission of Yahweh

Photography by David Postma and Provided

Sixty years ago a hairdresser named Helen Gay quit her fancy salon job, loaded up her little green pickup and took to the streets of Houston’s notorious Fifth Ward. She was a college graduate, former schoolteacher, and lived in a cozy brick home when she heard the voice of God directing her to do something drastic.

Her mission? Bring food, clothing and a message of hope to the poverty-stricken lives of those around her. For years, she befriended abused women in desperate situations along with motherless children who had no place to call home. With unshakeable faith and acting on directions straight from the divine, Sister Gay, as she came to be known, founded The Mission of Yahweh. The faith-based home is a refuge for women and children in crisis.

“It is not a shelter,” she said in a previously-recorded video interview. “It is Jesus’s home away from home for his least people.”

Sister Gay began her work serving meals, clothing and an endless supply of cheerful “God Bless You’s” to drug addicts and displaced women. Some people ate then left and others slept in her two-bedroom home. Soon, she began adopting children whose mothers were unwilling or unable to care for them. One child was even gifted to Sister Helen by a mother who’d just given birth at a nearby hospital. In all, Sister Gay, and her husband Fisher Gay, legally adopted 24 children and raised them alongside the mission residents.

“It was just all about love,” says Helen Gay, Sister Gay’s daughter and namesake. “It was pure love.”

Helen recalls growing up in a “melting pot” of personalities with children of all ages. Sister Gay kept track of their birthdays, their personal stories and school activities. Prayer meetings were a regular occurrence in Sister Gay’s bedroom—dubbed Grand Central Station because of so many children coming and going. The children also attended regular church services, but above all, they were taught to love each other.

“Her speech, her actions, it was all in love,” says Helen, recalling lessons from her mother. “If you do anything, give love. Everything else will come.”

A PLACE OF HOPE AND HEALING

Sister Gay passed away in 2008, but her legacy continues. Today, The Mission of Yahweh is now a tranquil campus in Carverdale, an industrial Northwest Houston neighborhood dotted with warehouses and used car lots.

In the beginning, Sister Gay would do anything she could to supply the needs of her growing mission. She gleaned clothes from the garbage for the women and children she cared for. She knocked on the doors of strangers asking for donations, food or money. Some people called her crazy, but Sister Gay knew she was about the Lord's work. Over the years her efforts drew the attention of wealthy donors who funded the construction of the mission’s twelve buildings. Today, the mission is supported by dozens of local churches, foundations and hundreds of volunteers. Sister Gay never accepted government funding, and the mission remains a completely privately-funded, Christian non-profit organization.

The campus began as a couple of simple "shacks" to house the poor, but today it's a far cry from that. The modern Mission of Yahweh consists of residential dormitories, a kitchen, a learning center, administrative offices and a chapel. A garden, two playgrounds and a grassy courtyard offer plenty of space for children to enjoy the outdoors. Across the street is a resale shop—completely staffed by the residents—where women can pick out new outfits for an upcoming job interview or receive school clothing for their children.

At full capacity, the mission houses more than 120 women and children a month. Residents can stay as long as they need, but the average stay is four to six months. The mission also serves more than 4,000 monthly meals to its residents and those in the community.

HEALING THE MIND, BODY AND SPIRIT

The Mission of Yahweh is more than a homeless shelter. It’s a place of miracles. Stories of massive personal transformations abound. Donations often show up just in time to feed or clothe residents. Relationships between mothers and daughters are mended. People learn to forgive the traumas of their past. One resident was even cured of stage four breast cancer.

“At the mission, I have purpose and hope,” says Vivienne Roberts, a former resident who underwent cancer treatments during her stay. The staff shuttled her to doctor’s appointments and cared for her after her radiation treatment. The mission children even made her get-well cards. Soon after group prayers, and treatments, Vivienne was cancer-free.

At Yahweh, residents receive everything they need to get their lives back on track. They can eat a fresh meal at the campus dining hall, sleep in their own bedroom or alongside their children’s bunk beds. They learn how to budget their income, how to interview for a job or how to become better mothers. Everyone is expected to attend Bible study and chapel. Most women come to the mission without a job but often leave employed, with new job skills and a renewed sense of possibility.

“I came here not knowing what was ahead,” says former resident, Champernell Washington. “I just knew that I was tired. After coming here, I was able to take a break from some of the things that were wearing me down.”

Champernell arrived at the mission years ago with her three children after a series of bad decisions and drug abuse. She had no place to live and was mentally, spiritually and physically exhausted, weighing only about 90 pounds. The mission was the last place she wanted to go, but when she met Sister Gay, all of that changed.

“Mother Gay, she welcomed everybody,” Champernell said. “She loved everybody’s children. There were times she would just hug me and say, ‘Daughter, just take it to God.’”

Now, 60 years after Sister Gay began trucking supplies to hopeless souls in Fifth Ward, the mission she founded celebrates her work. In October, the mission held a 60-year anniversary party complete with a proclamation from Congresswoman Sheila Jackson Lee designating Oct. 9 as Mission of Yahweh Day. Dozens of Sister Gay’s children and grandchildren posed for pictures and former residents returned to walk the mission halls. A bronze statue sculpted by local artist Shirley Scarpetta was unveiled portraying Sister Gay adorned in her iconic white garment and clutching her large-print Bible. The statue now welcomes mission visitors at the front door of its administrative offices.

Big things are on the horizon for the mission. The staff is gearing up fundraising efforts for a new dormitory to house 50 more residents. The new project is expected to cost about $2.5 million. They are also planning the annual Christmas on a Mission event complete with a toy giveaway and real snow for the resident children.

Much has changed for The Mission of Yahweh in 60 years, but the one constant has been its unwavering focus on God. The team regularly prays together over their work and prays blessings over each resident’s life. Their hope is to help restore their residents to become self-sufficient, productive members of society.

“The poor will always be among us,” says Tammie Jeffers, Mission of Yahweh’s development director. “But they don’t have to stay that way.”

“Her speech, her actions, it was all in love. If you do anything, give love. Everything else will come.”

The mission has ongoing needs for the following items

Healing the body, mind and soul

Mission residents not only receive immediate food and shelter, they get training and spiritual counseling to help them end the cycle of poverty. The goal is to empower women and restore their lives to be fully contributing members of society.

At the mission, children have a safe place to live and a full spectrum of supporting services. The campus has playgrounds, on-site daycare, vacation Bible school and afterschool programs to enrich children’s lives during their stay.

The mission distributes food for Christmas dinner and gives toys to the children of low-income families in the area. Mission children can also enjoy a special Christmas event complete with real snow and toy giveaways.