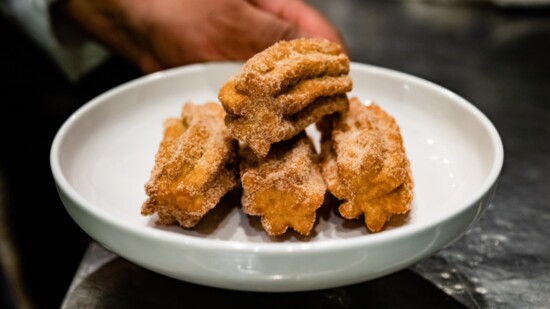 Famed veteran restaurant Eight Row Flint continues its dedication to authentic flavors with its house-made masa and corn tortillas. What started as a robust menu of cocktails and only five tacos in 2015 has now expanded to over 30 menu items - all made in the restaurant’s food truck. Although all of the menu items are delicious, the tacos stand out because of the research and recipe development that went into them from the culinary director and co-owner, Vincent Huynh. The masa is made from scratch daily, starting as dry corn before going through boiling, soaking, and milling. Cinco de Mayo is the ideal time to try out their best-selling Brussels Sprouts tacos, but don’t miss out on the ultra-tender Beef Barbacoa or Pork tacos. agricolehospitality.com/eight-row-flint

Recently opened in the former Dunlavy space, the small towns of Mexico inspire Flora’s cuisine, which features a mix of many regions and just the right amount of Texas influence. Guests can count on flavorful made-from-scratch food such as street tacos, tostadas, meats, ceviches, oysters, and more. Pictured: Flora’s churros - house-made and rolled in Mexican cinnamon, served with cajeta and house-made vanilla ice cream. florahouston.com

Hugo Ortega’s URBE in Uptown Park celebrates Cinco de Mayo with a lineup of all-day festivities. The restaurant will be open for lunch, serving its menu of Mexican street food favorites, beer, wine, and cocktails. There will be daily specials on food and drink, including The Greatest Margarita Ever Sold and the Urbe RIta (pictured). They will be hosting a party at night: One Night in Jalisco, a ticketed, stand-up event with interactive food and drink stations showcasing El Tesoro Tequila and passed bites. URBEHouston.com