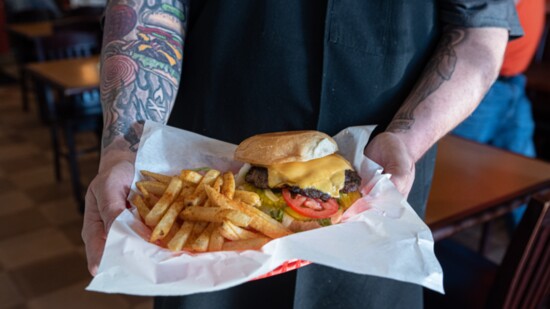 Small Kitchen with a Big Heart

Andy Correra’s roots run deep in Cypress. He was born here, raised here, played high school football for the Langham Creek Lobos, and worked in the school district for more than 20 years. Now, he’s the namesake behind Andy’s Kitchen, a friendly little neighborhood burger shop in Fairfield. With less than three years in business, the eatery is known just as much for its flame-grilled burgers as its namesake, Andy. It’s a place he likes to call a “small kitchen with a big heart.”

“We want the quality to always be consistent,” Andy says. “The only way you can do that is if you actually put your heart into it.”

Andy’s Kitchen is the culinary headquarters for Andy’s eatery and his popular service, We Wagon Catering. Sitting at one of his tables, Andy tells about how his burgers came to be so loved. It all started with Andy trying to create something different from other burger joints. His patties are made with his personal seasoning -- a blend of brown sugar, garlic and citrus peels. Each patty is a hearty nine-ounce serving that’s hand-pressed, cooked until moist on the grill and tossed onto the open flame for a fiery finish. It’s brushed with a glaze to seal together the flavors. Finally, it’s gently set between his personally-selected sweet sourdough buns that are baked fresh on the grill every day. The result is a burly, flavor-packed burger that takes two hands to eat and leaves your fingers dripping with grease.

“It should be where you gotta wipe your hands after you take a few bites, because you got the juices coming out,” Andy says. “You want the flavors to be an explosion in your mouth.”

Andy’s burger menu is filled with creative ensembles that give diners a taste of his personality. There’s the Cowboy Burger, topped with smoked sausage, onions and pickles, or the Hot Stuff Burger, loaded with grilled jalapenos and onions. All burgers come with fries or, for a small upcharge, an order of fresh-made onion rings which are dipped in a buttermilk batter and fried until golden. Andy’s menu also carries an ample selection of Philly cheesesteak sandwiches, chicken strip baskets, salads and barbecue. But it’s his burgers and personal service that regular customers have come to love.

“If you’ve never had his hamburger, you don’t know what you’re missing,” says Kat Roy, a Fairfield resident who loves to order Andy’s cheeseburger with grilled onions. Andy’s food tastes homecooked and he always goes “over the top” with his food service, she says.

“They’re just very genuine, very humble people,” Kat says. “It shows in their food, it shows in the restaurant and how they treat you.”

The son of Uruguayan immigrants, food and hard work was always at the center of Andy’s life. As a teenager, he got his first taste of the food industry working in his dad’s restaurant. The month after Andy graduated from Langham Creek High School, he took a job as a school custodian. He worked his way up to a top management position, overseeing the district’s entire custodial department, all while running a catering business and his own pizza shop on the side. Eventually, Andy sold his pizza business and started a food truck, which he still uses today. After 26 years in the school district, he retired to focus on his passion and managed multiple restaurants. Then, in 2018, he finally opened his own diner.

“When I opened it up I said, ‘You know what? I’m going to be on a mission to do the best burger I can possibly do,’” he says.

But it’s Andy’s love for the community that makes him adored by his customers. He’s gregarious, giving and always smiling. Awards recognizing him for food drives, charity cookoffs, donated luncheons for veterans and school functions fill the diner walls.

“Andy is constantly giving,” says Billy Cable, a longtime customer. “He’s always looking for the next thing to do or people to give to.”

"I’m going to be on a mission to do the best burger I can possibly do."