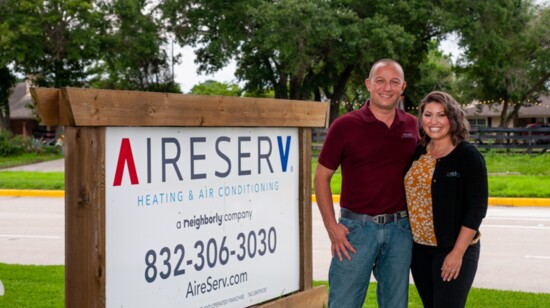 Cypress Couples Who Work & Play Together

Miles away from anybody, Kristin Severson sat in the darkness on a mountainside in Colorado. She’d just taken down her first elk, but without help to carry it away, she was stuck. Earlier that day, she and her husband, Joe Severson, spotted a black bear just yards away from her location, and the thought of it returning was very real. Years ago, this all would have terrified Kristin, but since meeting Joe, hunting in the deep wilderness became less of a terror and more of a thrill.

“I just got stronger and braver,” Kristin says.

Three hours after her kill, Joe and a wilderness guide arrived to move the elk. It’s now mounted in their home. The bear never returned.

“It’s an adventure every single time,” Joe says. “It’s both an individual challenge, and a challenge we share. It’s just something we fell in love with and we thrive on now.”

When they’re not out hunting big game, Joe and Kristin are busy running Aire Serv of Houston Northwest and Katy, a thriving heating and air-conditioning company. Kristin handles customer service while Joe does unit repairs, replacements and maintenance. The two met while working at an AC company in San Antonio. In 2009 they launched their own business, married in 2011 and in 2016 bought into the Aire Serv franchise. They pride themselves on being honest with customers and doing high-quality work.

Over the years, the couple built their business and marriage around service. They’ve dominated barbecue cookoffs, with Kristin’s barbecue chicken beating out hundreds of teams. Then, in 2017 when Hurricane Harvey struck, the couple fired up the competition grill and cooked roughly 4,000 meals for first responders and volunteers.

“I fixed peoples’ air conditioners for free all weekend and Kristin and the employees kept the pit hot,” Joe says. “Service is kind of our love language to the community and to each other.”

While Aire Serv keeps them busy, the Seversons manage yearly hunting trips in the remote wilderness. They just purchased property in Colorado with the ultimate goal of becoming wilderness guides. For them, life’s about experiences rather than owning things.

“We didn’t have anything really handed to us,” Kristin says. “It makes us want to work hard and play hard.”