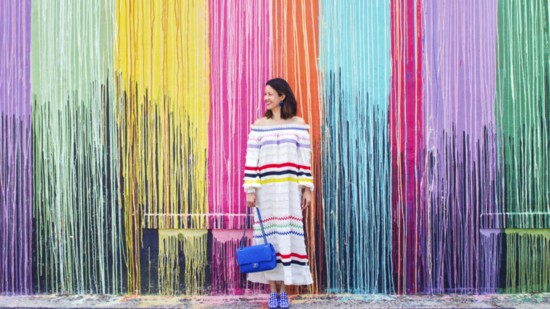 Curate Capital, Investing in the Future of Female Entrepreneurs

Inside Carrie Colbert's mission to funnel investment dollars into businesses owned by women.

As a nearly twenty-year veteran of the oil and gas business, Carrie Colbert found herself in a unique position to pivot and change the direction of her career path altogether. Corporate life burnout left her wanting to explore her creative side and the burgeoning business of social media.

Unattached and childless at the time, Colbert settled into chronicling her travels and high-end fashion on her blog and social media, but always knew that wasn’t her end game. “When I started out blogging, my goal was never to be the traditional blogger or influencer. It was more from a business perspective – I wanted to learn about this new online economy and how people were making money aided by social media,” said the entrepreneur. “My perspective was to learn the landscape.”

Colbert quickly made a name for herself in the digital space where her colorful photos and blog posts embodied her slogan, “More color, please.” Soon she was connecting with other creatives online and speaking at conferences geared toward creative businesswomen and entrepreneurs. It seemed quite naturally, and without meaning to, Colbert had stumbled upon her new career path.

Armed with an entrepreneurial spirit, an engineering degree, and MBA from the University of Texas, Colbert realized she had the distinct ability to help other business women. Her online connections began to turn into professional partnerships, where Colbert was able to add value with her unique hybrid of expertise.

“I started connecting with women who had great creative ideas, but didn’t have the background in finance or business that I have,” says Colbert. “I’ve always been passionate about female-founded businesses, so at that point, along with running my blog, I started investing in them.”

Although 50% of businesses vying for venture capital dollars are female-founded, less than 3% receive funding. By any standards, this is an abysmal number, so when word got out that Colbert was working to change that with her investments, the deals began to roll in. Opportunities soon exceeded Colbert’s personal capacity to handle them. Ever the entrepreneur, Colbert founded Curate Capital, a venture capital fund whose sole mission is to invest in female-founded businesses that cater to other females.

“We have been able to work with such great women – we are talking about Forbes 30 Under 30 caliber of women,” says Colbert. “They are out there doing great things to change the landscape of the businesses they are in. It is an exciting time to be in that space as a creative person and investor.”

Colbert, now a mom to three-year-old Elle, still runs her blog as a creative outlet and a way to connect with others in an online space, but it is quite evident even after talking with her briefly that her new passion is Curate Capital. Her first and most substantial investment, a party decorations business, Packed Party, recently announced their partnership with Walmart – notably the first-ever non-celebrity partnership for the big box store.

“Walmart approached us with the deal,” says Colbert. “But it never would have happened if I hadn’t met Jordan Jones (the founder of Packed Party) on Instagram.”

I am not in this female founded space because it is politically correct or trendy right now. I am in this space because I really believe in helping other business women. - Carrie Colbert