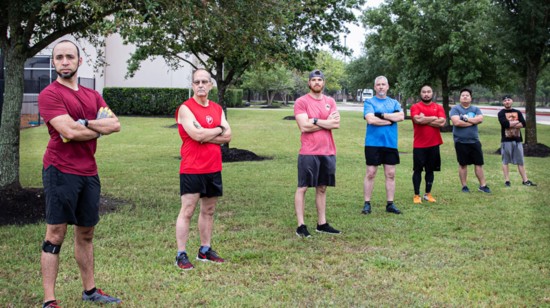 Last year, Kevin Hoover, a 33-year veteran law officer, discovered his years of policing the community had led him to gain some extra weight. The patrolling, the report writing and repetitive sedentary tasks as a Harris County deputy and later a constable created a ripe environment for the weight to slowly creep and cling to his body.

Kevin had always worked out, but nothing was quite as exciting as when he was invited to an all-male, military-style workout group. It was downright addicting.

“It’s being around your friends. Everybody is so friendly,” Kevin said. “You see them sweating and you’re sweating. You’re all in for the same purpose, for health.”

“I pretty much retired so I would never miss again,” he jokes.

Since retirement, Kevin’s lost 35 pounds. He now works out four days a week and even leads classes for the fitness group called F3, which he found so addicting.

The name F3 stands for the group’s core values: fitness, fellowship and faith. The group is made up of thousands of men across the country who gather for free community workouts, guys-only social events and spiritual support. Each workout features bodyweight movements like burpees, push-ups and jumping jacks with occasional runs or long hikes sprinkled in. Workouts are tough but doable. Men often joke but encourage each other to finish. A few get competitive. Others struggle to finish at their own pace.

“My first week it was very difficult because almost every day toward the end I felt like I was about to puke or throw up,” says 30-year-old Kevin Sutanto who joined F3 last year. “As you keep going it’s definitely easier.”

Everyone receives nicknames when they join which reveals a personal detail or inside joke about their lives. Kevin Sutanto earned the nickname Gladiator after he serendipitously joined an F3 workout when no one showed up for his scheduled Camp Gladiator boot camp. Names also build a sense of community and connection. The group is open to men of all fitness levels and all ages.

“The fellowship aspect is huge,” says Paul Valdez, a co-leader of the Cypress F3 chapter, The Crux. “You very well might meet a guy or two that you never knew may be a really good friend to you.”

Paul, a married father of two kids both under five years old, joined the group after realizing his social life was sorely lacking. Most married men end up focusing on their careers and families so much that they forget their own social lives, he says. F3 offers a way for men to get fit and connect with other men at the same time. Outside of workouts members will meet up for scheduled happy hours, coffee meets or Bible studies. The goal is to develop members to be leaders both in fitness and in life.

“If you have never worked out in your life you can come and join up,” he says. “We never leave a man behind. You always take care of all your F3 brothers.”