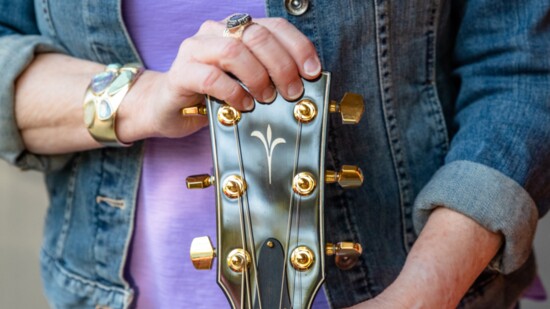 Kris Rogge Fisher always has a song running through her mind.

“Sometimes I dream lyrics and melodies; or they pop in my head while I’m in the shower! They are like fireflies. You have to capture them, or they will disappear,” said Fisher.

Music has always been a part of her life. From the time she was in her teens, she’s played in bands and sang in the church choir. Although music was her first love and singing to her was “just like breathing,” once she was in her 20s, she decided it wasn’t the right time to chase her dreams.

“There really wasn’t a way to concentrate on a singing career with two children,” said Fisher.

So, what career does an artistic type with an aptitude for music pursue?

“Banking,” laughed Fisher. “I didn’t pick banking, though. It picked me. And, I do believe God had a hand in it. It gave me a stable way to support my children and put me in a position to help all the customers I’ve had over the years. In addition, some of my dearest friends resulted from our paths crossing at various banks where we worked along the way.”

While spending 40 hours a week as a commercial lender, Fisher always tried to sneak in “music time” wherever and whenever she could – church, karaoke, and private events.

Then, about 20 years ago, she decided to try her hand at songwriting.

“I had no clue how difficult songwriting really was,” she said. “But I loved it, so I kept doing it. Then, about 10 years ago, I decided to join the Houston chapter of Nashville Songwriters Association International. I’m so glad I went – it was life changing.”

Ever since that first meeting, she has been writing every chance she gets.

“That includes lunch breaks, in the car (singing into the phone), and scribbling down ideas in a doctor’s waiting room,” she laughed.

Her dedication has paid off in more ways than one. In 2019, Darrin Morris Band recorded a song she wrote with a good friend called “Never Knew Texas,” and it landed in the No. 11 spot of the Texas Country Music Spotify chart.

“It was the first song we wrote together. God was definitely in charge that day! The odds of that happening for anyone are immeasurable,” added Fisher.

Then, in 2020, Fisher was named among the Top 10 songwriters in Texas at the 2020 Texas Country Music Awards for a song she wrote called “You Shouldn’t Be Here.”

“It was such an honor to be recognized among so many talented songwriters. The awards ceremony was so much fun, and the talent in Texas country is amazing,” she said.

Fisher has also landed two single-song publishing deals in Nashville, and the first half of 2021 has been a promising sign of great things to come. She has had cuts by three different Texas artists – one is Morgan Ashley and her song, “Back to Austin,” is currently climbing the Texas music charts.

As she celebrates another successful single, she is also commemorating the ending of a chapter – or should we say “verse?”

After 47 years, Fisher recently retired from banking. She is looking forward to having more time with her husband, two daughters and six grandchildren, but has no plans to stop working. She encourages others not to fall for the myth that you are too old to do what you love.

“I love the music business, but if I had believed the storyline that it’s a young person’s game, I probably would have given up. The truth is – there are people of all ages still performing, producing, writing, and doing whatever they like regardless of their years,” said Fisher. “My advice to others is to live your passion, nurture the seeds God gave you, and the rest will take care of itself.”