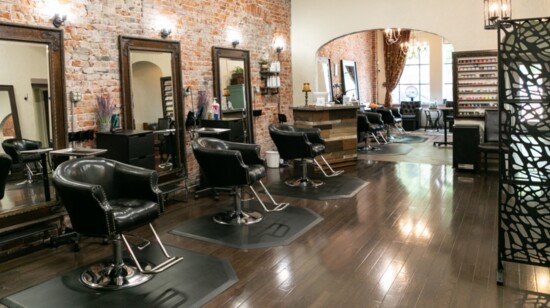 Let Your Hair Down

Salon Halo answers any question you might have about hair extensions

Last year, my sister saved for weeks for hair extensions. She made the appointment to get them and was obsessed with the look — she’s always had pretty hair, but with her extensions, she had the best braids and her hair was so thick and luscious. Then, the pandemic hit, and everything locked down.

“Well, I guess I’ll just have really cute hair on my couch, then,” I remember her saying.

But even if no one else could see them, she loved her long hair. I’d never considered hair extensions, but after my sister had them installed, I had so many questions (especially now that they would be seen by more than my couch!). So when I got the chance to talk to Tiffany Ponick, owner of Salon Halo and co-owner of KC Hair Halo Extensions, I was so excited to talk to a professional about all the things that go into hair extensions, and all the misconceptions that come along with them.

Tiffany’s salon, Salon Halo, is a large salon with 14 chairs in the adorable Columbus Park neighborhood. She has 11 stylists, all of whom are trained and specialize in hair extensions, though the salon offers all salon services, such as cuts, color, and waxing. The only method the salon uses to install hair extensions is hand-tied wefts, which she says is the superior way.

“There’s no glue or keratin,” says Tiffany. “They’re the least damaging hair extensions you can have. The way we position them and the way they lay, you can wear a lot of different hairstyles. They lay very flat.”

Unlike with other methods, you can wear your hair up in a high ponytail or many other hairstyles, and it’s nearly impossible to tell that it’s not a person’s natural hair. The hand-tied wefts also won’t damage your hair like with taped or microbead extensions since they don’t use an adhesive, which will break the hair over time.

An initial installation, which includes materials, will cost anywhere from $1200-$1900 and the appointment lasts about 3.5-4 hours. Follow-up appointments take about 2.5 hours and cost between $350-$600. Salon Halo uses Remy hair, which is considered the finest quality, as the cuticles are kept intact. It will last from 6 months to a year, depending on how it’s cared for.

When I asked if there was anything someone shouldn’t do with their hair extensions, she said not to get them wet in a swimming pool and not to use shampoos that contain sulfates —  though she said both of those things are damaging to any hair, not just extensions. She said hair extensions can also dry out easily since they aren’t getting natural oils from the scalp, so using a hair oil for moisture is very important, and also daily brushing.

Tiffany wanted to emphasize that hair extensions weren’t just for length. She said some clients get extensions to match their natural hair length — perhaps for someone who has thinning hair from sickness or postpartum hair loss.

“These extensions aren’t just for someone who wants hair to their waist,” she says. “We have several clients that wear their hair to their shoulders, maybe a little less, so we can customize everything to what the client is looking for, whether that’s length or volume.”