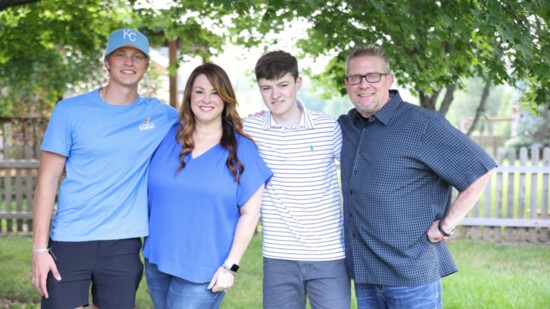 Dr. Clifford Stock embodies the spirit of perseverance and realizing your career dreams.

AFTER ENDURING A LIVER DISEASE DIAGNOSIS, A LIVER TRANSPLANT AND HERNIA SURGERY, “DOC STOCK,” THE NAMESAKE OF DOC STOCK’S SUMMIT EYE CARE IN LEE’S SUMMIT, RECOVERED AND WORKED TO REALIZE HIS DREAM OF BUSINESS OWNERSHIP.

Opened in February 2021, Dr. Clifford Stock and his wife, Meshelle, run the practice out of EyeMart Express, 1041 NE Sam Walton Lane in front of the north WalMart on 291 Highway.

The road from Fort Osage High School to the University of Missouri-Columbia and Optometry School was sometimes bumpy, however, he cannot imagine doing anything else but living his career dream of helping others see better.

“It’s crazy to say, but I knew in seventh grade I was going to become a doctor,” Dr. Stock recalled. “I had a biology teacher at Fort Osage that helped form my drive.”

Dr. Stock grew up in Buckner, Missouri, often helping his dad on their family farm.  After graduating from Fort Osage High School, he attended the University of Missouri and received a bachelor’s degree in Biology.  From there, he went straight to the Illinois College of Optometry and completed his doctorate in 1992.  He achieved the goal he set for himself to become a doctor by the age of 25.

“Basically, I got home from Chicago one day, had an interview the next day, and started work within 24 hours,” he said. Dr. Stock started practicing at a local retail optical chain. When his father was diagnosed with cancer in 1997, he moved to Lee’s Summit and began a full-time position at a WalMart in Warrensburg, where he stayed and worked every day for 19 years.

He moved, married Meshelle in 1999 and they had two sons. And all the while, Doc Stock was making sure he was at work every day.

“I was the ‘Cal Ripken of Optometry,’” Dr. Stock said, referencing Major League baseball great Cal Ripken, Jr., otherwise known as the “Ironman” for playing in more than 2,100 consecutive games. From 1992 until the day he was diagnosed with liver disease, Dr. Stock never missed a day of work. After his diagnosis, he missed just four days.

“They got my meds and my fluid under control,” he said. Dr. Stock’s liver issues were hereditary, but he wasn’t going to let it take down his career. CONTINUED  >

In the fall of 2019, he got the call he was waiting on - a liver transplant. As he recovered from surgeries in 2020, COVID-19 and lockdowns kept him out of the game. But he got a letter that changed everything - EyeMart Express was coming to Lee’s Summit and looking for an optometrist.

“And the rest is history.”

A history that includes working side-by-side with Meshelle, his office manager, and raising Aidan and Connor. Aidan is at the University of Kansas in sports marketing and Connor, a student at Lee’s Summit

West, will be taking classes in the medical field at the Summit Technology Academy.

“Who knows, he may become a doctor like his dad.”

The mere act of seeing more clearly is the reason Dr. Stock opens up each day.

“Nothing makes me happier than seeing a young child or adult that hasn’t seen well in a while put on their contacts or glasses and they just light up,” he said. “I remember a 5-year-old came in for new glasses. She was looking around, pointing at things, I was nearly in tears. I told my staff, ‘This, this is what we live for as optometrists.’”