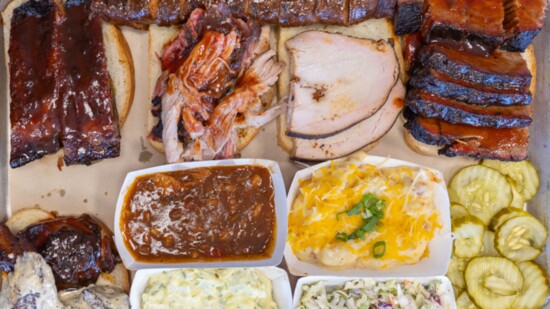 In a city with such rich history in barbecue, one does not break into the Kansas City meat scene without significant talent. In the Northland, one can experience Kansas City barbecue in all its forms, from the classic award-winning barbecue restaurants to craft joints that reevaluate traditions within the community. It’s up to the hungry to decide if they’re simply drawn towards old school or new school. One doesn’t need to fret the decision too much, as we’ve rounded up notable pitmasters and all are experts at keeping their brisket (the meat that dries out the quickest) tender and succulent.

An aspect of Kansas City barbecue that makes it stand out from the rest in the country is the variety of meats, seasonings, and sides. Smokin’ Guns BBQ, a restaurant located adjacent to an industrial area of North Kansas City, is a long-time local favorite and known for its line of rubs that include unique spices such as cinnamon and clove and even a hint of cocoa. Husband and wife duo Phil and Linda Hopkins left their corporate jobs of over a decade after making a name for themselves in barbecue competitions across the country, including winning the title of grand champion in the 1999 Jack Daniel’s World Championship Invitational Barbecue Contest. Needless to say, the Hopkins have earned their place among the greats in barbecue history.

Smokin’ Guns BBQ has been featured on Guy Fieri’s Diners, Drive-Ins and Dives. The Hopkins’ history of creating exceptional barbecue lends their restaurant as one of the more classic styles of barbecue one can enjoy in the Northland. Nonetheless, Linda Hopkins credits their continued success to consistent and quality barbecue as well as adding menu items such as barbecue nachos, a smoked meatloaf sandwich, and a baked potato topped with beans and coleslaw.

However, a competition background isn’t necessary to create noteworthy barbecue. Owners and brothers Nick and Sam Silvio have restauranteur backgrounds that date back to their father who opened the first Kansas City pizza spot in the 1950s. Hawg Jaw Que and Brew, also located in North Kansas City, is their dive-style restaurant that takes a mellow twist on Kansas City barbecue with its diner meals, homey ambiance, and microbrew beer selection. The brothers have integrated their Sicilian ancestry within the menu by adding their homemade Italian sausage to select menu items.

Nick and Sam are no strangers to great barbecue, however. All meats are smoked with cherrywood, which Nick claims to allow more of the natural flavors of the meat to come through — ideal, considering all beef is 21-day aged Sterling Silver Choice. The workin’ folks special is a popular menu item, including sandwich with a meat of your choice, a side, and a soft drink. The Irish hawg is a take on the classic Rueben sandwich consisting of smoked corn beef and smoked sausage. The loaded fries are seasoned crispy fries topped with indulgences such as chipotle sour cream, BBQ queso, and jalapeños and is a favorite menu item as it seems to only acquire deliciousness the longer it sits at your table. Continuing their innovative home style plates, the brothers have future plans to combine their love of barbecue and their Italian roots to introduce barbecue pizza to the menu.

Jousting Pigs BBQ in Liberty and Wabash BBQ in Excelsior Springs are both restaurants that specialize in award-winning barbecue. Jousting Pigs BBQ shares the space with 3halves Brewing Co., making it an ideal location to devour competition quality barbecue and craft drinks in the historic square of downtown Liberty. All meats are sliced by hand when you order, and the sauce is particularly unique with its sweet yet smokey flavor. The restaurant uses a wood fire smoker as opposed to the common rotisserie smoker. This requires a more hands-on approach and attentiveness when handling the meat, making it a labor of love that shines through to the end product.

Wabash BBQ is a small building tucked away near the Elms Hotel and Spa. It is a hidden gem with big accomplishments, most notably being voted the best ribs in Missouri according to the USA Today. The restaurant makes a special effort to create an environment for the community of Excelsior Springs and adorns a blues garden so customers can enjoy live music along with their good eats.

Similarly, Scott’s Kitchen, located near the airport, may not catch one’s eye from the highway. The restaurant was previously a car rental business, and the building is surrounded by a large parking lot. However, the restaurant’s unassuming exterior only amplifies the customer experience because right as one enters Scott’s Kitchen, they are greeted with an enthusiastic staff, plenty of seating, and a sizable menu that serves breakfast and lunch. The owner, Scott Umscheid, can be found engaging with his customers as if he has known them for years (and this may be the case in some situations). In addition to airport travelers, the kitchen has built a following of loyal locals due to primarily serving lunch. Amazingly, the restaurant is closed on the weekends.

Scott’s passion and barbecue competition background shine through each plate as all meats are smoked just the day before. In addition to the conventional meats and sandwiches, the menu offers a refreshing amount of variety, consisting of house made sausage, burritos, bowls, and even tacos. The smokey white fish tacos and house made chipotle ghost pepper jack smoked sausage tacos are among customer favorites and the jalapeño coleslaw provides the perfect kick to cut through any tender and greasy meats you may feast upon. Scott’s passion for his craft is contagious and one can’t help but find the innovative food just one of the many endearing qualities of this humble place.

Andy Fox of Fox & Fire considers himself a small-town guy through and through, having been born and raised in a small town south of Kansas City. However, his ultimate awakening with barbecue happened while exploring the barbecue scene in Texas. In awe of the community as well as the food itself, with its simplistic approach of letting the meat provide much of the flavor for each plate, he decided to pursue this style on his home turf of Missouri. Andy operates out of a trailer in Kearney on a small lot, joined by two offset smokers. The trailer is only open on Saturdays and you can expect a line when you arrive. Not only has the barbecue become a favorite weekend lunch spot, but food handled with such craft and care is not made to be served quickly.

The menu is written on a piece of paper and taped onto the outside of the trailer. Meats are ordered by the pound at the window and cut to serve. All meals are served with no frills and can stand well enough on their own — Kansas City’s beloved topping of barbecue sauce is entirely optional. The sausage link is juicy, the brisket and ribs, in their pull-apart splendor, are truly something to admire. All sides are homemade.

Andy is certainly bringing the new school take on barbecue to Kansas City and it is more than welcomed. While many are wondering the next steps for the trailer, Andy is choosing to focus on quality over quantity for now. He hopes the lot in Kearney will continue to provide a space for people to slow down, break bread together, and create a community.