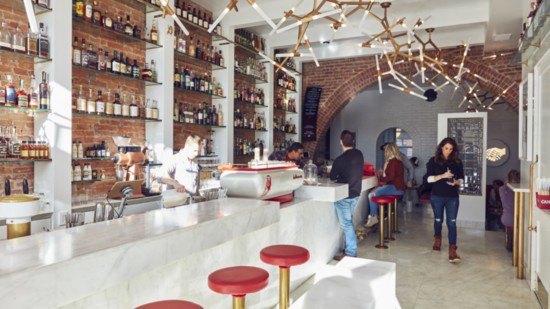 New Venture from Same Lee's Summit Couple Behind The W

Shane and Merideth Veritasi, owners of The W in downtown Lee’s Summit have once again transformed a space worthy of praise.

Hand in Glove is the couple's new venture which is a coffee shop and cocktail bar opened seven days a week.

The space was built in 1887 and sits just below The W with a separate entrance next door. Over the years it’s been a bakery, a hat store, a jewelry store and most recently was a window blind business. During the renovation they found the brick building sitting on old railroad ties and had to pour 10-foot sections of concrete on three sides of the building.

Much like The W, they did most of the renovation themselves over a two-year period.

The space is long and narrow, but plenty of natural light flows in from the large window front. The decor is bright and features white marble imported from Turkey along with white subway tile. The red leather bar stools with brass accents add a nice pop of color. The La Marzocco espresso machine has been custom painted to match featuring red trim and brass accents.

If you are coming in with a large party call ahead and ask to reserve the snug seating area. It will hold up to 10 people and features cocktail tables with U-shaped booth seating.

The back wall of the bar features original brick with glass shelving and a custom made library ladder. Also be sure to notice the unique brass accented light fixtures that took more than 55 hours to assemble, wire and hang.

Unlike The W, which features more outside-the-box elevated cocktails, the cocktail menu at Hand in Glove will be more approachable and include familiar drinks for those who aren’t as adventurous. Although guests are encouraged to experiment with their coffee drink orders by adding a shot of one of the many liqueurs, amaros or spirits Hand in Glove offers.

The coffee menu includes all the classic espressos, cappuccinos and lattes but also features a tapped nitro espresso and tapped nitro latte. Local Post coffee is used for the espresso, and the drip coffee is also locally sourced and will rotate between Blip, Monarch and other Kansas City area roasters.

Seven complimentary house-made syrups are available for you to doctor up your drink and add a touch of sweetness. While the honey, agave and cane will stay year round, other flavors will change with the season, so flavors such as pumpkin and spiced pear will appear in the fall. Oat milk is available for the milk alternative to avoid any nut or soy allergies. And there are plenty of tea choices for those who do not want a cup of Joe.

If you are into day drinking the cocktail menu is available all day and also features a variety of batch cocktails on tap including a steali deali which is a play on the aged, vodka-soaked pineapple drink called the stoli doli found at a famous steakhouse. There is also an Old Fashioned, Negronish, smoked vanilla, a seasonal sangria and espresso martini. Beer aficionados will appreciate the Stella Artois served from the rare gooseneck branded silver tap. Built-in smokers are used for specialty drinks.

As evening approaches and into the night you can still get your caffeine fix if needed, but the sound of the espresso machine is replaced by martini shakers and glasses clinking as friends gather for cocktail time.

Hand in Glove is family-friendly and offers plenty of non-alcoholic beverages including a classic New York egg cream which contains neither egg nor cream, but the history of how the name of that beverage came about can be saved for another article. Hand in Glove will make your egg cream to taste using Fox’s u-bet flavored syrup of choice, milk and soda water. Eventually, some lighter fare will be added to the menu and include items such as croissants, quiches and pies.

"The inspiration for Hand in Glove came from our visits to Havana Cuba. There's this small French Bistro in Old Havana named El Biky that we would walk to every morning and grab an espresso and croissant. The space was built in the late 50's and was where everyone in the neighborhood would converge to start their day. The small space covered in white marble and brass fixtures would get very crowded every morning as people would start the day with a Café Cubano or end their night with a Rum and coffee.

The people standing around finishing their drinks would converse for a couple minutes and head to work. For us, it felt like the definition of a real community and we wanted to bring it back home with us to Lee's Summit." - Shane Veritasi