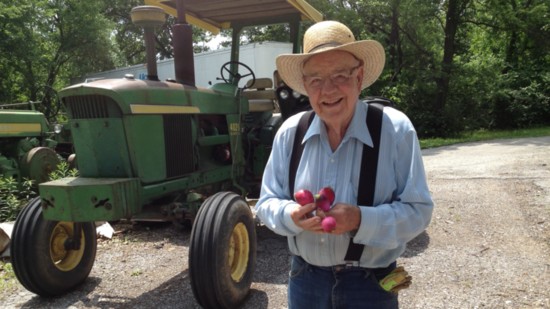 It's early morning when Sandy Vivian gets the call. "Have a couple of rows of arugula that I won't be able to harvest. Do you want them?" the farmer asks.

Of course, she would answer. And with that affirmation, the staff of After the Harvest would spring into action, finding volunteers from their Vegetable Emergency Gleaning Squad to drive to the farm, harvest the arugula, and deliver it to an organization that can use it.

Gleaning is a concept foreign to most people but it's After the Harvest's raison d'ê·tre. Instead of growing fresh produce themselves, they rescue perfectly good food from rotting in the fields or finding it's home in the landfill after not selling at the farmer's market. With 10 million tons of produce discarded or left unharvested on a yearly basis and food insecurity growing, the need for gleaning is obvious.

After the Harvest finds produce from a number of sources. Communications director Sandy Vivian says that they have developed relationships with farmers around the Kansas City metro area (currently 202 farmers), offering to come harvest what they can't use or pick up what doesn't sell after market days. Some farmers grow a row or two extra just for them. They also work with food distributors such as C&C Produce to source their excess produce or items that aren't perfect enough for the grocery stores. Without the organization, the produce would go to waste. With them, they are able to redistribute the food to the people that need it.

So where does that produce go? After the Harvest works with 367 different agencies but their main recipient is Harvesters, the Community Food Network. In fact, they are Harvesters' largest produce donor, helping to flesh out shelf-stable foods that come from wholesale purchases and donations.

In addition to their gleaning from individual farmers, After the Harvest also fundraises to fill out the remainder of their produce supply line--truckloads of imperfect produce.

"When you go to the grocery store and you see all the zucchini that are the same size, it's not because they grow that way," laughs Vivian. While grocery stores only select the most aesthetically pleasing fruits and vegetables, there are tons of 'seconds' that are perfectly edible that will never see a supermarket shelf because they are considered imperfect. With donations raised, they purchase truckloads of these seconds to donate to Harvesters.

While After the Harvest is dedicated to feeding the stomachs of the hungry, they are also interested in feeding the souls of their volunteers. With more than 1000 volunteer gleaners each year, Vivian says that there are a variety of reasons that bring them volunteers, from corporate team building activities to getting back to the land for familes.

As unemployment rates rise, Vivian wonders how much the demand on food banks will rise. For many, food insecurity was a vague concept that is rapidly becoming a reality. After the Harvest hopes to alleviate whatever needs arise.

In a post-COVID-19, Vivian says that more access to fresh produce, not less, is essential.

"Everybody deserves to have fruits and vegetables. No matter what the health situation, fresh produce is an essential way to ensure healthy bodies. We are trying to make sure that our poorest folks and those in dire need can get that as well," says Vivian.

For more information, to donate, or to sign up to glean, please visit AfterTheHarvestKC.org.