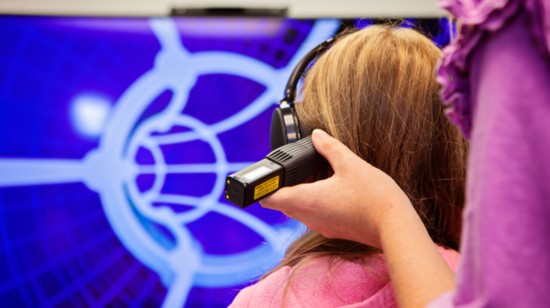 When Alex and Lauren Nelson’s daughter, Harper Mitzie-Lou, was born in 2014 with a serious congenital defect, they knew it would take a team of people to help her achieve developmental milestones.

Sadly, Harper Mitzie-Lou passed away before she was even 2 months old, yet it gave the Nelsons, who are both chiropractors, a passion for neurology and chronic disease in their practice. Today they run HML Functional Care and Chiropractic in Lee’s Summit and work to treat children with ADHD, Autism, movement disorders, vertigo, and various other developmental disorders.

“We have dedicated our business to Harper Mitzie-Lou,” Dr. Alex says. “Every aspect of what we do has her name written all over it. We understand what it’s like to be in those parents’ shoes.”

The Nelsons are both board-certified in chiropractic medicine and have post-graduate education in functional neurology and functional medicine. They opened the Lee’s Summit practice in March, and Dr. Maran Tennis has joined them as well.

Dr. Alex says when a patient and their family come to them, they are typically looking to get to the root cause of the problems. They have often been to traditional therapy and not achieved the results they need.

“Functional neurology is new in terms of a way of getting better neurological function out of people. It combines all of the best understanding of brain function and what goes wrong when things aren’t operating correctly, but most importantly what you can do about it,” Dr. Alex says.

He says treatment often looks like personal training and physical therapy at the same time. It specifically works on activating underperforming areas to increase function, and each exercise is custom-tailored to the patient’s need for skills such as strength, balance and sensory processing.

They might have someone focus on hitting a wireless switch to a beat to work on timing, rhythm and coordination, or they could have someone hold a plank or stand on a disc to increase balance and core strength. Sometimes these therapies are combined into one exercise.

They do an extensive evaluation with new patients that includes paperwork and examining gross motor skills, sensory processing, ocular movement cognition and social-emotional capabilities. They make sure the child is a good fit for their practice and then develop a treatment plan. During treatment, the child could come in for therapy anywhere from a few times a week to upwards of four times a day.

Joy Kellenberger says her son has many developmental delays and was non-verbal before coming to the Nelsons but has since made improvements with the functional neurological therapies.

“We have found that these therapies have focused at the root of the problem and progressed through each developmental stage to improve his function, instead of just treating symptoms,” Kellenberger says.

She says her son can now communicate verbally, read aloud and is demonstrating empathy and expression in a manner he previously lacked.

Katrina Hachinsky says her daughter suffered seizures and brain injury as a baby, but after treatment she is now talking more, making better eye-contact and has more movement and flexibility than before.

While the Nelsons have a special interest in such developmental disorders, they also provide traditional chiropractic services as well.

“I love working with our patients and seeing their untapped potential getting unleashed,” Dr. Lauren says. “Watching and hearing patients surpass their goals and opening up new doors for them is the greatest honor.”