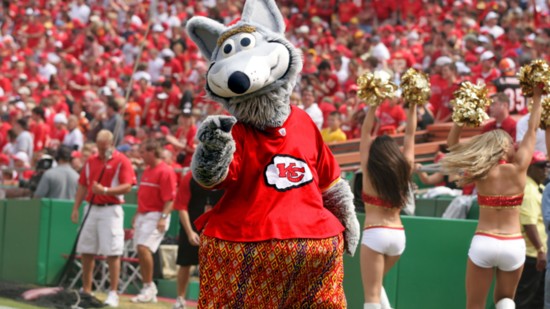 Our beloved Chiefs football mascot KC Wolf turns 30 this year, but his back story belongs to Dan Meers. It’s a back that includes titanium rods.

“I call it my incident instead of my accident because I don’t believe life has accidents,” Meers explains of the failed zipline descent at Arrowhead in 2013 that sent him careening so hard into the stadium seats that they were jolted from the cement. The 75-foot fall left Meers with seven broken ribs, a collapsed lung, shattered tailbone, cracked sacrum, and an uncertain prognosis.

The doctor told him he was fortunate not to be dead or paralyzed. The back surgery, hospitalization, and ensuing painful rehabilitation would sideline Meers for six months. But what could have been a devastating loss became an overwhelming victory.

Meers chose to write through the pain, authoring the book Wolves Can’t Fly, which chronicles his experience (with all proceeds donated to charity). His humor, insight, and optimism have put him in high demand as a motivational speaker as he inspires audiences of all ages.

“I’m passionate about encouraging others to live a life of influence,” Meers says. “Every day should be lived with character, purpose, and passion. My passion is my faith, family, and impacting my world through relationships. My relationship with the Lord and my relationships with others is what helped me during my recovery.”

“I got to know Tony when he coached for the Chiefs under Marty Schottenheimer,” Meers says. “I have tremendous respect for how Tony lives his life as a role model.”

This upcoming football season will be Meers’ 30th year as KC Wolf—the longest mascot career in the NFL. Missouri-born Meers was Mizzou’s Truman the Tiger mascot during college and then the St. Louis Cardinals Fredbird mascot before being recruited by the Chiefs who wanted a more interactive mascot.

From the outset, Meers was transparent with the Chiefs that he wanted to use the mascot platform to speak to groups.

“Every morning, you have something to be thankful for. Rise and shine or rise and whine. It’s up to you.” –Dan Meers

“I’m thankful they let me do that. Mascots are typically discouraged from taking off the mask and revealing their alter ego, but the Chiefs allowed me to build authentic relationships and be a positive voice. They’re truly committed to making an impact on our community.”

That forward-thinking by the franchise has allowed Meers to make KC Wolf appearances by the thousands. He has made appearances in more than 13 countries around the world, including Tanzania this month to work in an orphanage with his entire family.

“I can communicate with kids in any language when wearing a costume,” Meers says.

The Chiefs’ recent successful seasons have made Meers even busier: “When we’re winning, everybody requests KC Wolf. We did more than 600 appearances last year.”

To keep up with demand, Meers has had to hire several assistants, but he’s highly selective, looking for “characters with character.”

“I look for high-energy, high-character guys who won’t reflect poorly on the reputation of the Chiefs or KC Wolf, which took years to build.”

Meers says his biggest challenge is finding time to stay in shape. He spends hours on his stationary bicycle, and surprisingly has no limitations, even planning to skydive this summer with his son. Although his body is full of scars, his humor remains: “It’s a good thing I’m a mascot and not a Chippendale dancer,” he jokes. “As long as there’s ibuprofen, I hope to keep going.”

To come up with fresh material Meers attends the NFL Mascot Convention every year where they share ideas, skits, and attend an awards ceremony. For the past three years, the “Dan Meers NFL Mascot Lifetime Achievement Award” has been presented to honor Meers’ legacy.

“I’m not out looking for rewards in this life,” he says and shrugs with humility. “When I get to heaven is when I hope to collect my real rewards.”