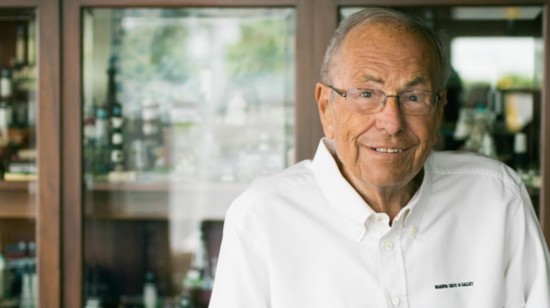 A Lifetime of Lotawana Memories

Jack Schwinder, lifelong Lotawana resident and owner of the Marina Grog and Galley, has had a full life of adventure with a keen entrepreneurial spirit. We recently took a walk down memory lane with Schwinder about some of his time spent at Lotawana.

Jack was the first baby born on the lake and grew up in a house at B15.

Jack had a job shagging milk for the milk man at Lotawana. On weekends, he met the milkman at the community club at 4:30 am and loaded milk into baskets and delivered milk till noon. He got paid $2 a day.

Jack started racing sailboats and continued to race for the next 60 years.

He started a business sharpening ice-skates on a wheel in the basement of his parents house for winter skaters.

He started a business mowing lawns with his friend Bob White, called White and Schwindler Corporation. They took their mowers house to house by boat and would mow all morning and used the money to gas up their boat for skiing in the afternoons.

Jack and Bob started a diving business where they dove for lost stuff in the lake, and they were quite successful at it. At that young age, the thought they had made enough to retire on.

Jack was one of the first at Lotawana to earn his Eagle Scout. After attending a scout camp in Oseola, Missouiri he was asked to stay at the camp as a permanent staff member as part of the waterfront staff at the camp.

Jack attended K-State for two years. While attending the university, he worked as a manager at Wildcat Lanes Bowling Alley. He helped start the Big 8 Bowling League at the school.

Jack served 6 months active duty and spent the remainder of his time in the reserves. After heading to a radio and morse code training, the soldiers were missing the instructor when they arrived. When asked if anyone knew morse code in the class, Jack was able to step forward and offer his knowledge because of his background in Scouts and became the instructor for the class.

Joined his father in the Food Brokerage business. After a few years,  Jack took over the business and ran it successfully for 30 years and had five offices all over the Midwest.

Jack purchased the property that would become The Marina Grog and Galley because he wanted to bring something to the lake that would benefit the community.

The Spa At Briarcliff