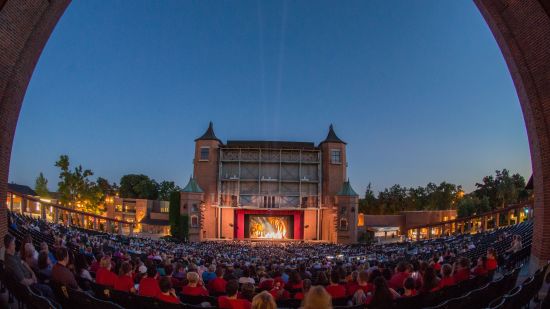 During these months, the nearly 8,000 seat landmark is typically playing host to a variety of Broadway shows and concerts. The excitement and energy of each should be spilling out of the theater right now, right along with the whatever music is serenading guests that night.

Unfortunately, that’s not the case these days. The current public health crisis has forced an extended intermission to the standard line-up -- but as they say, the show must go on.

This Friday marks the Blue Star Awards -  the Tony’s of the student theater scene – where the creative efforts of 5,000 students from 54 metro schools are celebrated. For the first time in the program’s 18-year history the ceremony will be a virtual event.

But thanks to the dedicated team at Starlight, it will be an event.

In a time marked by canceled milestone moments and when high school students have had to shoulder an unfair share of interruptions to their academic and extracurricular experience, Starlight didn’t want the Blue Star Awards to be added to an already long list of “missed”. Rather than just announce this year’s winners, the team has produced an entire award ceremony to stream online.

“While we can’t celebrate together in-person this year, students, teachers and families can look forward to many of their favorite elements of past Blue Star Awards ceremonies – and a few new twists, too,” shared Barb Schulte, Starlight’s Vice President of Community Engagement.  “There will be performances (recorded at safe social distances in advance), trophies, guest award presenters and more.”

It's an effort that hasn’t gone unnoticed by those involved.

“I truly appreciate Starlight for working to bring the best experience they can right now to students and to continue to validate the work we do,” said Hannah Samson, a Blue Star Awards Student Council Member and recent graduate of Liberty North High School. “I can’t imagine the work going on behind the scenes to make this event still happen in an entirely different format. I am so grateful for people like their multimedia marketing team and Andy Pierce and Katie McKernan who are dedicated to the students. In a time where everything has been altered and many more things canceled it’s nice to have something still on the calendar to look forward to.”

Samson is headed to Boston’s Emerson College this fall to study Media Arts Production with an emphasis in directing and screenwriting. Her high school theater career will be capped by these awards – not only was she the president of her school theater troupe, she also served as the student director, stage manager, and props manager for Liberty North’s Broadway version of “Cinderella” – plus she is nominated for the Rising Star Scholarship this season.

“The Blue Star Awards are an opportunity for me to get valuable feedback on the work I do that will aid me now and in my professional career as I continue to direct,” she said. “It holds a special place for me as it connects me to my peers as we all work towards a common goal.”

That connection, as well as feedback and recognition, are a big benefit of the awards, according to Alisha Morris, the Theatre Director at Olathe West High School. Her students did “Xanadu” this year, up for eight awards.  She shared that the program is a fantastic way to instill a healthy competition between Kansas City Schools while also giving some recognition to these talented students and programs.

“I always tell my students that awards are just like the sprinkles on the sundae — the ice cream is still delicious without them, but a little extra sweetness never hurts,” said Morris. “Participating in the Blue Star Awards means that my students get a chance to be a part of something bigger, to expand their community bubble by witnessing other schools perform, and to experience the true power of creativity and camaraderie.  It’s so much more than just the awards — or the sprinkles on the sundae — it’s the joy of every delicious moment from rehearsals, to performances, to adjudicator feedback, and to the astonished faces as they witness the immense talent in Kansas City up on the Blue Star Awards stage.”

While it’s understandable difficult to try and navigate teaching performing arts in the era of Covid-19, Morris is viewing it as an opportunity to get creative.

“We’re all familiar with the age-old adage, “The show must go on” and theatre people are really good at doing this. But, what happens when the world just… stops? We make the show go on — but in a different way. We are in a unique period of history where we have the opportunity to literally redefine theatre. My district has elected to produce only virtual performances for the fall 2020 semester. While this task is definitely daunting, my head is swirling with new creative possibilities. I keep imagining that 10 to 100 years down the line, they’ll look back at how we all made theatre history and stumbled upon something that opened up a world of opportunities.”

Another unexpected silver lining in all of this? The stream is available to the public – offering a peek behind the curtain to Kansas Citians at large and friends and families across the country. For those of us with younger ones at home, the switch to digital means they get a fascinating chance to watch the big kids in action.

“Any fan of musical theatre, live performance and talented, committed kids should watch the Blue Star Awards ceremony this Friday night,” Schulte shared. “You’ll definitely be entertained and you might catch a glimpse of some future stars of the stage!”

The show starts July 31 at 7:30 p.m. You can tune in on the Starlight Facebook page, here.

Hey, you! I'm Chelsey - a KC momma with a passion for celebrating local stories, sharing experiences, + simplifying whenever possible. A bit of background on me: I started my career in journalism before bouncing into the public relations arena. While I loved my time working with big brands at a global firm, launching a boutique PR agency and getting to work closely with...
Read More In My Profile