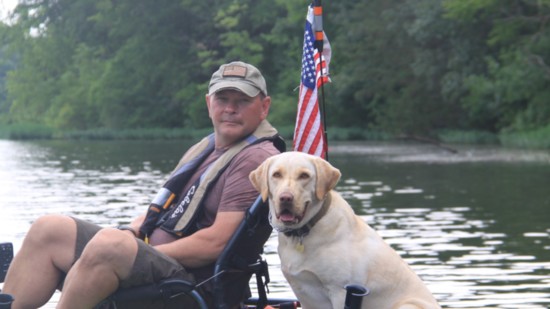 Dogs Bring Peace to Veterans Fighting Their Own War

Nani notices Mike’s growing anxiety even before he’s aware of it. From the end of her leash, she gently leads him to a quiet spot in the room and leans her tall frame against his legs. He sits, and she climbs into his lap to comfort him.

Even before he left the Army, Mike Ragsdell began showing symptoms of post-traumatic stress disorder – specifically anger, depression, and often-paralyzing anxiety – that he attributes to many “bad experiences” from his 14 years of service.

“I couldn’t bring myself to get out of the house,” he says.

The medications only made him feel like a zombie, and counseling had little impact. If he couldn’t find someone to accompany him, he would often cancel his doctor appointments, and public outings were almost out of the question.

“Nothing seemed to help,” he says. “I had no quality of life.”

Ragsdell was, however, the perfect candidate for Warriors’ Best Friend, a Liberty nonprofit that adopts and trains service dogs specifically for veterans with PTSD and traumatic brain injuries.

“There’s no one cure-all, and a service dog is not for everyone,” says Samantha Jeffers, the group’s director of development. “But for some people, it’s the thing that works best after they’ve tried many different types of treatment.”

Jeffers’ father and sister, Bella, founded the organization in 2013, combining two of their passions: rescuing dogs and giving back to veterans. Bella previously worked with another service dog organization where she learned how to train dogs to serve vets with PTSD, before moving back to the region and launching Warriors’ Best Friend with her family.

The organization adopts its dogs from local animal shelters and begins by teaching them 29 different commands—from basic skills like sitting under a desk and climbing into a car to others that address PTSD symptoms. One command, for example, teaches the dog to stand between the veteran and anyone approaching, creating a barrier and personal space that helps the person feel safer in tight environments.

“For some people, this has meant being able to go to their kid’s band concert, being able to go to the grocery store on your own or not in the middle of the night when you know nobody will be there,” Jeffers says. “For every veteran we place a dog with, it has a profound but also extremely unique impact on their life.”

Beyond the new commands, however, are those feelings of nonjudgment and unconditional love dogs are known for.

“It doesn’t have to be a service dog for you to know what kind of loving and compassionate and intuitive beings they are,” Jeffers says. “It’s about going through all of this, feeling shame, stress and anxiety and letting out your anger, and knowing that dog accepts you unconditionally. I think that’s a huge part to the healing process.”

A self-described “dog person through and through,” Ragsdell knew he found something special when he first met Nani, a Weimaraner-Great Dane mix, during one of his first encounters with Warriors’ Best Friend.

“I fell in love with her right there on the spot. I couldn’t wait for class to begin.”

The organization thoroughly vets all applicants to ensure they can offer a good environment for a dog, and the evaluation includes a home visit and training at the Liberty facility. The group has placed 18 dogs so far, with veterans both male and female and in various stages of life. The service is completely free for veterans, and the group covers all expenses during the training process, including food, hotel and activities.

As Ragsdell can attest, the lengthy placement process is more than worth it. After bonding with Nani, he says he was able to summon the courage to embark on a bucket-list trip to Niagara Falls with his wife, and even reconnect with his son, who he hasn’t been able to talk to or see in eight years.

“Having her there was enough for me to be able to break down my wall a little bit and be able to talk to him.”

He says Nani gives him the confidence and security to navigate a typical daily routine now, such as appointments or trips to the store on his own. She’s also inspired a new passion: working with other veterans at Warriors’ Best Friend. Since receiving his dog, he has trained under Bella and works directly with both the new adoptions and the veterans.

“Having her got me out of that shell of despair, and it’s given me another purpose,” he says. “I used it to get me to a better point in my life, so I’m just trying to help others get to that point.”

Indeed, the best dogs always do.

To learn more about how you can support Warriors’ Best Friend, visit WarriorsBestFriend.org.