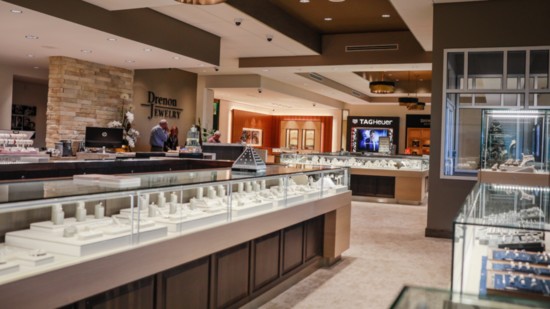 This Trusted Jeweler is a Third-generation Company, Offering Unique Pieces with Complete In-house Design and Service.

As WWII was coming to an end in 1945, Mike Drenon and his, wife, Pansy, opened their first jewelry store. As they say, necessity is the mother of invention, and a broken watch he could not afford to fix inspired him to teach himself the craft. He went on to learn everything there was to know about watchmaking and decided to open his own shop.

Their first location was in a strip center on 24 Highway in Fairmount, IN. Because they had a tight budget, Mike built his own showcases in his living room. Without a safe, he brought the jewelry back and forth to the shop in a shoebox.

Their only daughter, Karen, took over the business in 1978, along with her husband, Frankie. They moved to a second location on Lee’s Summit Road in 1999, where they continued to grow.

The current owner, Steve Frisch, is a third-generation Drenon. He and his wife, Cheryl, have owned the store since 2009. Steve started in the business at age 7 and knew from then that this is what he wanted to do for the rest of his life. He attended Texas Jewelry Institute where he learned to be a bench jeweler. After many years on the bench, it became clear that Steve’s true talent was in sales. He has grown Drenon exponentially since 2009.

“Under his leadership, we were recently able to move to our new 8,000-square-foot store and add many highly desired designer brands, giving us one of the largest inventories in the Midwest,” says Savanna Frisch, fourth generation Drenon and a sales associate.

As times have changed, so has the jewelry business. For example, when a customer comes in to purchase an engagement ring, the photo of the desired ring is often on the customer’s phone. Steve discovered that 95 percent of engagement rings are made in China, so he set out to master the art of custom design. Instead of sending the rings out to be made, they custom-design the rings 100 percent in-house within seven to 10 days.

“We are not merchants, we are craftsmen,” Steve says. “There are thousands of jewelry stores in the United States, but less than 5 percent of them have the capability to do what we do. Anyone can sell you a ring out of a case, but it takes years of expertise and state-of-the-art equipment to make the one-of-a-kind ring of your dreams. We've invested hundreds of thousands of dollars into this concept because we believe so strongly in it.”

Steve states that their shop is three times larger than average and has cutting-edge equipment: “Our state-of-the-art shop is totally glassed in, so you can watch our jewelers design on the computer, print waxes from the 3D printer and even cast at 2,000 degrees Fahrenheit.”

The custom design process starts with a simple conversation with the customer.

“We can look for inspiration on the internet or around the store,” he says. “Once we get an idea of what the customer is looking for, our jeweler will take it to the CAD and create a digital image, which the customer will approve before proceeding. From there, it goes to the 3D printer, which will give the customer the opportunity to touch and feel the piece in wax form to ensure it's exactly what they had in mind. Finally, it moves into casting. Because our shop is glassed in, our customers now have the opportunity to watch their piece be casted. When the piece is completed, everyone feels as if they were truly a part of creating it, making it even more special.”

Drenon Jewelers employs four graduates of the most prestigious school for jewelers – the Texas Jewelry Institute in Paris, Texas.

With Valentine’s Day upon us, Drenon is once again continuing its 35-year tradition of sending out keys to customers. They bring in their key and see if it will open their treasure chest. The chest holds prizes worth thousands of dollars.

“We had a lady win a $10,000 Rolex a couple of years ago!” Savanna says. “Our customers look forward to participating every year while they stop in to buy their Valentine’s Day gift. Valentine’s Day isn’t just about chocolate and flowers anymore. Many of our customers put as much thought and money into a Valentine present as they do a Christmas or birthday present. With one of the largest inventories in the area, we have items starting at $50 and going up to $700,000. We take pride in having something to accommodate every budget.”

With most of its business coming from word-of-mouth referrals, the team at Drenon takes pride in each diamond they mount and each smile they see. And satisfying generations of loyal customers.

In a world where the internet is demolishing brick and mortar retailers, they feel blessed to still be growing. For the last decade, an average of 1,000 independently owned jewelry stores close every year, yet Drenon continues to thrive and has more than doubled its inventory and showroom.

“We know there are a lot of variables to our success, but we truly believe a large part of it is because we offer something that no one else in Kansas City does,” Savanna says.