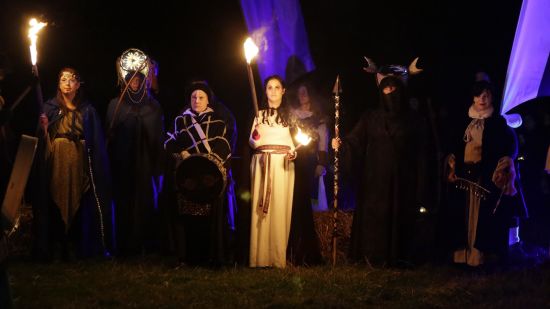 From costumes, jack-o-lanterns to evil spirits, it all started in Ireland

Like carving jack-o-lanterns for Halloween? Well, you can thank Ireland. How about dressing up in costumes? Yep, that’s Ireland! What about trick-or-treating? Yes, Ireland again. What about celebrating Halloween? You guessed it — Ireland! Yes, our favorite fright-filled, pumpkin-spiced lattes and candy corn holiday started in Ireland more than 3,000 years ago.

Halloween can be traced back to pagan Ireland when the Festival of Samhain was celebrated to mark the beginning of winter. As the summer months were waning, the Celts believed that the world of the living and the world of the dead would mingle and some would be pulled into the world of the dead before their time. In order to ward off those kidnapping evil spirits, people dressed in costumes to scare off ghosts, fairies, hobgoblins and demons.

They believed that those who haunted the land of Halloween represented the four aspects of Samhain: light, dark, mischief and change. The heroic figure of Fionn Mac Cumhaill and the gentle spirit of the goddess Boann, who represented the light, were the positive influences. Boann lived in a well within the Salmon of Knowledge, and when it flooded, it washed Boann away and she became the River Boyne. She eventually gave the Salmon of Knowledge to Fionn Mac Cumhaill, who ate it and gained all the knowledge of the world. He was charged with killing the evil goblin Aillen, who every Samhain tried to burn down the great halls of Tara. When Fionn completed the deed, he was made the leader of the High King’s elite warriors. We’re not saying it’s a fact, but don’t be surprised if on Halloween, Fionn’s two loyal hounds announce the arrival of his spirit and the arrival of Boann with a lowly figure with the head of the white cow and a body made of reeds. Just say—we warned you!

The dark aspect of Samhain is the goddess of war, Morrigan, who takes the form of a raven and leads an army on the hunt for human lives. If you hear flapping on Halloween, watch out! It just might be Morrigan or his gang. Mischief and mayhem will be courtesy of the ill-mannered Fear Dearg or the Red Man. He loves to play practical jokes, the more gruesome the better. Of course, be on the lookout for the spirits of change—known as púca—who can alter the fortunes of anyone they meet. They can be in any shape or form, but they have black hair and golden eyes. To get through the holiday unscathed, we suggest dressing up in costumes to fool the spirits.

One of the biggest Celtic celebrations was at the top of Tlachtga, or Hill of Ward in County Meath. The Celtics were lighting fires more than 2,000 years ago here, and old manuscripts show that the Celts lit a fire here from which all the fires in Ireland were rekindled. Even today, around the Hill of Ward and nearby Hill of Tara (where the High Kings of Ireland ruled), there are fiery celebrations with live music, performances, light installations and fire.

In Irish folklore there is a man named Stingy Jack, who, for some reason, played a trick on the devil. Of course, the devil needed revenge, so he doomed Jack to wander forever with only a burning ember inside a turnip to light his way to the fires of Hell. Fast forward many centuries later, and Irish immigrants brought this tradition to America where they found the pumpkin a much better vessel than turnips and large potatoes to carve.

Trick-or-treating is every kid’s favorite part of Halloween, and that tradition started in Ireland with children and the poor going door-to-door asking for money, food or kindling. They often sang or offered prayers for the souls of the dead in return for a donation. One of the favorite foods was a soul cake, which was a flattened bread with fruit. This tradition is known as “souling.”

As Halloween comes around harvest time, there are plenty of fresh goods, meats and drinks to be had, and that included turnips, apples, apple cider, mulled wines, gourds, nuts, beef, pork, poultry and ale. When the Celtic celebration of Samhain was merged into the Christian All Hallows Eve, the day before All Saints Day, to create Halloween, it became a day of preparation and fasting. So it became a vegetarian celebration with the likes of potato dishes including champ, boxty, fadge (an apple cake) as well as barmbrack bread and colcannon.

Colcannon is a popular Irish dish made with mashed potatoes, kale or green cabbage and onions. Also on the table is barmbrack, a bread that is eaten year-round, but on Halloween is filled with a few charms for fortune-telling significance and, in honor of the holiday soaked in whiskey, tea or both.

So now, as we dress up, carve our pumpkins and tell tales of spirits—good and bad—we can thank the ancient Celts in Ireland for this crazy holiday that is one of the most popular in the world. I can't think of anything better a fun-filled Halloween—even during COVID-19. Yes, I can. How about spending Halloween in Ireland, where it all started? That's it! 2021—Halloween in Ireland!