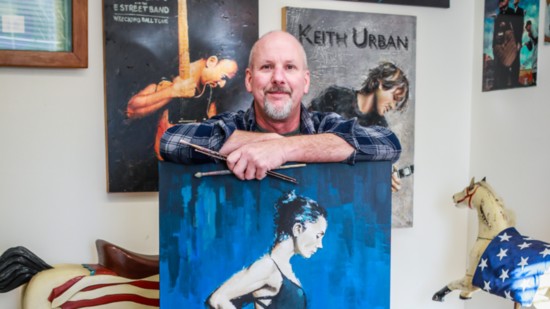 Artist Gary Wilkes has his personal favorites. In his Lakewood home studio, an easel faces personal portraits of Bruce Springsteen and Keith Urban. But Lady Gaga holds a special place in his heart, too.

When Gaga visited the Sprint Center for her “Joanne” world tour in November 2017, Wilkes was in his ninth year of painting the portraits of visiting artists for the concert venue. Through his job at Acme Sign, Wilkes had been contracted to paint Sprint artists’ portraits for three years. He’d well-surpassed that original time frame, and Gaga’s portrait was to be his last.

As was their usual arrangement, his respected mentor at Acme, Greg Price, provided a photo, copy and type style for inspiration. Wilkes rendered Gaga’s concert poster in acrylic, the thick-textured and richly-hued paint lending a three-dimensional feel to the portrait. The artist, satisfied with his work, felt like at least he’d gone out with a bang.

But then Wilkes got a call from his daughter, saying that Gaga had posed on Instagram with his portrait. And the Grammy-award-winning singer went out of her way to share how much she’d appreciated the portrait, so much that the Sprint Center decided to retain Wilkes to continue the portraits.

“Lady Gaga saved my Sprint career,” he says. “The entire time I was painting these, I was thinking that this would be my last one,” he says. “I paint each one like it’s my first and my last.”

Today, the walls of the Sprint Center suites and backstage are lined with nearly 300 of Wilkes’ portraits, signed by both the painter and the recording artists.

While the Sprint Center houses the largest body of his work, the brick walls and billboards of Kansas City have been Wilkes’ canvas since the late ‘70s. After high school, Wilkes took a job on the grounds crew at Kauffman Stadium. He was watering the grass when he saw a man painting a billboard in the outfield. He remembers it was an ad for Camel Cigarettes of a man scaling a mountain.

Wilkes got a job with Calvin Signs doing hand-lettering and mural work. Later, he interviewed at Gannett. His “interview” was to stay overnight and hand-paint a billboard. After he worked at Gannett for eight years, the paint shop closed as billboard ads increasingly became digital prints stretched across vinyl sheets. Wilkes moved to Acme Signs, where he painted murals and billboards and did commercial sculpture work for 24 years before his retirement in the summer of 2018.

Now sleeping in is a perk, but “retirement” represents more of a shift than a cease of creativity for Wilkes.

He sketches and paints every day alongside a hand-carved carousel horse at his home studio. Paintings by Norman Rockwell and John Singer Sargent are displayed nearby on a wall-length easel.

Like the artists who inspire his work, Wilkes’ goal is to tell a story.

His creative process begins with a photo. Sometimes it’s one captured by his wife, Rhonda, an artist in her own right who Wilkes describes as his second set of eyes. He’ll sketch the lines of the photo onto his canvas. Then comes the paint. Acrylic is blessedly forgiving. If Wilkes isn’t satisfied with part of the painting, he moves to a different part of the painting to work, then returns to the original area once it’s dried to make any changes. Each painting is typically five to six layers.

Wilkes describes his style as realistic impressionism. He diverges from clean lines with a splash of orange here, a tick of white there. Broad brushstrokes in the background create an abstract, bokeh-like effect.

“When you walk up to a painting, and it hits you and you don’t know why, it stirs an emotion, then I’ve done my job,” Wilkes says.

The art of portraiture may have come to him later in his first career, but it’s become a passion he’s carrying through into a second career as an independent artist. Wilkes’ figurative pieces are now on display at Kansas City-area galleries such as Leawood Fine Art Gallery and NAME.

“I always keep an open mind,” he says. “I’ll always be learning. That’s the fun of it.”