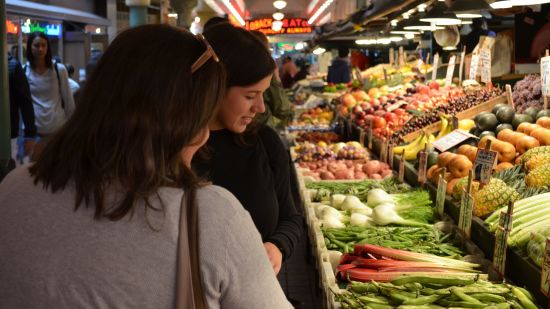 Recognizing a Midwest Sense of Community

WHERE YOU CAN SMELL SOMEONE'S MELON WITH NO SHAME

We don’t have an ocean or mountains and many people I’m sure wonder why we live in the Midwest, but I’ll tell you, it’s the people. You actually know your neighbors and if every third house doesn’t have a Chiefs flag or a large bbq smoker (and on occasion a decorative flag depicting the current season), you should probably consider moving!

And here in the heart of America, don’t forget to say hello to strangers on the sidewalks or trails— sometimes you will even hug a 70-year-old named Andy after you see him day to day on your walk. Listen, he gives me advice and we hug and bikes have to wiz around us, but we’re knee deep in talking about the ever increasing price of stamps. It’s important work out here on the trail, and someone has to do it.

If You Haven't Been Stopped in the Grocery Store

Also In the Midwest, everyone is genuinely concerned about you if you wave and they don’t wave back—but then the thought enters your head—maybe their dog died or maybe they’re sick. “I should pray for them.” Speaking of, the lady at the discount store I frequent prayed for me when I went to Rwanda a couple weeks ago and when I returned she said she was pleased I didn’t die like I thought I would. Of course I told her I was afraid to die, that’s just casual conversation at the checkout while she showed me the new shipment of the special weird gum I like.

The other day an older lady tapped me on the shoulders in the canned veggies section at the grocery store, “I forgot my readers. How much sodium is in this can of tomatoes?” And I was none too bothered to let her know it was 11 percent of her daily value, but what she really wanted to look at was the sugar content, “Good Lord! You’ll get diabetes.” She laughed, “I already got that!” Well then I laughed too and we just continued on our merry way.

All I’m saying is, if you haven’t been stopped in the grocery by someone asking if you think that cantaloupe is ripe because, “I can never tell”—and then you smell that melon for them with no shame, well then you’re going to need to evaluate your non-midwestern fruit section behaviors. We don’t need that kind of negativity in our lives.

Better Than the Bluest Waters

All that to say, Kansas City is community. When we lose, it’s “better luck next year!” and when we win, we all we win. We run to each others houses and spray champagne on the porch. Even the most hermitted of neighbors come out and gratuitously hug the passersby. People are in tears and we take the Chiefs flags off our homes and run in the streets. We pop fireworks illegally and honk tirelessly and scream out the windows. The next day we all wear red and school is canceled for the big parade and we tell stories, remarkably not about football as much, but about how nice Mahomes really is. “Levelheaded and kind, and a hell of an arm.”

And that is better than the highest peaks and the bluest waters. I will retract that statement in March when it snows for the 300th time, but for now, I believe KC is the best city in the whole world.

Hello! I'm Jami Nato and I'm married with 4 children that don't really look like me...but trust me, I did all the work. Jesus loving, Kansas City-based mama, funny girl. Into not doing laundry. www.jaminato.com
Read More In My Profile