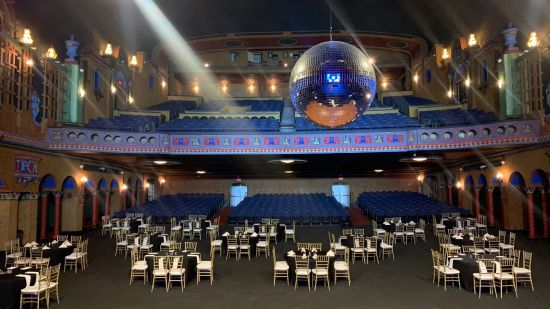 The Spirit at the Uptown Theater

There’s an energy from years past that echoes the generations before us. Some things are as obvious as Union Station. It’s easy to see where the trains picked up passengers and where war-time lovers kissed under the clock. You may have even touched the bullet holes that pierced the front of Union Station from the 1933 Kansas City Massacre.

Truman’s home is another sign of a time long ago. The Truman home is kept preserved in 1982, exactly the way Bess Truman left it before she passed away. President Truman’s hat, coat, and cane sit exactly where he last hung them before he passed away ten years prior to her.

History is all around us in Kansas City. Every kid from the 80s remembers the Oregon Trail started in Independence, Missouri. The Civil War was battled in Loose Park. The rise of crime families in the 20s made Kansas City “the wettest block in the world” during Prohibition.

If Kansas City history is all around us, maybe its souls are, too. The idea that those who have passed remain with us is not a new belief. Whether you chose to believe in ghosts is up to you unless, of course, the ghosts give you reason to believe. The Muehlebach Hotel is said to have “the blue lady” wandering around. Folly Theater has a mysterious male figure in a bowler hat and a woman seen running toward the stage. Students at Longview Community College report hearing hooves on pavement and catching glimpses of a woman on horseback. St. Mary’s Episcopal Church is home of the ghost of scorned Father Jardine. And we can’t forget about The Elms Hotel – strange, unexplained sights may make every hair on your body stand up.

Everyone in Kansas City knows these ghosts or at least has heard whispers about them.

There’s one ghost that keeps to himself. His name is George and he lives at the Uptown Theater. The Kansas City ghost tours have never stopped by. Professional ghost hunters have never been invited to use their instruments. George likes his (very much alive) “co-workers.” And his co-workers like him, too.

Uptown Theater is the home of concerts, weddings, and speakers – President Obama has spoken here, twice. Yes, the Secret Service took an ancient, unopened safe out of the building. That’s to be expected when a President of the United States speaks at a venue.

What is not expected is, well, Alia Johnson will tell you.

Alia Johnson is the Director of Events at Uptown Theater. Spend an hour with her and she’ll tell you about George. George is a name the staff gave him. No one knows who George is but rumor has it there was an explosion, possibly in the 30s, around the time the mob ran Kansas City. The explosion was not mob-related but an accidental gas explosion. An Italian man, a maintenance man, worked there at the time and he died in the blast. It may be the Italian man’s ghost. Or not. But George seems to be fond of his 21st century name.

George isn’t malicious. He’s not a ghost that scares anyone. “We like George. You get used to him. You kinda freak out about it at first but then you’re just like, ‘Meh. It’s just George,’” Johnson says.

George tends to make his presence known when the building is quiet with his co-workers.

Johnson has stories – many stories. Some stand out in a way you can’t prove one way or the other. “It’s just George,” employees of Uptown say.

“One time we had a menu tasting. It was me, another coordinator, and a bartender. Everyone left. I was locking up the kitchen and as I was locking, this shattering sound came from kitchen. It sounded like one of our metal shelves got knocked over. So we ran out. I got a police baton. The other coordinator got a brick. We came back in yelling, ‘Hey! The police are on their way! If you’re here, now’s the time to leave.’ I don’t know why we decided to investigate on our own. Once the kitchen is locked, if you’re in it – you’re locked in. There’s no way out. We unlocked kitchen, looked inside and nothing was out of place. The next day, we looked at video footage. We looked at the kitchen footage and there was nothing. All you see is us talking, hearing something, and then running out of the building and coming back inside like Charlie’s Angels or something. We open the door and we see nothing.”

“If you have an event where you need a spotlight, we have a separate room where the spotlight operator works. There are windows you can see from the stage where the spotlight comes from. The Def Tones were playing that night. I wanted a picture so I got in the barricades and I turned around and in the far window, in the spotlight room, there was a man in a round hat, smoking a cigar. I texted our tech and asked, 'who’s in the lighting booth? I didn’t think we had a spot tonight.' He’s replied, 'no one.' I said, 'there’s a man smoking a cigar and with a hat up there.' The tech went up there, unlocked the door and there was no one.”

“One night, the only people in the building were the chef, room captain, and myself. I was finishing up touches before a wedding. I heard a knocking and scratching behind a wall. I was being funny and I said ‘if you’re here, knock four times.’ And it knocked four times. I tip-toed to the kitchen and told everyone to watch. I pulled everyone out and I said again, ‘knock two times.’ And it knocked two times. We eventually left for the night. We brushed it off as a coincidence or maybe it was an animal that got into the walls or whatever. The next day, I looked up what was behind the wall. I thought the wall backed up to the encore. It doesn't. There’s actually eight feet cement there.”

“One night, we had a prom. We were setting up. Two weird things happened: I was on stage with the lighting technician along with a co-worker, Trudy. We hear this howling and a gust of wind goes by. We turned because the very heavy red curtains moved. A few seconds later, one of the tables that was fully set was flipped. All the screws came out. It flipped up on an incline. There’s no explanation for it. Later that night, I went up on the balcony to take pictures of the room. Later that night, I go home to look at the pictures and I’m like ‘what is that?!’ I zoom in and as Trudy is walking, George is right behind her. There’s no reflection it could have been. And it was only behind her.”

“It’s just George,” is a phrase the employees of the Uptown Theater say a lot, especially when the theater is mostly empty.

Bands have spent the night at the Uptown, especially after a late show followed by an early morning to pack up. George likes to turn the breakers off and blast lights at music at 3 am. Some bands come back. They even thank George at the end of their set, thanking him for allowing their performance to go smoothly.

The most common noises the employees hear are keys jingling. Cameras record balls of light chasing each other in the middle of the night. Things happen that don’t have an explanation.

And maybe that’s what George wants – recognition that he exists. Kansas City definitely has soul. But sometimes you may be lucky enough to run into the one soul that wants to hang out with his co-workers who say, “it’s just George.”