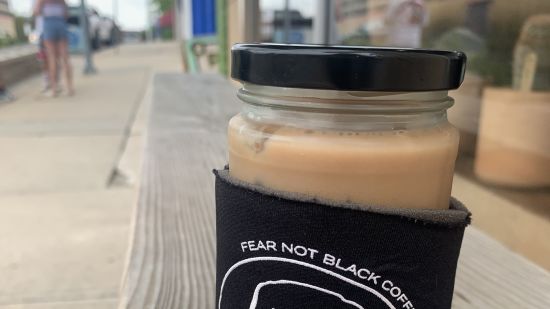 When I moved to Kansas City right after college, Westport quickly became our "hot spot" for Friday and Saturday nights — each weekend hopping from one bar to the next and ending the night in a heated debate on where to get food. After so many memories of spending late nights drinking in Westport, I completely forgot about the fun and quirky stores open during the day. I decided to spend an entire day in Westport to explore the ins and outs. What better person to join me on this quest than a close friend who spent many nights out in Westport with me. She also shared a similar outlook on Westport and was exciting to venture into places we had not been before.

The first stop on the tour was getting an iced chai latte at Oddly Correct coffee. I have had Oddly Correct in the past, but typically grabbing coffee to-go while making my way to another part of town. As I walked out of Oddly, I noticed the bright, blue store front of Modern Lily. Per their Facebook page, Modern Lily is a plant-inspired Art & Gift Shop. It primarily features art & designs by owner Megan QC Gallagher, as well as a variety of houseplants, planters, and other giftable items. The shops bright and vivid designs are unique from other home stores you often find.

From there we stopped in Mid Coast Modern, a boutique filled with goods made and designed by local KC artists. This store is a KC- enthusiast’s dream come true. I successfully only walked away with a few earrings as opposed to purchasing the entire store- which I was tempted to do. Other stores that I stopped into were Prydes, Bunker, Clothz Minded, and Reset KC.

Not only were the boutiques eye-opening, but I had forgotten all about the restaurant scene. One patio was busier than the next (while all keeping a safe COVID-friendly distance). I made mental (and physical notes in my phone) of the restaurants I have yet to try. The more stores I explored, the more I realized Westport doesn't have to just be where you grab drinks with friends, but a great location to support a variety of local spots.

Hi! My name is Sari. I am a KC native that loves supporting local business through food, shopping, and everything in between. I am constantly looking for new places I have never been and sharing my experiences. I am always looking for new suggestions and love recommendations of business to check out. When I am not exploring the city, I am a portrait photographer- photographing...
Read More In My Profile