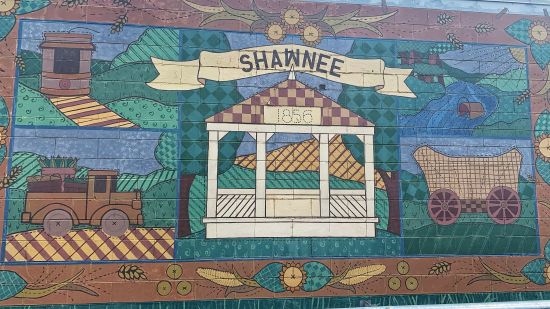 A DOWNTOWN EXPERIENCE WITH A SMALL TOWN FEEL

Over the past two years, Shawnee, Kansas has gone from practically unknown to a thriving downtown.

Along Johnson Drive and Neiman Road there has been an abundance of growth, with restaurants, breweries, and local shops popping up along downtown center. There's something for every experience: day dates, coffee and shopping with friends, family outings, date night, or drinks with coworkers to name a few. Pick and choose what works for you and your crew!

Saturdays give the most the options, as everything is generally open (and Mondays give the fewest - lots of businesses closed). Make sure to pack a mask - you'll need it to enter these wonderful establishments.

Pro Tip: Park at City Hall! It's a great, central starting point to reaching the downtown area and totally free. If that lot is full, there are several smaller lots on and around Johnson Drive.

McLain's has been a Kansas City staple since their bakery opened 75 years ago in Waldo. Shawnee is home to the newest market location, and sure to make your morning a little sweeter.

In a converted garage, the space features a patio complete with yard games, seating for all types of groups, a drive-thru, and full market menu (coffee and cocktails included). Be sure to pick up a McLain's passport and get a stamp here -- prizes include free coffee and cookies!

Stop by for breakfast and a coffee, or a pick up a box of their popular cup cookies to share (or for yourself - no judging here!).

Johnson Drive is home to several breweries, two of which are in Shawnee and walkable! Perfect for a mini brew crawl.

Shawnee's first microbrewery opened just shy of two years ago, and is bringing "beer that moves you" to the people.

You can't quite tell that the building is nearly 100 years old, unless of course you take a peak into the basement at the bar! Enjoy a couple brews with your group at the large gathering table, or sit in the cozy, lit alley room. While they have a variety of brews, some of their core beers include Car Hop (a cherry lime berlinner), Squires Stout (coffee stout, served in a mug), and the Passive Aggressive Post-It Notes (an American pale ale).

The space is dog and kid friendly, with a variety of board games. They also have a Taco Tuesday deal with Sancho's Streetside, Pretzel Wednesdays with KC Pretzel Boys, and a rotation of food trucks on the weekends.

The first brewery female-owned brewery in the area, Servaes and head-brewer Courtney made a huge impact with her unique and novelty beers.

Over the course of the first year, she set out with the goal to brew 100 different beers. She surpassed that by brewing 241 different beers (and that's just year one!). It's safe to say there's always something new to try when you visit the tap room.

Servaes specializes in sour beers and NEIPAs, especially those with uncommon. One of their popular series is the Distant Light, a rotating a sour series, with Rainbow Sherbet being a fan-favorite. Sundays are currently dedicated to Daiquiri Days, where they release a series of daiquiri-inspired flights.

In addition to beer, there is also a selection of Aaron's Craft Soda. Flavors rotate frequently, and are crafted by the head-brewer's son, truly making it a family affair.

Be sure to check their social for upcoming events and pairings!

A brief, ten minute walk west of Shawnee's City Hall will take you to Herman Laird Park. In a typical year, it's the site of the Old Shawnee Days, however there's still plenty of green space to enjoy. Grab a bite to eat from one of the surrounding restaurants and enjoy a picnic on the vast lawn. Or take your furry friend for a walk around the area. There's a playground for the kids to enjoy and a few tennis courts if that's your thing!

Around the corner from the park is Shawnee Town 1929. While currently undergoing some updates, visitors can get a glimpse as to what life was like in the 1920s. Learn about rural, farm life through tours (self-guided and guided) through historic buildings, gardens, and exploring the collection of artifacts. New additions will include local businesses that represent the time period. You check the website for specific hours and tours available!

I Heart Local is a one-stop-shop for all things Kansas City and local. This store front, run by the family behind Good Vibes Metal (another local, Shawnee-based business) features items and goods from more than 20 local makers.

Vendors come from all across the metro, with everything from clothing and jewelry, to prints and decor, to locally crafted food items. It's a perfect stop for finding gifts for the KC Chiefs fan, the new parents, new home owners, or just anyone who loves Kansas City!

Any of the metal work seen in the shop and online can be customized to your liking too. This includes engravings, colors, and finishes, so you can create your perfect piece while supporting local!

If you aren't comfortable shopping in stores, you can shop the vendors on their website.

Tucked along Johnson Drive is Aunt Jean's Cup and Cone, and the perfect way to end a day in downtown Shawnee. Aunt Jean's has been under new management for a little over a year, and since then they have been crafting some delicious and unique gelato flavors. While there aren't an abundance of options, there's enough variety that everyone will find something of interest. Popular flavors of late include cinnamon chip, cage-free unicorn, and tiger king (a blend of chocolate and peanut butter).

For those who are dairy free, there's a selection of sorbets that rotate, including watermelon and lemon-basil. Of late, they've also begun experimenting with boozy flavors, such as sangria and whiskey tango (Jim Beam, vanilla, and cinnamon). The menu also include local drinks featuring the Roasterie Coffee and Tea-Biotics Kombucha.

Don't miss a photo opportunity on the west side of the building - when it's not under construction of course!

For all my foodies, other restaurants within walking distance include: Sancho's Streetside, Old Shawnee Pizza, and Sushi Mido. For those loving the nightlife, Drastic Measures is a speakeasy offering a variety of craft cocktails (and only craft cocktails).

It's easy to spend a day shopping, eating, and drinking through Shawnee's local businesses - so escape for Shawnee for a new adventure!