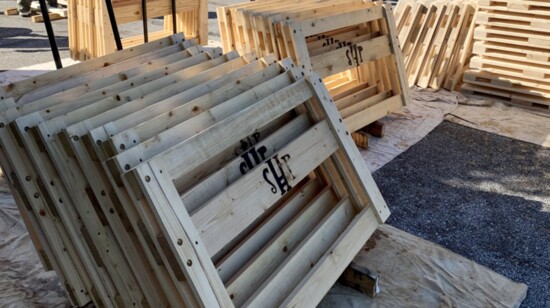 Photography by Will Patterson

In early 2018, Scott Foster spotted a show on Facebook that would change the lives of hundreds of kids in Jackson County.

The program was ‘Returning the Favor,’ and this particular episode featured a small nonprofit called Sleep in Heavenly Peace. Before Foster knew it, he was heading to Twin Falls, Idaho for training to start his own SHP chapter.

Armed with the knowledge Scott, his wife Lisa and some volunteers acquired in Idaho, they manufactured their first bed in June of 2018. 1,600 beds later the Fosters and their team continue their quest that “no kid sleeps on the floor in our town.”

“Kids have little control of their situation,” Scott Foster said, adding that any child age 3-17 is eligible for a free bed if they don’t have one. “No financial requirements or red tape.” The Kansas City SHP chapter has about 200 kids on a waiting list.

Approximately 60-100 volunteers gather during the bed-making process, each working a station, constructing 40 beds in a morning. His team has five builds scheduled between February and April. “Most Saturday mornings, we’re either building beds or delivering them,” he said.

“They’re pretty much spoken for the second they’re built,” he said, adding that they partner with around 30 nonprofits and agencies to place beds everywhere from domestic violence shelters and refugee groups to foster/adoption and other organizations. An employee of a local utility company, Scott said he often sees firsthand the need for beds.

Scott and team know that when children and teens get sleep, they can excel. “If kids don’t sleep all night, they have a hard time being successful.” He said teachers will often reach out to request beds. “They see some of these kids struggle; when it affects their behavior, they have a hard time concentrating and making friends.”

Each donation from Sleep in Heavenly Peace includes a bed, new mattress, new pillow and new bedding. “When we leave, the bed is ready for that child to crawl into,” Scott said, adding, “often times the kids are staring out the window waiting for us.” He and his team have gotten lots of hugs and seen a few tears over the years.

They don’t do it alone; they have a large list of dedicated volunteers and community business partners, like Flooring and More in Lee’s Summit, which donates warehouse space to store materials and build the beds.

Foster recently received a 2022 Mayor’s Character Breakfast award for ‘Cooperation.’ “They put my name on the award, but it’s not me. It’s so much bigger. We have a team of volunteers who help, along with corporate sponsors and donors. I’m a facilitator: I find the money, the materials, and the people to make it happen.”