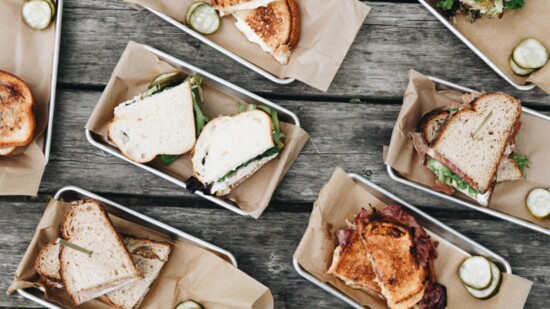 From Soil to Sheep’s Milk

On 150 idyllic acres of pasture north of Weston lies one of Kansas City’s best-kept, most unique culinary secrets. Green Dirt Farm is a cheese lover’s dream, producing small-batch, artisanal creations from the milk of their grass-fed flock of sheep.

GDF founder Sarah Hoffmann purchased the farm in 2002, and began producing some of the country’s most delicious, wholesome cheeses starting in 2006. Since then, the humane, environmentally sustainable sheep dairy has taken the cheese world by storm, winning its first blue ribbon at the American Cheese Society annual competition in 2009 and bringing in more than 80 awards in prestigious cheese and artisan food competitions since.

Sarah, along with her daughter and lead shepherdess Eliza and the rest of GDF team take great pride in the well-being of their animals, believing that sustainability and animal welfare directly contribute to the quality of their cheeses. The flock of more than 200 sheep, including approximately 80 milking ewes at any given time, are raised on diverse grass pastures, providing their products with a wider array of flavor compounds in their milk.

Four miles south of the farm, just outside of Weston’s historic commercial district, the Green Dirt Farm Creamery offers the town’s visitors a chance to sample some of their award-winning products. Since opening its doors in 2016, the retail shop and tasting room has offered all of GDF’s signature sheep cheeses, mixed milk artisan cheeses and cow’s milk ice cream, plus expertly curated charcuterie boards, local beer and wine, and other wonderful foods and crafts from the area’s small-batch makers.

If you’re hungry for a classic, look no further than their Cuban sandwich, which is comprised of GDF Aux Arcs cheese (a blended cow and sheep milk cheese similar to Gouda or Gruyere cheese, pronounced “Ozark”) with smoked ham, pickled red onions, dill pickles and spicy mustard aioli on sourdough bread. For kids (or the kid at heart), their “Woolly One” is a grilled cheese made with their Woolly Rind (a Camembert-style blend of sheep's milk and cow's milk cheese) and Aux Arcs cheeses. And of course, if you’re feeling indecisive, you can always try them all on a cheese or charcuterie board.

While some of GDF’s cheeses can best be described as adventurous or even funky, their commitment to their craft and expanding range of products, including blended milk cheese, truly offer something for the whole family. In fact, you’ve likely seen their products in your favorite grocery store – GDF’s fresh, sheep’s milk cheese is a delicate curd that can be spread onto your favorite sandwich or crumbled on top of your favorite pasta, pizzas and salads.

For the more serious foodies, the GDF Farm Table Dinners should be at the top of your bucket list. This ongoing chef’s dinner series featuring some of the region’s most celebrated culinary talents, offering guests with Kansas City’s most unique, delicious and creative culinary destination.

Ultimately, Sarah Hoffman and the GDF team aren’t doing anything particularly innovative. Humans collectively have the rich history and tradition of shepherding and cheesemaking, having raised sheep for their milk for millennia. But Green Dirt Farm has brought the art of cheesemaking to our own backyard, and they have the hardware to prove that their products are delicious. And while it’s easy to take the experts’ word for it, it might just be worth your while to make the quick drive up to Weston to try it for yourself.