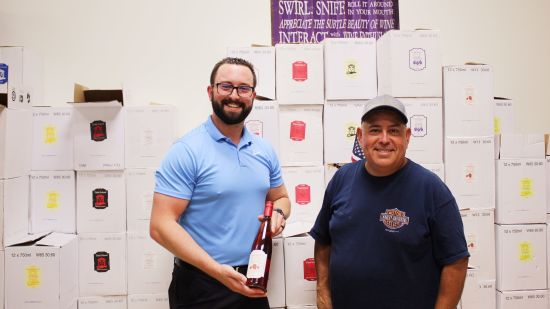 I try to think of myself as a “glass half full” sort of guy. One of the positive things I noticed during the pandemic was the spotlight that got put on local businesses. One of which I’ve been happy to patron for years, Tidal School Wines. Now, I originally just knew this wine from a local farmers market in my hometown, and one wine quickly became my wife’s favorite. From there the search was on. Birthdays, weekends, holidays, and anniversaries became a quest to find this find all over town, which proved itself challenging. However, being the dutiful husband I am I decided to reach out to the owner which in turn led us to a wonderful working relationship. Upon further investigation, I learned the history of this company is quite rich and, well; sweet.

Tidal School was just that, an actual old school that John D. Rockefeller had built for refinery families in Drumright, Oklahoma. This was during the time that Oklahoma became an oil state and a wave of prosperity ran through it. After sitting vacant and becoming a community center for many years, it was converted into a winery in 2002. After a partnership was created and ended, the brand and the ownership of Tidal School Wines is now in the hands of Jack Carlson. Jack is a straight shooter who not only puts his heart and soul into his company, but also works full time as a mechanic at American Airlines and was a US marine for close to a decade. Jack is a second-generation immigrant with his family coming from Chihuahua, Mexico. Jack’s mother also shared his passion of good food, great drinks, and family. Jack quite literally poured himself into this business and you can feel that just by talking to him. He truly encompasses the American dream.

It’s easy to say you want to support local businesses but somehow, venturing into the space where the wine is blended, bottled and labeled makes you feel like so much more a part of the process. My wife and I made our way over there recently. They work out of a small industrial park in Broken Arrow around 91st and Aspen behind Whisky Dogs. It’s a small, modest unit that’s filled to the brim with passion, ideas and oh, delicious wine. Jack and his new advertising manager, Angela, have been chasing down every avenue in order to find a way to share this wine with the local community. Being a lover of all things local, delicious, and creative, I knew I wanted to be a part of it.

Every single one of Tidal School’s Wines are delicious in their own way. They have an entire spectrum that ranges from a sweet, bubbly Moscato all the way to a crisp, clean Chardonnay, as well as everything in between. Also, there’s not way too many choices where one could feel overwhelmed and not know how to choose. (Also keep an eye out for MoodyFoodieTulsa’s Weekly Wine Pairing for a full review of each wine as well as a couple items that pair well with it). You can track them down at most local farmer’s markets or just give them a call and they’ll squeeze you in for a private tasting to let you see personally what your favorite might be.

I know. It’s easy to run through Wal-Mart or QT and grab any old bottle of wine that’s a familiar name to you. It’s $5.00-$9.00, already chilled and you don’t have to stop anywhere else. However, I’d like you to think. Think when you were in your house in the middle of pandemic, trying to get online to file your unemployment, trying to work in a house full of children from a laptop hoping you’d make it to the next paycheck or maybe even having to venture out to work as an essential employee. Jack and Angela were there too. They felt that impact. Jack has reached into his own pockets to help keep this company afloat simply because of his passion and drive for this product.

These are the people that deserve our support. These are the people who deserve paying a slightly higher price point because you know you’re getting a top-tier product that’s locally owned and operated and helping support part of the community that supported us during this hard time.

So keep an eye out for our upcoming reviews, see what type of wine looks like it may work for your next event. Give Jack a call and let him help make your next date night, birthday, anniversary special, as he has mine for the last couple years. Even if you’re planning an event as special as your wedding, let them know and they can absolutely make your drinks a breathtaking array. Lastly, stop by the a local food truck lineup and grab one of his famous Sangria Wine Slushies and smile knowing that you are personally taking part in Tidal School Wines and the Broken Arrow/Tulsa community we all know and love.

My name is Bryan Edwards. I’m a 26-year-old husband and father born and raised in small-town Coweta, a little outside the Tulsa area. I have a big, southern family that revolved around the kitchen. Every celebration, holiday, and everyday school nights were spent in the kitchen talking, doing homework and of course, cooking. Since it was always around, I never appreciated the...
Read More In My Profile