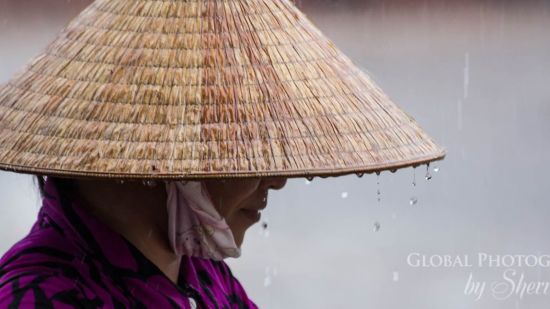 Visit Vietnam in the Rainy Season

PUT ON YOUR PONCHO + EXPERIENCE IT LIKE A LOCAL

It arrives in Vietnam with a vengeance; the rainy season. No rain for months and then it just starts; daily downpours that relieve you from the heat and make you run for cover. Most people hear the words “Vietnam rainy season” and immediately start looking at other vacation alternatives. But I say embrace the rainy season, traveling in rainy season is one of my best-kept travel secrets and I always wonder if I should tell people what they are missing when they skip countries or locations due to a less than desirable weather season, or keep the secret to myself.

I’ve decided to share the joys of traveling in rainy season and because honestly most of you won’t listen anyway. Most people are scared of rain and think it will ruin their vacation. But for those of you who are after an authentic travel experience and exposure to local culture, then going to Vietnam in rainy season will be a delight!  I lived as an ex-pat in Vietnam for a year and was exposed to the whole array of weather it dished out.

“It was as if they turned on a faucet. One day it started raining, and it didn’t quit for four months. We been through every kind of rain there is. Little bitty stingin’ rain… and big ol’ fat rain. Rain that flew in sideways. And sometimes rain even seemed to come straight up from underneath.” —Forest Gump

Years ago as I watched the movie Forest Gump, but I really had no idea I would actually be living there in my future experiencing the big ol’ fat rain first hand.

When is Vietnam Rainy Season?

In southern Vietnam rainy season runs roughly from April to September/October with June, July, and August being the rainiest months typically. And when I say rainy I’m talking 11 inches of rain a month on average – more than some places get in an entire year!

From November to April, the north is cool and dry, while May to October is hot and rainy. The biggest difference between the north and south is that the temperature varies more in the north and actually gets cool in Dec/Jan/Feb down into the 60’s F. Where southern Vietnam is always hot and humid year around.

But here’s the important thing to keep in mind – rainy season doesn’t mean a constant deluge of rain all the time every day. In fact, I actually like rainy season when I lived there because it simply meant that it rained every day for an hour or so in the afternoon (sometimes really heavy downpours that caused street flooding), and then it stopped and the rest of the afternoon/evening was lovely. Everything was sort of cleaned up and cooled down.

Why Travel in Rainy Season?

From a cultural experience and photography standpoint, inclement weather seasons are wonderful opportunities to see how the locals really live in situations that we would deem less desirable. You get a true feel for the country and local culture and traditions through the ‘tough’ times.

Not only will you be in awe of how they get around in the rain, but you’ll also be amused by the various forms of ponchos people use in the rain. You think a poncho is just a poncho; not in Vietnam. You’ve got your regular poncho, a poncho with a plastic ‘window’ for your motorbike light, and my personal favorite – the two-headed poncho. You’ll also be amazed at just how many people can fit under a poncho while on a motorbike.

After observing Vietnamese people and culture I’ve come to the conclusion that the people there are resilient beyond belief. Granted, we learned this during the war. However, many of us (including myself) have little knowledge of the Vietnam War beyond movies like Forest Gump. Therefore actually being here observing the Vietnamese and how they carry on their day to day lives is absolutely fascinating. Quite honestly they make every other culture I’ve been in look like complete wimps.

When I lived in Minnesota I used to think that Minnesotans were tough because they had to deal with such a long, cold winter. Then when I moved to NYC I realized the tougher people were New Yorkers. Unlike Minnesotans, New Yorkers don’t have cars, so we were forced to be exposed to the elements every day on our walk to the subway or to simply get groceries. Minnesotans could stay in their cars and have some protection, but New Yorkers had to walk in the rain/snow/sleet to get to their destination. In fact, I’m not ashamed to admit there were at least two times I simply gave up trying to get to work amidst a HUGE downpour in Manhattan. The subways were flooded and I was left dripping wet. I actually called in sick instead of going to work as a drowned rat – the rain had won and I went home in tears (ok, maybe the tears were a combination of the rain, PMS, and me not liking my job…but the rain was definitely a factor!)

In Vietnam when it starts to rain, they pull over on their motorbike, put on their cool rain poncho, and get back on and keep going. No one complains, no tears, no one stops what they are doing and changes their plans; they just keep going. They appear to have no reaction to the discomfort. Eighty-five percent of the Vietnamese don’t have a car, so there is no protection from the rain. There’s no escaping it, no calling in sick, and no working from home. They often commute in some of the worst traffic I’ve seen, for 45 min to an hour to get to their work, yet no one complains. Sure, maybe I just don’t hear them complain because they are speaking Vietnamese; however, the business people who I knew that spoke English never complained about their long commute or the rain. It’s just not in their culture to complain about such silly things they can do nothing about.

Rain doesn’t stop them – and it shouldn’t stop you.

A downpour in Ho Chi Minh City - it's easier to just take off your shoes!

Keeping dry under a poncho

The famous Vietnamese hats are also great for rain protection!

Once after a particularly large downpour in Ho Chi Minh City, I was greeted by one person who was happy the rainy season had begun. At my front door was a huge frog the size of a garden gnome. He seemed at peace with the wet conditions – so much so he didn’t want to move. I had to try to ‘shoo’ him away with my motorbike ramp hoping that he didn’t hop into my apartment. I’m sure my Vietnamese neighbors were watching me wondering what on earth the crazy western girl was doing again. They were probably wondering why I didn’t capture it, and fry it up for dinner.

Don’t let a frog or a rainy season stop you, go and experience the culture in any season in Vietnam!

After living in Vietnam, I learned that “life is like a box of chocolates, you never know what you are going to get (on your doorstep).”

I am a long-term traveler, blogger, and photographer with one goal in mind - to make you wish you were somewhere else. I've been writing about my travel lifestyle and around the world adventures on Ottsworld.com and sharing it on my social media channels since 2006. In my 11 years of living nomadically I've circled the globe multiple times visiting all 7 continents. I...
Read More In My Profile