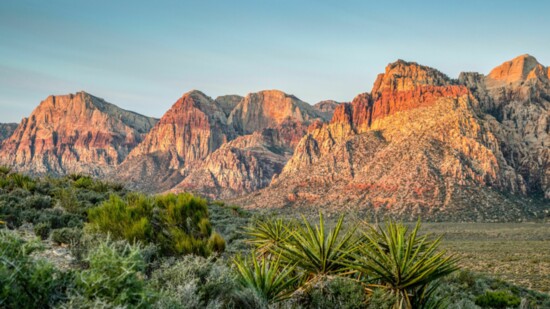 Once Upon a Community

A new community of private residential lots and public gathering spaces is on tap for the former Bonnie Springs Ranch site, and developers are anticipating construction on land improvements starting by the end of 2020. The Ranch at Red Rock will span 65 acres of private land within the Red Rock Canyon National Conservation Area, located 15 miles west of Las Vegas.

The public area will cater to homeowners and visitors and will feature two restaurants, an event barn, amphitheater and boutique hotel.

“The event barn is probably the first thing that will be constructed since it’s in demand,” said Joel Laub, developer of The Ranch at Red Rock and owner of CSR Development. The space will host weddings, corporate events, gatherings and more. “There’s a pent-up demand for a restaurant in the canyon since there are no nearby services, so we expect one of the restaurants will be the second structure built.”

Plans call for a farm-to-table fine dining restaurant and a casual restaurant. The amphitheater will present small music events, and the boutique hotel will feature a spa, Laub added.

According to Randall Jones, project partner and real estate attorney, the amenities will fill a void for services in the area.

“There really are no services in the canyon right now, so this will be the only place,” Jones said.

“The restaurants will cater to families who want to come up to have a bite to eat and to cyclists on their route up to the canyon. If you want to have a really nice dinner, it will be a way to get out of town without having to go too far.”

Jones and Laub have a long history of exploring Red Rock Canyon. The native Las Vegans and long-time friends grew up hiking the canyon and developed a strong appreciation for the land. After they discovered the Bonnie Springs Ranch property was for sale, they teamed up to purchase the site.

“Honoring the land is a very important process in this journey,”

Jones said. “I’ve hiked virtually every canyon with Joel. We have a commitment to be sensitive to the environment because we live here and we want to do this in a way that will be as sensitive as possible to this conservation area.”

The developers are consulting with botanists, naturalists, horticulturalists, landscape architects, Clark County staff and the Bureau of Land Management to ensure sustainable practices will be put in place to allow the natural habitat to thrive.

“The community is in the flyway for the monarch butterflies so we are talking about having milkweed for them to eat,” Jones said.

According to Laub, chairman of the board of trustees for The Nature Conservancy Nevada chapter, lots will be released to home buyers in their raw form with the natural plant life in-tact. The Nature Conservancy is a global conservation organization dedicated to conserving the lands and waters on which all life depends.

“We will put in roads, walking paths, bridle fences, and a creek and pond system,” Laub said. “We want to make the community look as natural as possible, like it’s always been there. We’ll use natural materials and colors to blend into the landscape and be complementary to the canyon.”

The Ranch at Red Rock will cater to those that want to live in an exclusive eco-conscious community away from the heart of the city, according to Laub.

Five of the 20 designated lots have been sold, and five will be released for sale in early 2021, Laub said. Lots range from two to four acres in size and start at $4.5 million. Lots are listed through Kristen Routh-Silberman, a Las Vegas Realtor® at Synergy Sotheby’s International Realty.

“What you have here is basically an island sitting in the middle of a national conservation area in a state park,” Laub said. “You won’t be affected by noise. You’re 1,500 feet higher in elevation than Las Vegas so it’s a little cooler, and since it’s next to the mountains, the afternoons are shaded in the summer. You’re 15 minutes from a grocery store and 25 minutes from The Strip.”

Residents will access their home via a private drive and be greeted by a guard gate. Laub said construction could start on the first homes by late 2021.

An architectural design committee will work with homeowners on the design of their home.

“The design will be a collaboration between the committee and the homeowner, and we have a variety of style guidelines such as French country, Italian country, Mediterranean and a canyon contemporary with natural materials and colors,” Laub said. “The overall look and feel of the Ranch at Red Rock will be very traditional.”

Interest from potential homebuyers has come from out-of-state and local residents, according to Jones.

“I think based on what I’ve seen the timing is really good because there are a lot of people looking for something unique and different where they can have a little space,” Jones said. “It’s a very exclusive project that will give people one other option to look at and consider for a really beautiful home.”