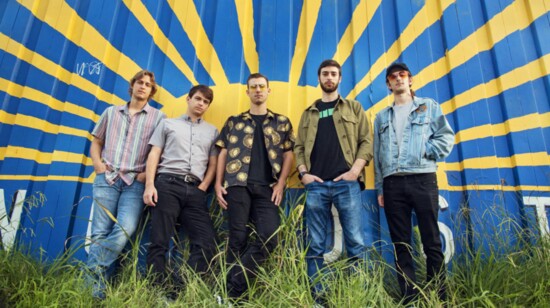 SGC: You all grew up in Johns Creek and often go back to visit family and play shows. How did you guys meet and when did you start playing together?

Trae: Four out of the five members graduated from Johns Creek High School. We all had met and were familiar with each other but it wasn’t until I began trying to organize jam sessions involving Chris (lead guitar, vocals) and Paxton (lead vocals, guitar) in 2015. At the time we all played guitar and sought to bring in a bass player and a drummer. A couple months of searching lead us to a stroke of luck by finding current drummer, Jack Lloyd. Soon after, playing shows became the lifeblood of our group and we were able to see the growth in our local following. By the time Seth Radman (saxophone) joined the band we had initially asked him to join us on stage at the main stage of The Georgia Theater along with Chad Mason (keyboards/organ). Seth was a friend from Johns Creek  but has seen great success in his own career path since graduating JCHS and college. He has helped transcend our sound whether it be ripping a classic solo at the end of “Bad Feeling” or blasting a powerful arrangement in “Where Did I Leave My Soul?”

SGC: What are your goals for ramping up this summer?

Trae: Currently we have our first official album in the works which should probably have around 9 to 10 songs. This year, our focus is primarily on finishing up the recordings at our home-built studio in Johns Creek, and starting to resume live shows. Aside from recording the bass and drums, all other instruments and sounds are produced in the basement of Paxton’s house. There is a very comfortable feeling when recording there so we often use that spot as our HQ when meeting in person. Our latest release is “Melancholy Madness”, a somber acoustic song written about the struggles and tough times we have experienced since the beginning of the global pandemic. This release is accompanied by a music video filmed and produced in Johns Creek, available on our YouTube channel. Our second goal starting this summer is to finally resume live shows. We are so excited to be back on stage and see everyone. We will release gig dates very soon! Follow us on Instagram or Facebook to stay in the loop.