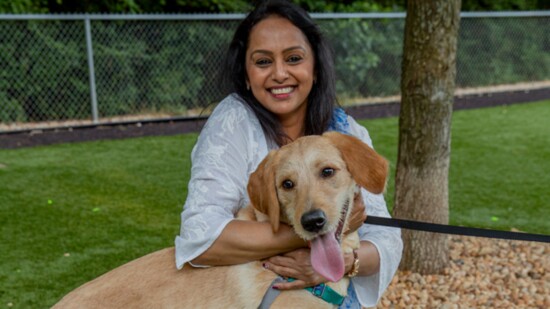 Pets and Their People

My husband and I adopted Mayla Jayne from American Coonhound Rescue Group. We had been waiting months for the perfect dog to become available and, to our Christmas surprise, we adopted her on Christmas Eve of 2016. She is an English American coonhound and has been a perfect addition to our family. She is such a sweet and loving girl that definitely should have been a mother. She absolutely adores children and has shown the ropes to our youngest pup. Her loving heart & hound howl could never be replaced.

When our pit bull, Tank, passed away after being a part of my husband's family for 10 years (and mine for 5 years), I really thought we needed another puppy.  We had been so heartbroken to lose Tank and our house was so quiet. I wanted another dog to meet me at the back door every day and be excited to see me!  So, I started looking for a dog at rescue organizations and eventually identified FurKids Atlanta as a great place to go meet puppies and see if we could find a new family member. We interviewed about six dogs in one day and we fell in love with "Destin", the name they had given him when he entered the shelter.  We decided to go ahead with the adoption and I picked him up the next week after he was neutered. We named him Waylon Bouche' Smith after Waylon Jennings and Bobby Bouche' (Adam Sandler's character in "The Waterboy").  He's a Catahoula Leopard Cur mix, which is why we chose Bouche' as his middle name - both hail from Louisiana! He's a high-strung boy, but he is so expressive and he's such a fun dog. I cannot imagine not having him to come home to every day! I'm so glad he's our good boy.

﻿I met Mocha on a very spontaneous Sunday when my daughter and I needed our puppy fix. When we headed over to the Humane Society, we were just going to pet and give love to the pups... or so we said! Needless to say, after hours of holding her and deliberating, we took Mocha home! She is the sweetest, but also the most challenging dog I’ve ever owned because of her fear of bicycles, scooters, skateboards and most anything with wheels. She is the best companion to snuggle up with and she's a great guard dog for our house. Mocha’s favorite thing is sunning herself on the deck on a lounge chair, like a movie star. She has a very soft, shiny coat which makes for beautiful photos!

After losing two of our Weimaraners within a few weeks, we were left with only one of our original four Weims. Seeing how this event changed not only us, but also Duke, the last of the four, we decided that we needed to bring in a playmate. We adopted Mattie through Weimaraner Rescue of the South. She’s small for a Weim, but has the sweetest personality that warms the heart. She’s never met a treat that she didn’t like. She just wants to be loved and that’s what makes her so special.

Tucker is an 11-month-old Dudley Labrador retriever. We rescued Tucker at seven months from a family that could no longer take care of him. Our Lab, Lola, passed suddenly last year and Tucker has really filled her paws in our family.  Like most Lab puppies, he is full of energy and a bit of naughtiness, but he is so sweet and full of love and has the most beautiful eyes that melt your heart. His favorite activities are chewing his bones, swimming and playing fetch. We are so blessed to have him as the center of our family.

We met Toffee on the PuppySpot website for the first time. We were immediately in love with his cute little paws, sparkling eyes and adorable ears. He was nine weeks old then. We wanted to take him home right away, but we had to wait till he was 12 weeks old to bring him home. We were all counting weeks and days for him to come home. Finally, the day arrived. We were so thrilled. He was the cutest thing we had ever seen. He was family now: Toffee Ariyakula. Toffee is a golden color labradoodle, more of a Lab than a Doodle. We couldn't stop gushing over his handsome looks. He was adorable. Pets are a great blessing in anyone's life. Toffee showed us what unconditional love meant. He offered us everything he had without asking for anything in return. He certainly taught us to be better human beings and more compassionate towards animals and humans in general. A man's best friend! We can't imagine our lives without him now!