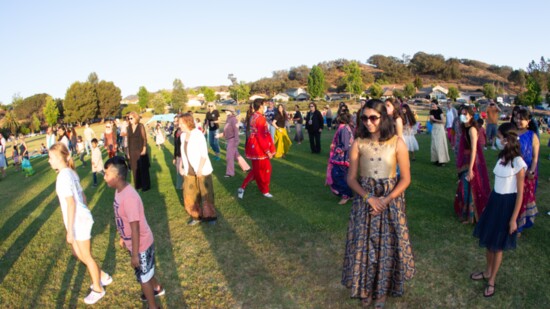 “If you give people the space to come up with new and creative ways to do things, they do!” noted Jonathan Serret of the Bank of America Performing Arts Center during the Second Annual State of the Performing Arts Zoom conference, hosted by Niki Richardson, associate director of TOArts.

When the pandemic shut down our community, performers and arts organizations scrambled to find new ways of being. Rather than cease to exist, the arts evolved and adapted with the times.

Dancing in the dirt, on basketball courts, poolside and at the ocean, Pacific Festival Ballet dancers were willing to do anything to practice their craft, says PFB’s Artistic Director and Founder Kim Maselli. As theaters were closed, “we expanded our horizons. … It became our new thumbprint” to go out in the community and dance wherever we could, notes Maselli.

During the pandemic, PFB dancers presented an Olympics tribute (shared in the meeting) featuring outdoor ballet performances throughout the community in a heartfelt display of dedication, talent and love of dance.

“It was remarkable for all the dancers,” says Maselli, adding that “we found people in our organization who were editors, knew special effects, filmmakers and we launched a whole new platform.” PFB also created and performed a full-length outdoor ballet, “A Holiday Angel” in place of the traditional “Nutcracker” performance when theatres were closed during the holidays.

PFB’s efforts to keep the arts alive are shared by a multitude of local arts organizations who know firsthand the vital role the arts play in the community. Reflecting on the challenges of the past year, they shared about the “silver linings” of lessons learned and the things that kept them up at night during the past year and a half… and counting.

Despite the countless sleepless nights fueled by his efforts to keep current with the “constantly changing COVID regulations,” Conejo Recreation and Park District’s Cultural Programs Supervisor Scott Buchanan points to the bright side of the pandemic.

“We not only went outside the box, we built boxes, we stuck kids inside boxes outside, and filmed them… if anyone needs the use of a Black Magic 8 television studio, we now own one!” says Buchanan, who oversees operations at the Hillcrest Center for the Arts. “We’ve managed to keep things going and we’re looking forward to getting back to normal,” he says.

SciartRUs’s Dr. Ranjini Ramachander agrees that the pandemic “made us think outside the box,” noting that the organization featured artists from around the world in cross-county concerts and online collaborations that they intend to continue to offer in addition to live performances.

The pause on performances allowed 5-Star Theatricals Cindy Murray the opportunity to “learn a lot about the business that I didn’t know and a chance to see what else 5-Star could do in the community other than putting on musicals on stage,” notes Murray, adding that “We kept busy,” presenting five car concerts, a park concert, a virtual fundraiser and a musical theatre community competition, plus summer classes.

“We are excited about the new season that starts in October,” says Murray. “Mamma Mia” opens October 15 and runs through October 24.

Pacific Festival Ballet’s Kim Maselli said the pandemic presented a silver living in the form of a unique opportunity for dancers. As the economy shut down due to Covid, many PFB alumni returned home to the area.

“…they really had no place to go, other than their kitchens and living rooms, and we had a 10,000-square-foot facility that was sitting empty for months on end, so we had artists and alumni from Broadway, New York City Ballet, San Francisco Ballet, Kansas City Ballet, Cleveland, and from all across the country home—I found it a beautiful thing to let them one at a time in the studio to work out,” says Maselli. “They found a second home in the studio; it became a safe haven for these artists to connect with their craft and connect with their dance community; it was nice to bring everybody back in.”

And while paying the rent proved challenging, she notes that compassionate landlords, PPP loans and fundraising efforts, plus tremendous community support, “really helped us along the way.”

For Conejo Valley Youth Orchestra’s Alex Tseitlin, “The thought of the missed opportunities for students really kept me up at night,” but thankfully, “we found ways to mitigate that” and placed a “renewed focus on what’s really important. … We are strong as an organization, and we are looking forward to the coming year.”

“We have become a media company … learning stuff like how to write a script, how to market,” she says, adding that after the learning curve of the past 18 months, now, “I can probably teach a course on it!” New West Symphony has continued teaching online and the new format has allowed instructors to really get to know students and their families—"you get to see the person as a whole” when they “show up” for a lesson from their home.

Staneva says the organization is grateful for community support, but she worries about bridging the gap in support if experts’ predictions that it will take two years to reach full capacity prove true.

“Will the community support us? Will we be able to meet that gap?” she wonders.

“We feel blessed and we are very well supported by our constituents,” says Graham, who is hopeful the organization will “return to our past normal,” including holding three concerts annually. During the pandemic, says Graham, soloists performed pieces and filmed them in their homes and put them on their website for the public. The future is “an unknown for us; we may have parents in the audience and that’s it,” he says.

The key to thriving in the future, says Beverly Ward of Ventura’s Rubicon Theatre, lies in being “able to be flexible and nimble and fearless—I see how that helped us survive and I’m certain it’s true of every other arts organization in the world that survived the pandemic: that willingness to be imaginative helped us to survive,” says Ward. “We all learned so much,” she added, and “we can’t wait to get back in the building!”

Ward credits the community with supporting the theatre’s efforts and looks to the government to help fund arts programs in the coming years.

“The pandemic exposed how vulnerable we are as arts organizations and the pandemic heightened that when we get government support, it makes a difference,” says Ward. “We [the arts] are a huge economic driver; I want to see the new normal being a future where we make certain we’re working with Americans for the Arts and to continue to get support to weather the storms… this will not be the last; there will be another crisis.”

Ventura Music Festival’s Susan Scott discussed the challenges presented by a lack of venues available for performances due to the pandemic. Still, “We’re hopeful,” says Scott, noting that VMF plans to present scaled down concerts in Oxnard for 100% vaccinated guests.

“We’re looking forward to the fall and wondering what’s coming next!”

Looking at the larger role of the arts in society, New West’s Staneva notes that “arts organizations are all talking right now about diversity, equity, inclusion… We created ‘Global Sounds, Local Cultures,’ almost 16 months ago, and we basically used our artistic voice to contribute to the national dialogue on the topic. … We had a tour of Japan, a tour of India, Iran, China, and America the Melting Pot,” she says. These livestream performances with artist activists and trailblazers represented a “huge breakthrough--our tour of Iran was watched in 66 countries! That’s beyond T.O., that’s beyond Ventura County. We see our role as telling the story, telling about important events in our society, in our community.

“We were relevant, and we found our voice,” Staneva adds. “We’re thinking about ‘what is our mark?’ We don’t have all the answers, but we definitely have a lot of questions.”

Helping to ease the transition from virtual to in-person performances is a big focus for the Conejo Valley Youth Orchestra, says Tseitlin.

“A major goal is rebuilding the confidence of our members and audience,” he says, noting, the organization is “moving forward with consideration and care” while also maintaining their new livestream presence that allows for online fundraising and sharing concerts and performances with family and friends around the world.

As organizations prepare for increased in-person performances, while continuing to offer an online presence to expand their reach, they emphasize that audience participation is essential to their success.

“The community supported us; they held ‘Mamma Mia’ tickets since 2020,” says Murray of 5-Star Theatricals. “We wouldn’t be here if it weren’t for our resilience and our community.”

Commending the arts groups for the passion they bring to providing arts, culture and education to the community, BAPAC’s John Serret encourages the public to show their support whenever possible.

“The arts do matter, and they matter a lot,” he says. “Support them. Buy two tickets and bring a friend. The arts have a significant impact on our lives and on our economy.”

Local performers are also passionate about getting back on stage, says Murray.

“When we did our virtual concerts, one of the performers broke down crying because she hasn’t sung for a year and a half—these creative people cannot wait to get back on stage! Please come to all of our events!” Murray urges.

Optimistic about the future, PFB’s Kim Maselli believes audiences are ready to fully embrace the arts.

“There is a magic in the air like when the Civic Arts Plaza first opened—there was such a hunger for it,” says Maselli. “Now I feel a resurgence, an excitement in our community and a feeling of joy and excitement each time the curtain goes up—I can’t wait!”