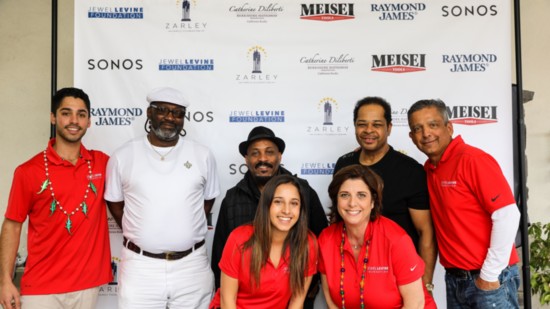 A Community Jewel & a Treasure for Families in Need

The value of community cannot be overstated. It is the social fabric we wrap ourselves in, particularly during times of personal or shared crisis. In such moments, when resources are stretched and the need for emotional support is acute, knowing someone has your back can make all the difference.

The Jewel Levine Foundation is one local organization practiced in the fine art of making a difference.

The idea for the Foundation was born of tragedy. Responding to the horrific Boston Marathon bombing incident in 2013, Missy Marquis, then a middle-school student, said, “Dad, we've got to do something!" So, the family got busy. They organized a local charity run and raised more than $2,500 for marathon victims.

Their work didn't stop there. Within a few years, the family had launched the Foundation, named in honor of Missy's grandmother, Jewel, who died after a 14-year battle with kidney disease. To date, the Foundation has raised more than $200,000 for local families in need.

Each year, the Foundation sponsors two major fundraisers—a 4th of July 5k/10k Run-Walk and an annual Crawfish Boil, a much-anticipated event that draws upward of 200 people each March. The early stages of the COVID-19 outbreak threatened this year's event, but Derek Marquis says the team was determined to press forward.

"There's no way I'm letting these people down," said Derek on the eve of the event. "The recipients need this money." Indeed, despite heavy rain and virus fears, the Foundation "crushed" its fundraising goal with the help of the community. "Love and compassion for others always wins," says Derek.

The Foundation has no formal vetting process for selecting recipients. Rather, they learn of individual needs through word of mouth and step in with assistance. One such individual is Stephanie Watkins. Diagnosed in May 2019 with multiple myeloma, Stephanie has undergone multiple treatments, including a bone marrow transplant. She and her husband, John, own a local plumbing business. The illness has left them financially strapped.

"When you own your own business, cancer hits hard financially," says Stephanie. "Whatever we receive through gifts means being able to pay our bills before the water or gas is turned off."

The Foundation learned of John and Stephanie's struggles through mutual friends and stepped in to bridge the gap.

“It really feels like Derek and Amy are God’s guardian angels for people in need; people like me who are struggling,” says Stephanie. "It is heartwarming to know there are people out there who are so loving and giving."

The Foundation provides more than financial assistance. It creates a web of community support for families in need. Erin Jurgensen, whose husband Bill Hannan was one of the first recipients of Foundation funds, marvels at the number of people who stepped forward to ease the burden during his battle with brain cancer. People reached out in small ways—bringing meals, offering gift cards, taking Bill for a drive or visiting with him so he wasn't isolated.

Financially, the Foundation lifted a heavy weight for the couple, who had two small daughters.

"Bill knew his time was limited, and he was working to build a nest egg for us," says Erin, reflecting on the Foundation's gift. "It was such a relief for both of us. I felt more confident leaving my job to care for Bill. To know there were others who loved him and our family gave us such a sense of peace."

The Marquis family knows when community comes alongside people who are hurting and in distress, lives are changed for the good. Compassion, such as that generated by the Jewel Levine Foundation, rarely remains contained. It spreads.

Erin Jurgensen's husband lost his battle in 2017, but her life moves forward in a hopeful way, thanks in part to the Marquis family.

“I don’t know if I will ever be able to truly thank the Foundation,” she says. “But I am going to spend the rest of my life thinking about ways to pay it forward.”

Erin Rodewald is a freelance writer and business owner based in Thousand Oaks. She writes for The Public Square about civil society, community engagement, international religious freedom and foreign policy. Follow her on Twitter at @EDRodewald.