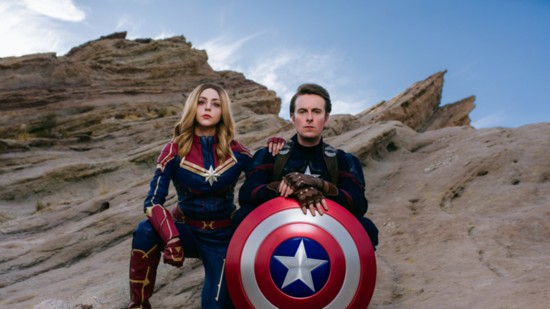 Smile and a Song Brings Dreams to Life

Photography by Smile and a Song Princess Parties

“Once upon a time,” and even today, many a young child has dreamed of being a fairy-tale hero. Joanna Bert is living the dream and helping make girls’ and boys’ storybook dreams come true.

Bert is owner of Smile and a Song Princess Parties. She has stepped into the slippers of Cinderella, Snow White and other characters for hundreds of events.

Her favorites, though, are Rapunzel and Anna from “Frozen.”

“I fit them personality-wise. They’re spunky and slightly awkward. I can be my goofy, fun-loving self,” says the Thousand Oaks resident.

“They have round faces, freckles and huge eyes. I physically am the most convincing as them,” she says.

Bert was an imaginative child, although she had little interest in tiaras and puffy gowns in her make-believe world.

“My favorite movie was, ‘The Lion King.’ I crawled around pretending I was Simba, a male lion cub, belting out ‘I Just Can’t Wait to be King,’” she recalls.

She has always enjoyed “dress-up,” and Halloween was a favorite holiday.

“I couldn’t wear a simple costume out of the box,” she says. “I wanted to be the twins from ‘The Parent Trap,’ a Gryffindor Quidditch team member from ‘Harry Potter,’ or Audrey Hepburn in ‘Breakfast at Tiffany's.’”

Not surprisingly, Bert was a theater kid from the get-go and at the age of 4, wanted to be in musicals. Neither her parents nor older brother shared this interest, but they supported her goals.

As a young actor, she appeared in community and professional theater, as well as won spots in commercials and small roles on TV. She continues to light up local stages. In 2018, Bert won a VC On Stage’s “Vee-Cee” award for her performance as Lina Lamont in High Street Arts Center’s production of “Singin’ In the Rain.”

Besides her acting credentials, Bert has extensive experience working with children. At the Santa Monica Playhouse, she was a performer and taught acting and dance to elementary school children, eventually heading their preschool acting program.

Bert enjoys working with youngsters, and they are drawn to her: “Kids are intuitive and can feel your energy. Even when I’m not in costume and in a public place, they’ll talk to me. I can’t help but interact with them.”

Bert decided to fashion a full-time career that suited her creative interests and talents. She had worked for another party company but wasn’t happy with how the business was run.

“I had a clear vision how I would make improvements and succeed,” she says.

She researched similar enterprises, developed a business plan and—Bibbidi-Bobbidi-Boo!—Smile and a Song was born. It was 2012, and the timing was perfect. With a pantheon of animated princesses popping up on screens and being aggressively marketed, the princess craze was and still is strong.

“Characters are popular because they lead exciting lives and go on adventures,” Bert says. “They’re strong and brave. It’s what kids hope to be when they grow up.” She continues: “Fairy tale heroes face challenges. Kids going through tough times—big or small—see they are not alone. We all can relate.”

With guidance from her father, who has experience opening small businesses, Smile and a Song has prospered and has expanded to 15 performers.

While Elsa from “Frozen”is currently the most popular character, a wide selection of children’s book icons, space heroes and superheroes, like Spiderman, are available to entertain.

“But always try!” she says. “There might be random openings.”

The most popular party is the 90-minute Basic Birthday Package. It includes storytelling, singing, dancing, princess/prince lessons, games, face painting and photos. A deluxe package includes a coronation ceremony with an autographed certificate and a crown for the birthday child. There are options for a 60-minute party and a 30-minute “drop-by” a child’s house or school, as well.

The ideal number for a home party is 15 or less, Bert says.

“That way, the birthday child gets ample one-on-one time with their favorite character.” The target age for a typical party ranges from 3 to 8 years, “although, we do plenty of ‘Alice in One-derland’ parties,” she says.

Appearances aren’t limited to small gatherings. The troupe has entertained at large corporate and charity functions with hundreds of people attending.

“We’re fortunate to be the character company of choice for the Directors Guild of America,” Bert notes. “Last December was our fifth year performing at its annual holiday party.”

Other engagements have included a performance by Elsa and Anna at the Thousand Oaks Civic Arts Plaza’s “Frozen”Sing-Along, a pre-show by the Sanderson Sisters from “Hocus Pocus”for Street Food Cinema at Los Angeles’ Million Dollar Theatre, and a 30-minute original “Alice in Wonderland” musical for tea parties at the Kimberly Crest House in Redlands. Plus, Alice and the Mad Hatter promoted the Los Angeles Chocolate Festival and Pastry Show on “CBS2 News.”

Bert credits her passion as key to the company’s success.

“It’s a boutique company. I like to keep it small and the quality high,” she says, citing her attention to detail that sets her company apart from others.

The performers are trained musical theater vocalists who go through a rigorous audition process.

“It’s important they look like the characters, are talented and enjoy children,” Bert explains. “We aren’t just pretty faces doing high-pitched princess voices. And we’re not exact copies of the films. We work hard putting our own stamp on portrayals, bringing these beloved characters to life!”

She adds, “That’s why we’re well-loved and highly recommended in the community.” Indeed, online reviews are glowing.

It’s not easy owning a business, says the young entrepreneur. But the positives far outweigh the negatives.

One of her most special experiences was when she visited a little girl struggling with cancer. The child was shocked to see her favorite character, Merida, from the movie “Brave,” in her home.

“The foundation I was representing had raised funds for the family’s first trip to Disneyland. I presented the tickets,” says Bert. “I read my story to her and we talked about how brave a warrior she was, just like Merida.”

Bert looked up as the two were singing together and saw the mom’s face full of tears.

“That touched my heart,” she says. “I love knowing we impact lives, fostering imaginations and bringing children and their families joy.”

In those magical moments, it’s easy to believe … all live happily ever after …  THE END.