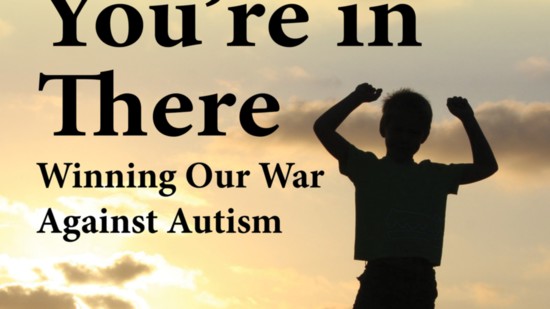 Marcia Hinds and her husband, Frank, were devastated when their 4-year-old son was diagnosed with Autism Spectrum Disorder. The psychiatrist, a leading specialist in the Minneapolis area where the Westlake Village couple then lived, told them he would probably need to be institutionalized.

“That doctor ripped away every dream we had for our child when she said there was no hope,” says Hinds. She was determined to prove the expert wrong: “Parents are ultimately the ones responsible for decisions affecting our children.”

The Hinds met this challenge and found another way for their son. Today, Ryan, now 31, is an aerospace engineer and avid surfer. He has good friends, owns a house and lives a typical life.

Hinds chronicles Ryan’s path to recovery in her book, I Know You’re in There - Winning Our War Against Autism. Originally self-published, an updated version of the book has been picked up by Skyhorse Publishing. It is to be released January 28, and can be purchased in book stores and online.

“I want parents to know they aren’t alone and a diagnosis of autism doesn’t necessarily mean game over,” says Hinds. “ASD can be treatable.”

Autistic Spectrum Disorder is a disability of variable severity characterized by impaired social and communication skills and by restrictive or repetitive behavior. The Center for Disease Control estimates one in 59 children has autism, which is about four times more common among boys.

Possible red flags include avoiding eye contact, resisting cuddles, not responding to their name by 12 months of age, not pointing at objects by 14 months, and not playing “pretend games” by 18 months. Additional signs include sensory sensitivity, repeating words over and over, flapping hands and having obsessive interests. Ryan exhibited many of these behaviors.

“Ryan wasn’t like his older sister, who was affectionate and watched me intently when I talked to her while giving a bottle. Ryan was remote and rarely looked into my eyes,” says Hinds. Instead of crying, he’d scream.

“Mr. Touchy-Feely needed every tag cut out of his clothes and couldn’t tolerate loud noises,” she says. “He walked on his toes and flapped his arms, turned lights on and off, locked and unlocked doors, plugged and unplugged his radio.”

Ironically, when the Hinds were UCLA undergrads, they took a class with Dr. Ivar Lovaas, a pioneer in the field of Applied Behavior Analysis and the first to use ABA to teach children with autism. The couple even worked with children on the spectrum. Yet, they didn’t recognize Ryan’s symptoms. They knew something was wrong but were only too happy to accept the pediatrician’s reassurances.

“Being in denial can waste valuable time,” Hinds notes. “Early diagnosis and intervention is key for better outcomes, although intervention at any age is beneficial.”

Their wake-up call came when Ryan’s preschool teacher told them he didn’t interact, speak or play like other children. Instead of playing with toys, he lined up his cars in rows.

“We no longer could pretend Ryan was okay,” recalls Hinds.

After his diagnosis, the family went from doctor to doctor searching for answers. The consensus was the disorder was untreatable. Then, when Ryan was almost 5, Hinds read a letter in the Autism Society newsletter from a Simi Valley mother who reported her child talked for the first time after medical treatment from a Los Angeles pediatrician. The family flew to California.

The doctor explained to Hinds that autism is actually a condition called autoimmune encephalitis. He ordered a NeuroSPECT scan for Ryan. It revealed the areas of his brain responsible for cognition, speech, sensory information and social skills were inflamed and not getting blood flow. Without knowing Ryan’s medical history, the radiologist concluded autism.

“Maybe if we called autism ‘messed-up immune system,’ more doctors would get on board and provide the medical care our kids need,” Hinds says.

She cautions, however, that one size doesn’t fit all: “What works for one person, might not help another. Treatment must be tailored to individual needs.” Plus, she says, “equal efforts don’t guarantee equal results.”

While no one approach helps everyone, treating autism medically, in conjunction with intense behavior and education interventions, often lead to progress. The Hinds used their own version of ABA and other therapies: “Ryan bit, scratched and pinched us, but we didn’t give up.”

Their hard work paid off.

“When Ryan was a kid, we had to teach him how to smile,” says Hinds. “So when his boss complimented him on his people skills, I knew everything was finally okay.”

Hinds adds, Ryan isn’t “cured,” just recovered. Like diabetics who need insulin, he continues to follow his medical and dietary protocol. Hinds is frustrated with parents who reject exploring treatments because it would change who their child is.

“Don’t tell me autism is a gift and should be accepted,” she says. “Wouldn’t they treat their child’s cancer?”

Hinds is upfront about the despair she felt. “Too many mornings, I didn’t want to get out of bed to face another day of autism,” she says.

The focus on Ryan put stress on her marriage and took attention away from her daughter.

“I tried to counteract that by having special dates and making her an important member of the therapy team,” Hinds says. (After a career in entertainment, Ryan’s sister is now a behavior analyst working with ASD children.)

There was also the heartbreak of watching Ryan struggle to engage with classmates—always left out of their birthday parties.

“It wasn’t until college Ryan understood the social piece of the puzzle and made friends,” says Hinds. Helping your child is a marathon, not a sprint, she says, but worth it.

Hinds gives families hope and helps them navigate the world of autism through her talks at conferences as well as her website and book. Readers’ comments on Amazon express their appreciation for her advice and praise her humor and candor.

Hinds’ primary mission, though, is to spread the word to parents and pediatricians that there is a “gut-brain connection” underlying autism. The scientific community is finally catching up!

One researcher, Dr. Jim Adams, who wrote the Foreword to Hinds’ updated book, has had success using Microbiota Transfer Therapy.

“His trials are a game-changer,” says Hinds.

Adams’ work is highlighted in the June 14, 2019, Smithsonian magazine article: “How the Gut Microbiome Could Provide a New Tool to Treat Autism.”Proceeds from sales of Hinds’ book go to autism research, including Dr. Adams’ study.

“Frank and I had a choice: Let Ryan drift forever into his own world or drag him kicking and screaming into ours, “ says Hinds. “Choosing was easy. The hard part was discovering how to help him. That’s what my book is about.”