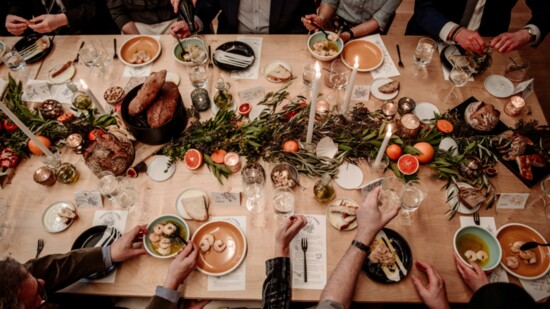 Catering with a Cause

When Heidi Andermack and Amy Brown first met in 2003, they knew they were going to be the best of friends. A year after that, they became co-owners of Chowgirls, a catering business serving the Twin Cities metro.

“As newlyweds, we were doing a lot of home entertaining and I was catering my husband’s art openings and then his friends’ art openings,” says Heidi. “I took it very seriously.

“Amy was working for Random House and coordinating authors’ events and things like that, so we both had our hands in marketing and events as well as this personal passion for cooking and entertaining.”

Instead of just being another catering company, their plan was to use local and organic ingredients that others were not, while also committing themselves to making their community a better place to live.

“We were the first organic caterers in the Twin Cities and received recognition from Minnesota Bride,” says Heidi. “We received the Best Green Caterer Award in 2008, which was an editorial pick that they made up just for us. So within four years, we were getting recognition for that.”

After establishing the use of organic products, they next partnered with Eureka Recycling to start composting. “We were part of a pilot program for restaurants composting in the Twin Cities in 2008,” she says. “Then we became more involved in recycling. I enrolled in Hennepin County’s Master Recycling Program and every year, as our company has grown, so has our commitment to sustainability.”

Another pilot program Chow Girls became involved with was a food rescue program, to prevent perfectly good food from going into dumpsters. “Second Harvest Heartland and Hennepin County both started programs to rescue leftover food from going to waste from restaurants,” says Heidi “They started that in time for the 2018 Super Bowl because they knew that there would be a lot of food waste. That evolved to our chef being on a chef’s council for Second Harvest.”

When the pandemic hit, Executive Chef Liz Mullen called Second Harvest to see how Chow Girls could help. “We were going to have this big beautiful empty kitchen. That phone call was the starting point for Minnesota Central Kitchen which took food rescue to a whole other level.”

Along with Second Harvest, the two women sought out local restaurant owners and asked them to donate surplus ingredients which weren’t going to be used since they had to close. “We turned those into meals,” says Heidi.                  “Within four days of the shutdown on March 13, we were making 500 meals per day, which ramped up quickly to 9000 meals a week. We did that for a full year.” Even though they are now busy with catering once again, they are still committed to Minnesota Central Kitchen and feeding those less fortunate.

Chow Girls handles catering for all different types and sizes of events. From a small dinner party at home to a 2000 plus extravaganza, they want to ensure that the food is always something that hosts and hostesses can be proud to serve.

“We always strive for our food to taste like what you would get in a restaurant or in our homes,” says Amy.

Today, instead of Heidi and Amy doing all the cooking and testing recipes, there is a whole culinary team, including an executive chef, chef de cuisine, Sous Chefs, and a pastry chef, who produce the same quality and taste that the two became known for when first starting out. Their entire staff is congenial and friendly and focused on making every party and every event special, whether it’s a large wedding or a small board meeting.

Chow Girls is currently expanding their offerings with a to-go line. “We will have cheese and charcuterie boxes that are really cool, beautiful fruit platters, and veggie platters and dips,” says Heidi.

Their fall catering menu is chock full of seasonal offerings. “We have crispy baby polenta cakes with a toasty Brussels sprouts topping and then a nice creamy goat cheese,” says Amy.

“One of our more popular items in the fall is our butternut squash soup shooter,” adds Heidi. “It’s a little cup filled with a bisque then topped with a brown butter and pistachio. We also have a roasted organic vegetable platter with beautiful butternut or acorn squash, Brussels sprouts, roasted beets in a variety of colors, and various colored roasted cherry tomatoes and carrots.

“We like to surprise and delight our guests with colors and flavors that they may not be familiar with.” One of their original recipes, an herb crusted and grilled pork tenderloin with a dried cherry rosemary marmalade, is still one of the most requested menu items.

“We are back to catering and are really excited and ready to make your party fancy,” says Amy.

“We’re also taking safety very seriously, so we’re setting standards and working with our clients to make sure we’re meeting their needs,” adds Heidi. “It’s been really great to reconnect with a lot of our clients and help them gather again and be a part of their renewed joy.”

To find out more, or to book Chow Girls for your next party, go to https://www.chowgirls.net.