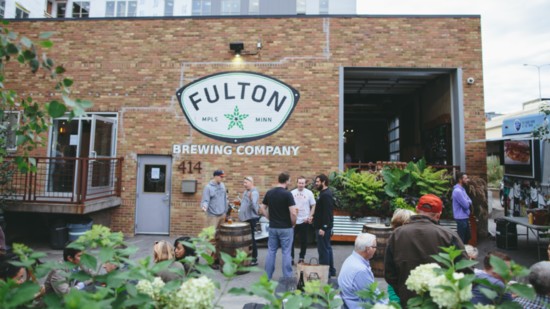 Fulton Gets a Makeover

Look Forward to a Renovated Space

Fulton was founded in 2009 in a South Minneapolis garage filled with dreams of building a real brewery in Minneapolis.  Dreams came true quicker than expected for the owners of Fulton who accidently put together a team that happened to brew great beer.  Jim had the big ideas, Peter built the equipment, Ryan dreamed up recipes and Brian drank the beer.  Then their first employee came along, Mike, who is now the VP of Brewing.

The first step was finding a space to brew.  They found Sand Creek Brewing Company who had capacity for them to brew while learning the business from experienced brewmasters.  Less than a year later they were distributing to over 100 bars in the Twin Cities and signed a lease for their own space in downtown Minneapolis that became Minneapolis’ first taproom.  Before they knew it, business was booming with the taproom and brewing facility, but they were already in need for another brewery to accommodate production needs.  In September of 2013, they found their gem.  A 51,000 square foot building in Northeast Minneapolis that has the capacity to brew 80,000 barrels annually and houses their main office, warehouse and QC/QA laboratory.

Currently, the downtown location is undergoing a remodel that emphasizes the taproom and enhances the customer experience at Fulton. “We are tailoring the building for the taproom experience, so when you walk in you feel like you are in a taproom and not just a warehouse where beer is brewed,” says Jim Diley, Co-Founder at Fulton.

The original space was a 6,000 square foot single tenant building.  The previous tenant was a commercial sewing company, so the space was very warehouse looking.  One of the biggest changes was adding in more windows and taking down some walls to create a more open, airier space.  “The walls were diminishing the brewery and retail space, so removing them creates more space for guests to move around and observe everything around them,” says Diley.  “We also added a vestibule in the entry way to make the space more functional.  Before you had to go up stairs, now guests will be able to enter the patio and building before they get to the retail space.  This creates a better flow for the guest experience.”

You will also find the addition of large 12x10 rollout doors that look out onto the street.  The patio area has been renovated and expanded to be all on ground level versus raised on different levels as it was previously.  The new patio has the capacity to seat over 100 people and of course, it’s dog friendly.

The overall taproom is being revamped with fresh coats of paint and updated lighting fixtures to minimize the warehouse look and feel.  The inside has an occupancy of 250 people, and is a mix of high tops, booths, and built-in banquette tables along with standard bar seating.  The space can also be divided into private event spaces. This allows the community to book large groups, meetings or presentations with part of the taproom still operating for the general public.

A new kitchen is also part of the renovation.  In the past there was a food truck on site, but now there will be a full kitchen offering an expanded menu.  “This will really improve our service and give our customers more variety when it comes to our food operations,” says Diley.

In addition to the taproom upgrades, there will also be changes to the production space.  A 3-barrel brew house is being installed which will allow Fulton to innovate and infuse creativity when it comes to brewing.  “Customers will be able to try new, unique beers that will only be available in the taproom,” says Diley.  “Of course, all of our standard beers will be served as well.  We have the capacity to have 20-30 different beers on tap at a time. This includes our award winning Lonely Blonde beer and the 300 IPA that is a crowd favorite.”

You can look for the newly remodeled taproom later this summer.  “We have the most amazing people who work with us and we are so excited to welcome the staff and neighbors back to one of their favorite spots,” said Diley.  For more information on Fulton Brewery, visit www.fultonbeer.com.