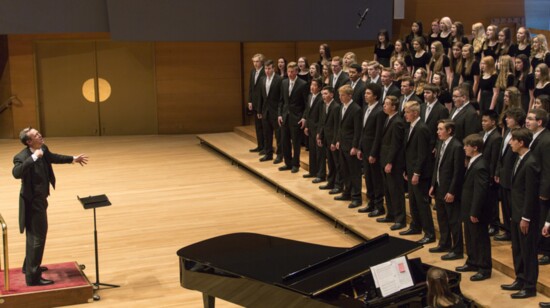 I am a terrible singer. The last time I sang in public I received a sternly worded letter from Amnesty International a week later. I am a terrible teacher as well. I did it briefly in Japan, where I assume there are now several young adults capable only of asking “How are ya?” in an accent thicker than mochi dough.

The point I am leading to is this: Anyone who can both sing and teach very well must be exceptional. That is why Philip Brown of Eden Prairie, who is the director of choral activities at Thomas Jefferson Senior High School in Bloomington, as well as the conductor of the Treble Singers and Cantanti Singers with Angelica Cantanti Youth Choirs, has all of my admiration. I felt that asking him to sing for me would be overstepping my bounds, though his crisp articulation and warm Midwestern accent are both pleasing enough to the ears.

“I grew up in a family that was very supportive of music,” said Philip. “I started learning piano from the local neighborhood teacher when I was five years old, and my parents made sure I practiced. I played trumpet and drums in middle school as well, but I didn’t find singing fulfilling until my sophomore year of high school. That’s when I began to love choir.

“I went to Bethany College in Kansas to major in K-12 music education. I actually went there on a tennis scholarship, but they were gracious enough to let me do both sports and music. From there I went on to get my Master of Music degree in education at Northern Arizona University. I got my first job teaching music at a large high school in Denver. I made a lot of mistakes my first time in front of a classroom, and there were a lot of things I wish I had done differently. Still, I believe moments like those shape us.

“I moved to Minnesota when I was about 25 years old. After a year at North Campus High School in White Bear Lake I went on to teach and coach junior varsity tennis at Hopkins High School, which had a huge choir program at the time. I was fortunate to continue that tradition and expand on it, but after 11 years with Hopkins some family tribulations caused me to look for work nearer to my home in Eden Prairie. I’m now happy to teach at Bloomington Jefferson.

“This is also my 11th year with Angelica Cantanti. Their youth choir program begins at second grade and continues all the way up to high school. Their high school choir was pretty small with only 18 members when they brought me on. As I got more kids to keep singing over the years, however, more and more families started to really value how much Angelica Cantanti offers. We added about 10 kids a year until we ultimately had to add a second choir, and then another one just for trebles and altos.

“Whenever I feel like my students aren’t understanding something, I know there’s some way I have to improve so they can keep elevating their skills. That’s the never-ending challenge of my work. Years ago I remember feeling so envious of teachers and conductors who seemed more successful than me. But by my mid-30s, I realized it’s okay simply to be the best version of myself. Taking that kind of professional envy off my plate and focusing on what I can do to aid my students right now has helped me greatly to develop as an instructor.

“The biggest obstacle lately has been getting kids to sing when they’re not allowed in the same room as each other. I’ve had to find new ways to keep them involved, to still help them grow by holding them to a higher standard. It’s still unfortunate, because singing at their schools and churches fills such an important social element for these kids. The Angelica Cantanti students in particular come from a huge area, and may live in towns where sharing artistic expression with their peers is difficult.

“Musical education embodies everything a liberal education has to offer – music, of course, but also culture, historical context, numerology, even human anatomy and the science beyond how sound is created. Music also teaches a child how to have a strong presence, improving how they will carry themself for the rest of their life. A musician is a well-rounded person, with a better chance of seeing the bigger picture and succeeding in a group environment. The benefit of choir class goes well beyond making better singers.

“As a choir teacher, nothing feels more rewarding than seeing my students continue to express themselves musically. I’ve been with Angelica Cantanti long enough to see kids who started singing when they were seven years old now going off to college. That’s an indescribable feeling. Sometimes I’ll get emails from former students telling me they’re now singing in an a cappella group or their community choir, or even that they heard a song the other day which made them think of me.

“A simple message like that can make my whole week – to know someone’s connection with music has outlasted the time I got to spend with them. It is the greatest reward I could ask for.”

You can learn more about Philip’s many achievements and accolades as well as the programs he teaches at angelicacantanti.org/cantanti-singers.