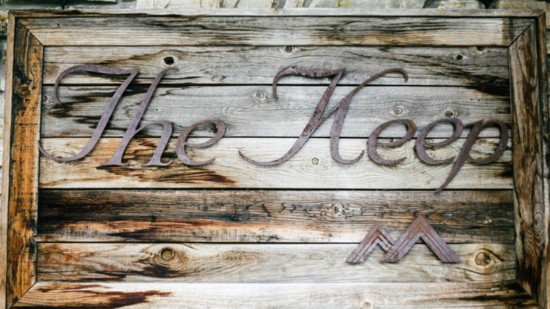 The Keep is still one of Missoula's most treasured places

Chain restaurants come and go but The Keep is, well, for keeps.

Situated at 3,600 feet and overlooking the Missoula Valley, this 1960s building has seen a lot of change, and in time, taken on different lives of its own.

Though the restaurant from nearly fifty nears ago offered a dining experience, its most notable years are those under the ownership of Melissa and Reed Mooney. Since 2007, they’ve cultivated a dining experience second to none, embracing that end-of-work casual vibe while also raising a glass to those wanting to celebrate something special. It is rustic Montana and regal all at once.

“We live in one of the most beautiful places on earth,” said Melissa. “It’s such a tranquil feeling when our clientele can sit and look out at that view while enjoying a great meal in a beautiful building.”

The Keep’s castle-style building adds elegance with iconic architecture and an unexpected turret. Even its stone steps make a click-clack walk in heels feel a bit more stylish.

Inside, an intimate glow from candle-lit tables complements the elegant décor. Bespoke with emerald green walls and hardwood beams, the space feels reminiscent of a time when gentlemen with top hats and canes would swap stories over cigars and brandy.

Tonight, however, with the shimmering cityscape below as the chill of winter settles in for the evening, you can enjoy local craft brews and a selection of tastefully crafted appetizers before the main event. Perhaps a ribeye or halibut. Be sure to arrive early. You can linger in the lounge by the fire and share the intriguing story of how one Missoula home—that’s right, a home—traveled across our valley to claim this special spot on the hill.

The Mansion restaurant—its original name—sat upon this hilltop. A Victorian beauty, which served fancy meals to distinguished couples and prom dates alike, was originally built across the valley in the lower Rattlesnake. Designed by prominent area architect, A.J. Gibson, Thomas Greenough’s mansion was a Nineteenth century spectacle of western wealth. He built on his estate (which now includes his namesake "Greenough Park"). The home had three floors with 22 rooms, six bathrooms, and a ballroom.

Greenough’s daughter, Ruth, and her husband, Art Mosby, lived on that estate until the mid-1960s, when the highway department notified them that their historic home was in the way of the inevitable Interstate 90. Mr. Mosby made several attempts to preserve the building, including his proposal to sell the mansion to the city as a museum. None proved fruitful. Instead, Art Mosby doubled down with a bold plan. He decided to move the entire home across the valley to his Leisure Highlands development in Missoula’s South Hills.

However, moving a 287-ton home across town wasn’t simple. The building exceeded weight limits for every bridge crossing. The answer: split the entire mansion into three pieces. It took several years for the actual move and rebuild to take place. Eventually, the mansion traded up. She became the grandest and uppermost restaurant in Missoula.

Sadly, in 1992, a midnight fire burned the Victorian lady to the ground. One year later, a new building with a distinct Irish influence opened as Shadows Keep. Today, The Keep sits atop The Mansion’s original foundation.

The Keep shares a rich history of love and devotion. That history now includes Melissa and Reed’s love story.

“My husband, Reed, had worked here since 1987 when The Keep was The Mansion,” explained Melissa. “Reed started as a dishwasher in high school and worked his way up to kitchen manager after years of employment and additional schooling at the Culinary Institute. I moved here from Maine to finish college, became a server at Shadows Keep while finishing school, met Reed, and the rest, as they say, is history.”

Aside from its fascinating history, Missoulians may recognize Art Mosby’s hilltop property as the origin of the Highlands Golf Course. This 9-hole layout extends down the hill from the restaurant.

“It’s the oldest golf course in Missoula,” Melissa said. “The course is also part of a 100-year conservation easement, protecting the land from any future housing developments."

In addition to the golf course and restaurant, The Keep also hosts a variety of special events. Its building and grounds can accommodate reunions, business functions, holiday parties, and weddings. In fact, many customers return to dine and share in the nostalgia of their special day.

“On numerous occasions, customers who have had their weddings at The Keep will return every year for their anniversary dinner. The location continues to hold a special place in their lives for years to come,” Melissa said.

For years, a tradition of fine food, warm atmosphere, and Missoula history has resided at the top of Ben Hogan Drive--and it will continue for years to come. As you and your guests leave the table, satisfied by exceptional cuisine, you have become part of that tradition, too. You need only look up on your way out. Above the foyer, a worn, hand-painted sign reads, “The Mansion.”