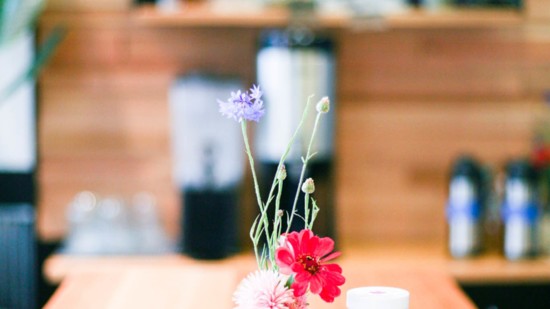 Some Dreams are Delicious

Haniah Sweeney drinks her morning coffee in the afternoon.

She’s not a party-all-night-sleep-until-noon kind of gal, she’s more of a bake-vegan-donuts-all-night gal.

Haniah’s business, Veera Donuts, started as a wild idea to peddle vegan donuts at the farmers’ market. She made 100 donuts for that first Saturday.

“As I was driving to the market, I thought, ‘well, this is probably the first and last day I’ll do this,’” Haniah said. “I had no expectation for people to love it and for it to take off at the first Clark Fork Market like it did.”

She sold out in the first hour.

Since opening her shop at 617 South Higgins Avenue, Haniah and her staff make between 600 to 1,200 donuts every night. The donuts are a luxurious creation of quality (often organic) ingredients that Haniah said are the same she uses in her kitchen at home.

And while she wanted to offer a vegan donut option for her hometown of Missoula, Haniah said it isn’t her goal to force a vegan lifestyle on anyone. Vegans and non-vegans alike can find a tasty treat at Veera.

“My dad is a hunter. I didn’t want someone like him to come in and feel like there wasn’t something for him,” Haniah explained. “I encourage people to just try it. I guarantee you’ll like something.”

From her market days, making up to 500 donuts a weekend for Saturday shoppers, to her now-daily routine, one thing is consistent: building a business requires a lot of guts and a lot of grit. She bartended at Charlie B’s on the weekends and made toppings, glazes, and donuts during the week to sell at the Saturday market.

Sure, there were (and are) naysayers. But Haniah is undeterred.

“People would be hounding me at Charlie B’s: ‘Are you really going to do this? Are you even making any money?’” Haniah recalled.

She watched documentaries about other entrepreneurs, realizing that yes, it could be done.

“I knew nothing about business before this,” Haniah said. “Everything was challenging: numbers, paperwork, wading through health department requirements. I wanted everything to be perfect.”

Haniah and another staff person make the dough, adding other staff for frying and baking donuts during the night hours, literally burning the midnight (non-GMO canola) oil to be ready for the day’s customers.

“People think it’s easy to make a donut, but it really isn’t,” Haniah explained. “I’ve been working five years on my dough recipe and have just now nailed it down.”

Perfecting donut dough is one thing, Haniah said, but building a business has come with a learning curve.

“I’ve stopped looking at Google reviews. I know that I’m working every night, making donuts,” Haniah said. “It’s not a piece of cake. It’s hard work. But I decided this is my life. I’m going to dedicate myself.”

Her commitment is evident through her grinding schedule, no doubt, but also through her obvious love for creating delicious donuts to share.

“It’s still no days off,” Haniah explained. “But I’m so passionate and I wanted my own thing. Sometimes, I can’t believe this actually happened. I sit in my yard with my dog, drinking coffee, and say, ‘there’s a donut shop named after you, Veera.’”