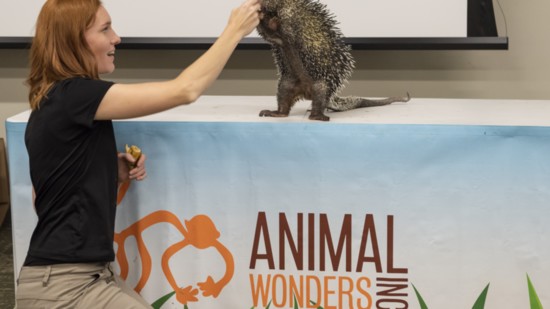 Animal Wonders is informative and entertaining

At a recent birthday party in a quiet Missoula neighborhood, more than a dozen 5- to 7-year-olds gathered in front of a table on which a very old porcupine named Kemosabe sat eating a banana.

At the age of 11 and with only one good tooth, Kemosabe fumbled a little awkwardly with the fruit, but the funny cooing noises he made—not unlike the cartoonish vocals of a Pokemon character—clearly showed his enthusiasm. Kemosabe’s caretaker, Jessi Knudsen Castañeda, scanned the group of children who were about as still as they could be, telling them about how the porcupine was born in captivity and explaining how he used his rodent teeth, quills and feet.

“His favorite food is bananas,” she said, and kids smile and laugh. Underneath the cloth on the table, Jessi had a handful of other animals, each in their own crates, including a boa constrictor named Daisy and a three-banded armadillo named Gaia. She took them out one at a time for the children to see, making sure the animals got some treats and appeared relaxed even in a room full of small, fidgety humans.

Jessi is the co-founder and executive director of Animal Wonders, an educational outreach organization that provides presentations featuring a wide-range of live animals at schools, summer camps, community events, and birthday parties. She and her husband, Augusto Castañeda, founded the program in order to take in animals that needed a home and who could also be ambassadors for educating the public.

When animals are comfortable coming to events, Jessi says it’s still important to read the crowd and make sure the interaction is safe and healthy for both animal and audience. With preschoolers especially, Jessi has learned that taking a break between animal presentations and letting the kids get up and move around, pretending to act like the animals, helps curb their fidgets. The presentation is meant to be fun, but first and foremost she wants people to leave with a more in-depth understanding of the animals.

“I think when you combine information and emotion, the information has a bigger and longer impact,” Jessi said. “People will only care about something that they really understand. My goal is to get them to love the animal. But also—caveat—in an appropriate way. You can love an elephant and know that an elephant doesn’t make a good pet. So it’s about loving the animal enough to do what’s good for the animal, not just what feels good to us.”

In the case of kids’ birthday parties, for instance, some animals are better than others. Parrots often love loud attention. But an animal like the Arctic fox is less than thrilled to be surrounded by chaos. Some animals are requested more than others. Even though they’re not so exotic, rabbits are often asked for at birthday parties. But Jessi says there are some animals with really cool stories that are overlooked, like their brush-tail bettong, which looks like a cross between a rat and a kangaroo.

“They wrap their tails around sticks and branches and hop back to their nest to build it,” Jessi said. “They eat mushrooms under the ground and turn it into sugar poop, which is fertilizing the forest. So they fit wonderfully into a talk about ecosystems. They’ve lost 95 percent of their population in the past 15 years.”

Jessi was born in Missoula and moved to Potomac with her family when she was four. She had cats and dogs and rats, but her love for pets went beyond mere childhood affection and spilled into the realm of preoccupation. After high school, she enrolled in the Exotic Animal Training and Management program at Moorepark College’s America’s Teaching Zoo in California. That’s where she met Augusto and together the two of them hatched a plan to start an education outreach and animal rescue program.

“I called my parents and said, ‘Can I move home with my boyfriend and 38 animals?’” She recalled, laughing. “And they said yes. My parents are amazing.”

Animal Wonders just celebrated its 11th birthday. It has grown in leaps and bounds since its inception, now home to more than 100 creatures including a beaver, skunk, cockroaches and a magpie. Jessi and Augusto have three children and, she says with a grin, they and the animals are slowly taking over her parents’ land. They have a strong following on Instagram and also have developed a YouTube channel in association with the popular YouTube show SciShow, which is produced in Missoula but has a far-reaching audience.

And as for Kemosabe, he has his own series and people from all over the world watch the videos about him and are better educated about his behaviors because of it.