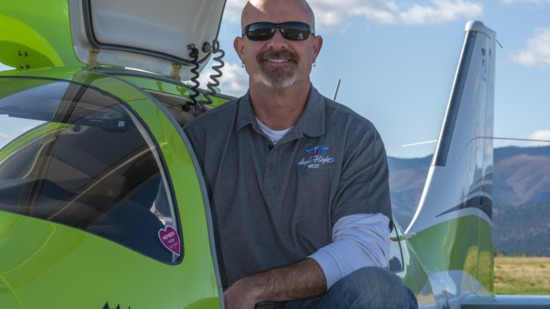 Angels in the Sky

Photography by Open Lens by Pamela

At six years old, Kanynn Vanisko has made 89 trips to Seattle—40 of those trips by airplane. Her mother, Jamie, says Kanynn loves to fly. She even sleeps right through the turbulence, which is amazing considering she flies on a private plane, not a commercial jet.

Kanynn fights a disease so rare it doesn’t have a name.

“She does not have a textbook diagnosis,” Jamie explained. “We don’t know what her future holds.”

One thing that is certain? The Vanisko family relies on Michael Burks, a Missoula-based pilot and businessman, and his Cessna TTX.

Michael volunteers his time and his plane to Angel Flight West (AFW), a nonprofit that arranges free air transportation for patients traveling for medical treatments.

“I really never thought about aviation until my son asked to start flying lessons on his 18th birthday,” Michael explained. “I went up with him on his first check ride and from the back seat, absolutely fell in love with being in a small aircraft.”

Michael immediately started flight training of his own, earning his license in ten weeks. He flies every chance he gets.

“It’s the only way I can get away from the chaos that comes with running 13 corporations with over 300 employees,” Michael said.

And, he says, there’s nothing that keeps you more grounded than helping others.

“I was simply scrolling through Facebook and saw a sponsored ad,” Michael said. “In early 2017, I was still extremely new to flying and wanted to get as much as I could out of it, so it was an easy fit.”

Angel Flight pilots donate 100 percent of their costs—Michael’s plane runs approximately $100 per hour, so no family or patient pays a dime for their flights. Add in the convenience of avoiding TSA and busy airports, and you’ve got a pretty significant difference in the lives of Angel Flight families.

“I used to travel alone with a car seat, luggage, stroller, and a baby through Sea-Tac every 16 days,” Jamie explained. “It was a nightmare.”

The financial burden of traveling for treatment is also a nightmare. Kanynn’s health declined in April of 2018, forcing Jamie to quit her 17-year career in traffic control.

Wes and Callie Ross live in Great Falls with their son, Troy, whose condition requires frequent trips to Missoula for treatment. The Ross family met Michael at a Jadyn Fred Foundation benefit in the summer of 2019.

“The one thing that stands out to me is the amount of relief Angel Flight can give a family that is very seriously hanging by the threads,” Callie explained. “Wes and I both work full-time, have another child, and have been balancing the treatment schedule for over two years. We can’t always stay at hotels or take multiple days off work, so we were often leaving at 4 a.m. and getting home close to midnight. Allowing our family to not have a six-hour trip in one day is a huge relief beyond words.”

According to an AFW fact sheet, the organization’s pilots have completed over 54,000 missions, totaling more than 321,000 hours and 15.9 million miles flown, which is the equivalent of $38.9 million in donated flight costs.

“We need more pilots in Montana to be able to handle the increase,” Cheri said. “It’s likely the need has always been there, but the rise in online support groups, social media, and other online resources, along with concentrated efforts on our part to reach out to health care providers, has spread the word to more who need the service.”

Michael has nearly 100 missions under his belt with Angel Flight, more than 50 in 2019 alone.

“I just love flying and love helping those in need, so taking on a mission is an easy decision,” he said. “Kanynn colors pictures for me, brings me candy and coffee, and has the biggest smile anyone could ever ask for. That in itself is enough for me to get in the cockpit and fly wherever they need to go.”

Personal connections sit at the heart of the Angel Flight West mission. In her 22 years with AFW, Cheri has accumulated mounds of inspiration and even landed herself on the holiday card lists of some AFW families.

“The stories of the passengers and the difficult journey that so many of them have to face really puts everything in perspective,” Cheri explained. “You work with parents who have children with diseases and conditions that would stagger anyone, yet you see photos of them laughing and enjoying their flights. It is a testament to the strength of the human spirit.”

Cheri reports that the Montana wing of AFW is composed of 31 pilots. Five of those are located in Missoula (two of whom fly regularly).

“For pilots, it’s the best way to use your flying skills,” she said. “It will be the most rewarding flying you ever do.”

Michael said that the tax deductibility of expenses provides an incentive, but as he talks about AFW, it’s less about the write-off and more about helping others.

“Getting to know these kids and parents is a blessing for me. If I ever think I’m having a bad day, all I need to do is have a four-year-old cancer patient give me [knuckles] with the biggest grin on their face and all of my personal issues seem absolutely insignificant,” Michael said.

He talks about an AFW awards banquet in San Diego: “There were hundreds of pilots, Earth Angels, and volunteers. It was an incredible atmosphere. Not one negative aspect. In a time of such turmoil and negativity in our lives, I didn’t want the meeting to end. It was so intoxicating: smiles, hugs, and high fives. We all came out of it with huge smiles and so much motivation to continue helping while doing what we all love to do—fly.”

Jamie hopes more pilots will pitch in to fly with AFW.

“We would not be able to get Kanynn the care she needs if it was not for the amazing pilots and this awesome organization. We have met some pretty amazing people through our struggles,” she said. “It’s a reminder that no matter what you go through, someone else has it a little tougher.”

To become a pilot or for information on transportation to medical treatment, contact Angel Flight West through its website.