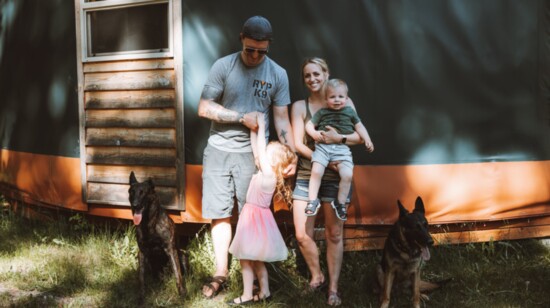 Attention all canines: if you’re a dog in need of training, Chris Williams is your human. Chris and his wife Caite are the owners of Run Your Pack, a dog training facility located on an idyllic plot of land just outside of Clinton.

For years, Chris had a career in the television industry but his fascination with dogs has been part of him for a long time. During college he attended a photoshoot involving an Iditarod musher.  The musher offered him a job, which he took, and he used his earnings to save up for his first puppy, a Shiloh Shepard he named Schuck. And like all people with their first puppies, the mention of Schuck still brings a lump to Chris’s throat.

“He’s the whole reason we’re here,” said Chris. “He became my catalyst for learning about training. I became obsessed.” Schuck is forever immortalized on the logo of Run Your Pack.

Chris continued working in the film and television industry with dog training as a hobby. Five years ago he decided to trade in the career for the hobby and started Run Your Pack. Chris offers multiple levels of training from basic puppy training to more advanced training for working dogs, which can range from tracking skills to bite or protection work to shed hunting.

Chris said, “Dog training is a little bit of an art form but there’s no mystery to it. You just have to know how the dog thinks, know what they’re excited about, and speak their language. But it’s not magic or a higher power.”

If you choose to have your dog trained with Chris and his team, be ready for some training yourself. As their website states, “We are both dog and human trainers.”

“It doesn’t do any good to train the dog alone,” Chris said. “We have to teach patterns that we can then transfer to somebody else who can build on those patterns.” He believes any dog can be trained. “The key is deciding if the handler (owner) has the time, lifestyle, and dedication to work through it.”

The training process begins with Chris and his team teaching dogs at Run Your Pack’s headquarters up Schwartz Creek in Clinton. Chris conducts private lessons with puppies. Older dogs are boarded on-site throughout the training process. The dog’s handler will join in after the initial training sessions to learn the process and continue the training. This system helps Chris impart the “why” to handlers such as why the dog exhibits a certain behavior.

“We teach the dog secrets and I don’t want the dog keeping those secrets to themselves,” said Chris.

Once the basics are in place, Chris can get creative and teach your dog to ride a paddleboard or get into the working disciplines. Chris explains working disciplines as, “Us channeling the primal nature of the dog in the way that works for humans.” Dogs like to hunt, track, chase, and bite. “This training allows us to celebrate these traits. Let them be the dog,” said Chris.

The individual disciplines within working dog training range from search and rescue to protection to tracking. Chris has done some work with local law enforcement and their K-9’s but he’s seen a real uptick in civilian interest in working-dog training. With dogs’ 300 million olfactory receptors in their noses, compared to humans’ six million, their ability to sniff out any substance or item with a scent attached opens up a wealth of possibilities. Chris appreciates it when his clients get creative. One asked to train her dog to sniff out morel mushrooms. Some want to have their companion join them in shed hunting or wounded game recovery if their shot wasn’t right on the mark.

“The industry has primarily been defined by law enforcement and military but that doesn’t mean they have to be the only one with cool dogs,” said Chris. Prior to COVID he began working with a high school student who wondered if it was possible for a dog to sniff out water tainted with the giardia parasite.

Whether it’s training your new puppy to not chew your shoes or training your adult dog to track, Chris and the team at Run Your Pack are ready to help both you and your pooch.  “Dogs can get just as much from us as we can from them,” said Chris.