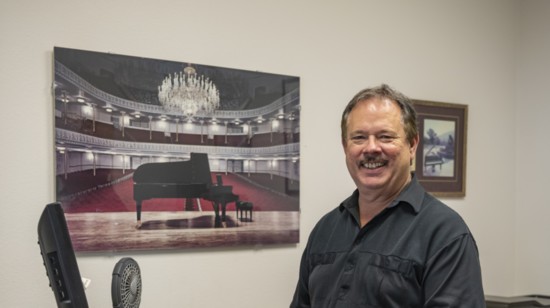 Instrumental to our Community

Morgenroth Music Centers is home to your musical needs

Photography by Open Lens by Pamela

The great Chinese philosopher Lao Tzu once said, “Music in the soul can be heard by the universe.” Nobody demonstrates this philosophy better than Gary Bowman, owner of Morgenroth Music Centers. Yes, he owns a store that sells music and instruments, but in no way is that music confined to a brick-and-mortar business.

Gary first started playing the accordion at age 7, then the piano and organ in high school. He put himself through the University of Montana playing in Missoula’s nightclubs. In 1977 Gary went to work for what was then Dickinson Music. Nine years later, he purchased half the business. In 1989 the Morgenroth family bought the business, including Gary’s half. He could have moved on but music is in his soul, so he stayed on as an employee. Twenty-four years later, Gary would buy the entire business back.

Today, Morgenroth is most notably known as the place to go for renting band equipment. They work with schools all across Western Montana to give every student the opportunity to pick up an instrument. September is Gary’s favorite time of year because, he said, "I just love seeing a fifth grader come in with their eyes so big! I remember that feeling.” As he said this his eyes brightened and his cheeks reddened. It’s not hard to see fifth grader Gary.

“Some of those kids grow up to do cool things,” said Gary, like his former customer who now writes television music in Hollywood.

Western Montana’s only full-line music store has so much to offer. Their retail includes pianos equipped with technology like Smart Key that connects online to help students learn their favorite songs. Looking for a music teacher? Just come in and pick up a list of Missoula’s best or ask about violin or piano lessons that are offered in store. Need a repair on your brass instrument or guitar? No problem. Looking for obscure music? John at the front desk is the print music guru. Not ready to commit to an instrument just yet? You can rent or rent-to-own. Need sound reinforcement for your school or church? They’ve got you covered.

If this was all Morgenroth Music Centers offered, that would be enough, but music in the soul doesn’t stay in a building. Employees Steven and Scott play in the Alumni Marching Band with Gary. Jim in repairs plays the saxophone. Marko in sound reinforcement and David in rental accounts play guitar. John plays piano. Even Office Manager Mary plays the clarinet. Several of them play in the Missoula Children’s Theater pit orchestra.

Gary himself is our beloved Missoula Marathon pianist. It’s no small feat to set up a grand piano on uneven lawn in incremental weather, but his music lifts tired bodies and gives them renewed energy. Seeing him in a full tuxedo along the river is what so many runners look forward to every year. And as if playing the piano wasn’t enough, Gary also sings in the Missoula Symphony Chorale and the Missoula Community Chorus.

“Music in the soul” isn’t just about playing, it’s about doing. In that spirit, Gary serves on both the University’s Advisory Board to the College of Visual and Performing Arts and the board for their Jazz Program. Morganroth Music Centers offers donations and scholarships to Missoula County Public Schools as well as Missoula Children’s Theater.

When asked what inspires him, Gary enthusiastically replies “Missoula’s music teachers!  Missoula has awesome teachers. School District 1 is nationally recognized.” He goes on to talk about how so many teachers spend their own money on supplies because “they truly want kids playing. They just get it.” His own former teacher Molly Morrison continues to inspire him in her “advocacy for helping students” and the way she is moved by them.

Morgenroth Music Centers is not simply located on Sussex Avenue. It’s in our schools, our theaters, our homes. Putting an instrument into the hands of a child opens up a whole new world for them. Donating a piano to MCT gives both actors and audience the opportunity to get lost in a different story. Connecting a student to a teacher allows both to grow and learn. Sharing their music and their souls with Missoula is how Gary and his staff inspire the rest of us.

We hear you, Gary. Loud and clear.